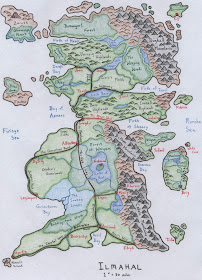 Here is the map of my 'homebrew' campaign setting, 'Ilmahal.' (I drew this map in September 2003.)
Below is a brief overview of the setting. I'm in the process of thinking about possible revisions to it, and so will wait a little while before posting more detailed notes.