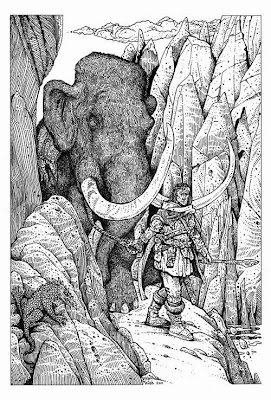 I praised the work of Russ Nicholson in an earlier post. Much to my delight, Goodman Games has posted a gallery of some of his work for their forthcoming ‘Dungeon Crawl Classics’ RPG here.
While I’m not thrilled about the DCCRPG – at least based on the 'beta' preview provided several months ago – the art for the game may get me to purchase a copy nonetheless!
Posted by Akrasia 2 comments:

Check out the new Hobbit trailer!
Posted by Akrasia 2 comments:

Legend has gone with a far, far bigger bang than we expected. As I write this, we have already blasted through the first printing run and the book sits at the top of the Drivethru charts with the first supplement, Monsters of Legend, fast chasing it.

We had intended this game to be a continuation of the RuneQuest II mechanics, allowing us to provide support indefinitely for existing customers. Instead, it rather seems to have taken a life of its own!

This is, I believe, due to a number of factors, not least of which is that Messrs Lawrence Whitaker and Pete Nash designed a rock solid fantasy system that ticks all the right boxes. Added to this, the new format and the low price of £10/$19.99 means that instead of just buying one book, you can now get one for every player at the table for much the same price. We released the PDF version for just $1. We made the entire book (in fact, the entire core range) Open Content – not via an SRD but literally all the text of the books. Finally, we promised a quick amount of support material, from Monsters of Legend and the free Spirit Magic download, to brand new material for our various settings.

So, what have we got planned for Legend through 2012?

We are busy converting all our ‘historical’ settings over to the new format, so you will see Vikings of Legend, Pirates of Legend and Samurai of Legend in the first few months of the year. Again, all of these will also be 100% Open Content.

Cities of Legend (also Open Content) will start appearing fairly early on, each providing a full fantasy city that can be placed in just about any campaign. Each city will be mapped out, a short history included (just enough to start linking it with the rest of the campaign world, whichever one that may be) and all the interesting locations, characters and events detailed. And then there is Arcania of Legend, introducing new and varied magic systems to the game, allowing you to pick and choose which you want to use in your campaign worlds. That kicks off with Blood Magic.

We weren’t going to do a GM’s screen for Legend but, given the demand we have seen for one of late, we may have to! And yes, it would be landscape format.

Elric of Melnibone will be getting two new supplements early in the year, Secrets of the Steppes and Talons of Winter. The first describes a vast wilderness in the Young Kingdoms we have yet to touch, the latter a true sandbox campaign set within the steppes. We are already talking to several writers about new Eternal Champion material for later in the year, and we hope to have both Hawkmoon and (finally!) Corum out before too long.

Then there is Historia Rodentia, a new setting for Legend that came about from a chance meeting at Gen Con 2011 with On The Lamb Games, when I saw their range of miniatures for Brushfire, the tabletop version of the RPG. This is a very cleverly constructed setting that looks simple on the surface but has all kinds of interesting subtleties when you start digging beneath the surface. The basic premise is that of a world populated by intelligent animals, but one that mirrors our own.

For example, the soldiers of Axony appear as bulldogs in British Army colonial uniforms (think Zulu). However, Axony is populated by both cats and dogs, and has recently come out of its Civil War and… well, I think you can see where this is going. The English Civil War in this world was not fought between parliamentarians and royalists but cats and dogs. Other nations around the world get similar treatment and I personally am planning a campaign based on the exploits of Sharpe and the Chosen Men in their wars against the Empire of Aquitar (France, populated with moles, badgers and weasels). Overall, Historia Rodentia is not entirely serious but the characters within take themselves very seriously indeed. We’ll be previewing this soon, and it is one to look out for.

Our own RuneQuest II settings, Deus Vult and Wraith Recon, will be continuing apace. Our own Charlotte Law has been working on a sourcebook for Deus Vult, covering the city of Rouen (if you have read our Deus Vult novel, Sister Devout – available at Drivethru and on Kindle – then you will already know what a hotbed of cults and corruption 12th Century Rouen can be!), and we are talking to other writers for more material to appear later in the year. The RQII books for both of these games are already fully compatible with Legend, and we will be keeping them available until their stock is gone, then republishing them in the new Legend digest format.

And then there is third party setting, Age of Treason, for which we believe a new supplement is already in the works! One way or another, 2012 will see an awful lot of support for Legend.

I’m glad to see that Legend is doing well, even though I’m confident that RuneQuest 6 will prove to be the superior RPG. (After all, RQ6 is not simply a ‘scrubbed’ version of MRQII, but rather a revised and improved version of MRQII by that system’s co-creators.)

Especially interesting is Mongoose’s plan for the Eternal Champion series. It looks like Mongoose will not simply be ‘repackaging’ their back catalogue for Legend, but actually will be coming out with some new products for the line. While I’m not holding my breath for a Legend-based version of Corum, I certainly will pick it up should it ever appear!

The Cities of Legend supplement also sounds intriguing. On the other hand, Historia Rodentia sounds positively dreadful, the kind of product that makes my day a little worse simply by implanting an aesthetically unpleasant concept in my sluggish brain.

More positively, Age of Treason sounds intriguing. And it’s nice that everything in the core Legend book is Open Content!

Sale on Lamentations of the Flame Princess PDFs

Fans of the old school RPG products of the Lamentations of the Flame Princess publisher may be interested to know that there is a sale on a number of LotFP pdfs over at DriveThruRPG. Many items are available for only 1.35 USD.
I (finally) picked up Vornheim, about which I have heard many positive things.
Posted by Akrasia 1 comment: 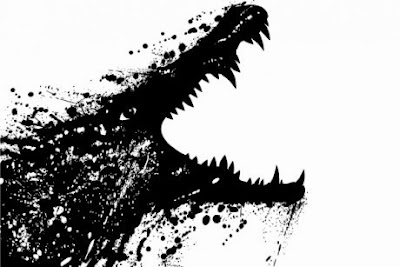 There is an interesting – though very speculative and somewhat rambling – article entitled ‘Why We Invented Monsters’ over at Salon. People familiar with this blog may find it to be an enjoyable, if unusual, read. It’s not really scientific (despite its pretensions), but certainly grist for a chat over a few pints… 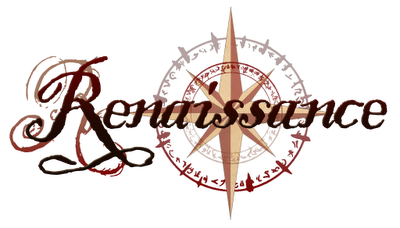 As I mentioned in an earlier post, Cakebread & Walton have taken Newt Newport’s excellent OpenQuest system (essentially a ‘rules light’ version of RuneQuest, with some bits from Stormbringer thrown in), and retooled it for Renaissance-era fantasy role-playing. Their new system – called, appropriately enough, ‘Renaissance’ – will fuel the second edition of their excellent campaign setting, Clockwork & Chivalry.

Cakebread & Walton are pleased to announce the launch of the Renaissance System Reference Document, available for free download. The Renaissance system is a new D100 system based on Newt Newport’s OpenQuest, and is designed for historical and fantasy gaming in the age of black powder weapons. Released under an Open Gaming License, which allows companies and individuals to incorporate the rules into their own games, it features familiar mechanics, grim and gritty combat, extensive period weapons and equipment lists, dozens of professions, and rules for factions and belief systems. It also includes two magick systems – the powerful battle alchemy first introduced in Clockwork & Chivalry 1st Edition, and a streamlined and expanded version of the witchcraft rules from the Silver Oggie Award-winning supplement Divers & Sundry.

Renaissance can be downloaded in two forms: as a zip folder containing all the Word files needed to introduce the rules into your own system, or as a printable PDF for use at the gaming table.

Also released today is a 40 page preview of the forthcoming Clockwork & Chivalry 2nd Edition Core Rulebook, due out from Cubicle 7 Entertainment in January. This 400 page rulebook incorporates the Renaissance system into a fantasy world of mud, blood, mayhem and magick, in an alternate 17th century England where the giant clockwork war machines of Oliver Cromwell do battle with the battle alchemists of the Royalists, and Adventurers struggle to survive in a world of religious persecution, splintered politics, corruption, ghouls, witchcraft and chaos.

The Renaissance system will form the engine for all future Clockwork & Chivalry releases, as well as other exciting new Renaissance products for 2012 and beyond. Products in the pipeline include the first four volumes in the Kingdom & Commonwealth campaign re-released in two omnibus editions (currently in preparation), followed by the final two adventures in the series, Hobbes: Leviathan and London Calling; a series of “pick-up-and-play” books for the Renaissance system, including Clockwork & Cthulhu and Clockwork & Deviltry; and a new “airships and flintlocks” fantasy world, Realms of Gold, featuring, faeries, shape-changing lizardmen, plunder, pirates and revolution in a world almost, but not entirely, unlike our own.

I’m especially intrigued by the reference to a ‘Clockwork and Cthulhu’ book, which is something that I would snap up in a second!

Overall, I must say that it is good to see that Cakebread and Walton not only have survived the unexpected early end of MRQII, but now are authors of their own destiny with Renaissance!