Here is a ‘status update’ on RuneQuest 6 from co-designer Lawrence Whitaker (‘Loz’) over at the Design Mechanism forum:

Here's the progress so far.
Playtesting
Our stalwart playtesting crews have worked they way through character creation, skills, equipment and combat chapters putting each to the test, suggesting revisions, identifying problem areas and highlighting what's worked very well for them. The input has been great and Pete and I spent time during the recent Petecon to address each point and challenge and integrate them, where necessary into the rules fabric.
The above chapters, along with Creatures, are nearing completion and will soon be sent for editing after we've completed some minor additional revisions.
Magic
RQ6 will have five very different magic systems: Folk Magic (Common Magic as was), Animism (spirit magic), Mysticism (brand new), Theism (Divine) and Sorcery. Initial writing is complete on three fifths of these and will form the next round of playtesting.
Folk Magic is a radical revision of old Common/Battle Magic. We've de-emphasised the combat aspects and vastly increased the more utilitarian spells. Old favourites are still there, but every spell has undergone a substantial degree of revision. Mysticism is completely new and aims to allow characters to replicate all manner of wuxia, martial arts, ki, and other powers that focus on self-realisation and potential. Its not a spell-based system, but it does have a very wide range of different effects/talents to offer considerable flexibility. Animism is a complete overhaul of the old spirit magic rules to clarify, expand and explain the system in detail. Theism and Sorcery are next up and these will, again, be overhauled with an eye on flexibility.
Creatures
A huge chapter, there's a wide range of beasties and mythical monsters along with playable races - each with character creation guidelines. Old favourites are in there (but no specifically Gloranthan critters) along with some new additions. We've tried to give each creature or race a unique spin making for more rounded creatures than simply things to butcher and steal from. Expect extensive rules for how creatures react and fight, along with guidelines for creating your own.
Art and Layout
Art is commissioned and we have a team of three very talented artists working on illustrating the book. Having seen some of the sample art, I'm very impressed and once we're in a position to share some of it I'll post samples on the DM website. But work is still underway, so patience please!
We have also commissioned a professional layout guru to work on the book's presentation. Clean, readable and easy on the eye is the overall theme. There'll be no intrusive borders, good use of white space, consistent and recognisable design elements, and a book that should look good in dead tree and PDF versions that remain printer-friendly.
So a lot has been happening and RQ6 has taken several bounds towards realisation. There has been some project slippage due to personal lives and Real Life intrusions, but nothing that has significantly delayed our progress.
Thanks for bearing with us.

And what is coming for RuneQuest 6 after the publication of the core book? According to a post by Loz over the RPGsite, quite a few cool things:

Monster Island and Book of Quests will be the follow-up releases. Monster Island is intended to be a mixture of bestiary, campaign setting and GM guide/resource. Think along the lines of Griffin Island and you'll be hitting the mark.

Book of Quests will be a series of loosely-linked S&S scenarios that can be easily strung together to form a complete campaign or played as one-offs. I'll be co-ordinating this project, developing background and writing one of the scenarios, but otherwise we'll be soliciting external contributions.

After these, we have plans for historical works: Mythic Greece (Pete), Mythic Briton (me) and Mythic Constantinople (Michael O'Brien). We also have plans for a Sword and Sorcery/Dying Earth setting book and are working towards a licensed property that we absolutely won't discuss with anyone at this stage of things. So don't ask...

In other words, Lots.

I inquired there about the ‘Sword and Sorcery/Dying Earth setting book’, but Loz cruelly withheld any further details. However, I discovered a tiny snippet of information in a description of a game that Loz is running at the ‘Spellstorm’ convention, taking place in the blasted wastes of Etobicoke:

The Exodus Matrix: a Swords and Sorcery scenario set in Scourged Earth that sees the player characters hunting the priestess of a long-dead Witch-Queen.

The ‘Scourged Earth’ — that has a nice ring to it!
2012 should be a great year for RuneQuest fans…
Posted by Akrasia 6 comments:

Crypts and Things is Now Available! 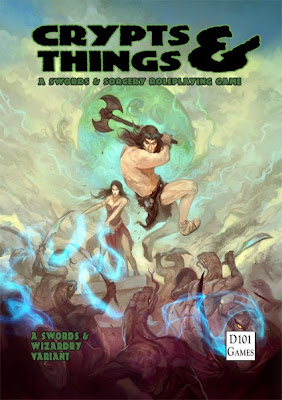 More info on Crypts and Things is available at this post over at Newt’s blog, as well as the d101 Games website.

I received my two hardcover copies last week, and they are truly stunning!

I’m thrilled to have had some of my ideas included in C&T, and look forward to playing more C&T in the future, as well as learning of others’ experiences with the game.

The Retired Adventurer is Active

Despite it's name, the blog 'The Retired Adventurer' is very active!
Author John Bell (whom some of you may know as 'Pseudophedrine' from various gaming fora) has been extremely prolific since starting up the blog just over a month ago.
I urge anyone with an interest in OpenQuest, RuneQuest (viz. MRQII/Legend/RQ6), and/or Swords and Wizardry to check it out. There is a lot of interesting stuff to be found there.
Posted by Akrasia 2 comments:

The ‘Open Beta Version 0.7’ of the Novus fantasy role-playing game (from Firehawk Games) is available at RPGNow.
The author of Novus is Tim Dugger, who was one of the main designers of ICE’s well-regarded HARP game (‘High Adventure Role-Playing’), as well as the superb Rolemaster Express book. I’m especially fond of the latter work, as it condensed the core elements of Rolemaster Classic (i.e., 2nd edition) into a succinct 88-page book. Not only was Rolemaster Express a great introduction to the Rolemaster system (certainly the best since the days of MERP), it also helped to debunk the widespread myth that Rolemaster is an overly complicated RPG. (Alas, it no longer seems to be available from the ‘new ICE’.)
Anyone who liked the RPGs of classic ICE should check out Novus. It is a new system – not simply a reworking of old ideas – but its ‘feel’ is very much in keeping with Rolemaster Classic and HARP. (For instance, Novus’s ‘exploding dice’ evokes RM’s ‘open-ended rolls’.)
The ‘text-only’ version is free for the near future, so really, there is no reason not to check it out!
Posted by Akrasia 4 comments:

At long last, the post on my second-favourite FRPG artist of all time: Angus McBride!
(A brief recap of the artists covered hitherto: number five is Russ Nicholson; number four is Peter Fenlon; and number three is the Erol Otus.)
I know McBride’s work primarily from the covers he created for ICE’s line of Middle-earth products (the core rulebook and many campaign modules), as well as ICE’s core Rolemaster rulebooks. Since I was an avid player of MERP (‘Middle-earth Roleplaying’) throughout most of the 1980s, many of my books were graced with McBride’s work.
Here are some of my favourite McBride pictures from his work for ICE: 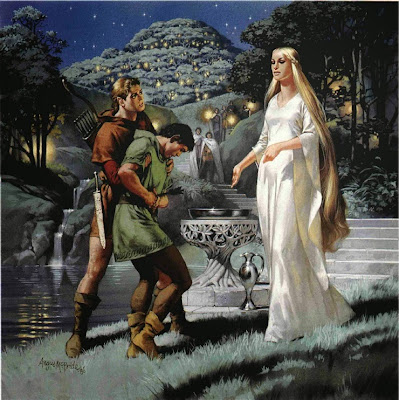 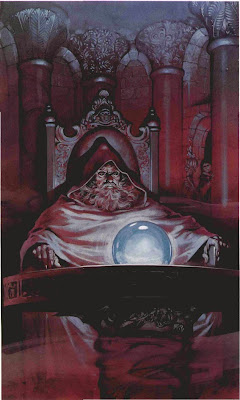 (Saruman gazing into the Palantír of Isengard. What could possibly go wrong?) 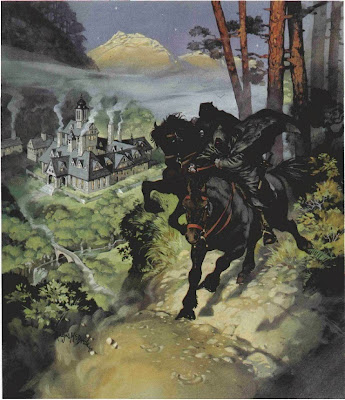 (Nazgûl riding as close as they can to Rivendell) 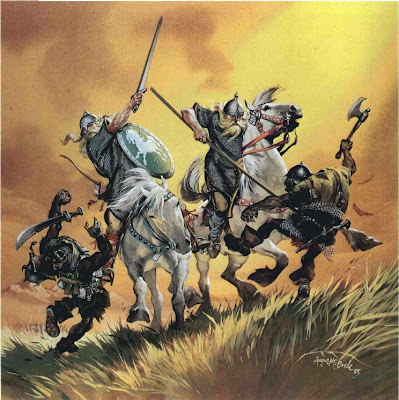 (Two Riders of Rohan making short work of some orcs) 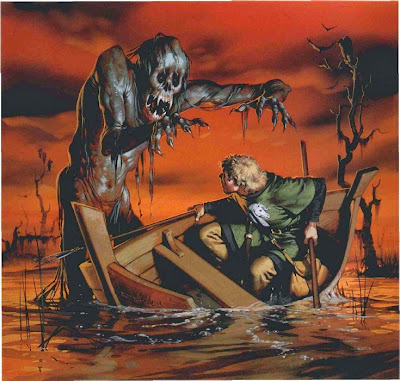 (This Rohir, though, looks to be no match for this Mewlip!) 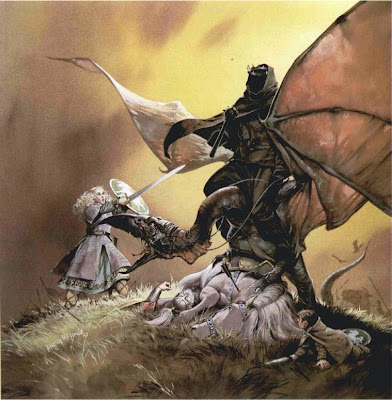 (Éowyn confronts the Witch-King over the body of King Théoden) 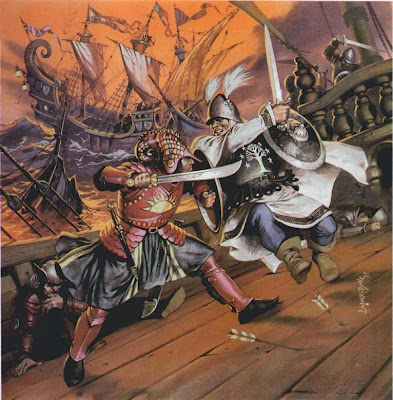 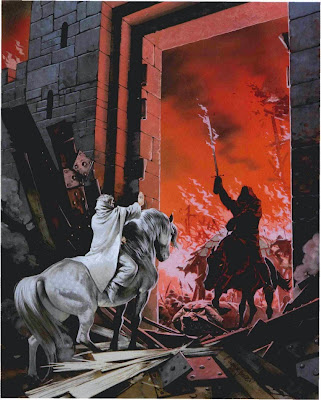 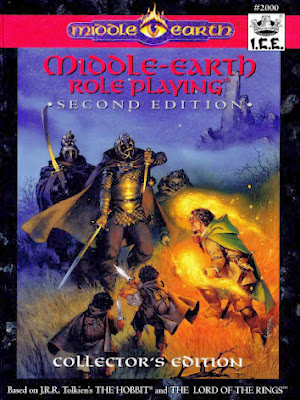 (The cover of the second edition of MERP, displaying Aragorn driving away the Nazgûl on Weathertop) 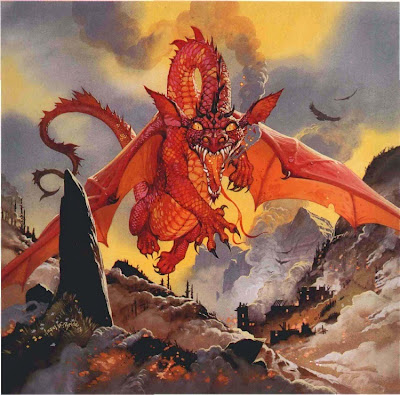 (And last, but not least, Smaug the Golden!)
Sadly, McBride passed away in 2007. I am very grateful for his legacy of wondrous work. In my mind’s eye, at least, Middle-earth will always look the way that McBride depicted it!
Posted by Akrasia 6 comments: