James Mishler has closed his company 'Adventure Games Publishing' and his blog 'Adventures in Gaming'.
I had a subscription to AGP, and thought that the products that I received -- XXXI; Campaign Map 18 (Southern Reaches); Adventure Gaming Journal #1; and many Castles & Crusades PDFs -- were uniformly excellent.
Fortunately, James has not gone away completely. He has a new gaming blog here.
Posted by Akrasia 3 comments:

Mixing Potions Can Be Dangerous

I just ordered The Varieties of Liberal Feminism and The Savage Sword of Conan (vol.4) from Amazon, and requested that they be shipped in the same package (to save on costs).
I wonder if the package will explode en route?
Posted by Akrasia 10 comments: 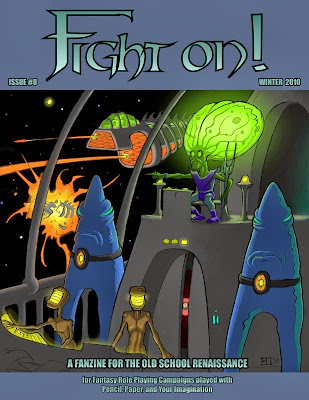 The eighth issue of the cutting-edge old school 'zine Fight On! is now available -- with a brilliant cover by old school master Erol Otus!
The blurb:

Excellent stuff, eh? Another brilliant job by Calithena and the soldiers of the OSR. A paper version of the mag can be purchased here (PDF version here).
(No contribution by yours truly in this issue, alas. These days I only have time to write game material during the summer.)
Posted by Akrasia No comments: 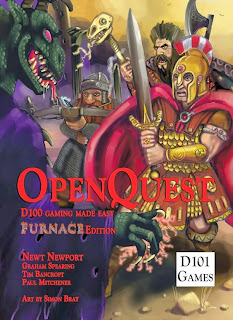 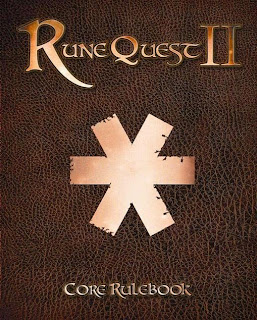 OpenQuest is a fantasy-role playing game by Newt Newport that makes use of Mongoose’s SRD for RuneQuest I as a base, but builds its own ‘simplified’ version of classic RuneQuest. Mongoose’s RuneQuest II, by Lawrence Whitaker and Pete Nash, is an overhaul of Mongoose’s earlier attempt to resurrect the classic game, and allegedly overcomes many the rules problems with the earlier ‘MRQ’.

Here are some of my initial impressions of both games. Important caveat: While I own both of these great games, and have looked through them many times over the past few weeks, I have not 'mastered' the rules of either yet. So please take these initial impressions with a grain of salt. I welcome corrections, comments, and different perspectives!

OpenQuest definitely is the 'lighter' of the two systems. Among other things, it has a shorter skill list, and does not use hit locations (although MRQII does have an optional rule for 'general hit points' for 'lesser' or unimportant NPCs). OQ's combat system lacks certain interesting things that MRQII has (e.g., combat manoeuvres), but, personally, I prefer a fast-moving but 'simple' combat system to a complex and 'interesting' one that can take up more time. So, given my personal taste on this matter, OQ looks better than MRQII with respect to combat. (However, once a certain level of comfort has been achieved with the combat system, I could imagine becoming interested in introducing additional complexity into it, as MRQII does, so I would not rule out eventually getting on board with MRQII’s combat system.)

The character creation rules in MRQII are wonderful. They seem designed to ensure that any character created is going to have an exciting and rich background. I'm especially impressed by the 'community' and 'background events' rules. They are simple but flavourful -- a winning combination! OQ, on the other hand, has (again) the advantage in terms of simplicity. Creating a new OQ character is more straightforward and thus faster. However, when it comes to creating new characters, I don't mind adding 20-30 minutes to the process in order to come up with a more interesting character. So, with respect to character creation, I think that I prefer MRQII.

Both systems cover the same types of magic (common/battle magic, spirit magic, divine magic, and sorcery). MRQII's account of spirit magic seems much more fleshed out than OQ's account. More generally, MRQII provides more information on magic. The four magic systems appear to be 'modular' in both games, although only MRQII explicitly makes this point (i.e., one could choose to use only some, or one, of the magic systems without affecting the overall ‘balance’ of the game – e.g., a game with only 'sorcery' is perfectly feasible).

I'd be curious to know what people more familiar with both systems think about the relative strengths and weaknesses of the magic systems in MRQII and OQ. It's very hard for me to evaluate them, having played neither game yet.

The bestiary in MRQII is pretty lean (18 creatures). In contrast, OQ provides over twice as many critters (37 in total).

MRQII provides no setting background or adventures. I don't mind the lack of a setting – in fact, I generally prefer it – but it would have been nice if the authors of MRQII had included a brief 'intro' adventure. I find such adventures helpful for GMs new to a system. Even simply reading an intro adventure helps give a starting GM a sense of the way that the system works. OQ, in contrast, provides two adventures (if you purchase the 'Furnace edition'), as well as a campaign setting. The campaign setting in OQ is a little bland, in my opinion, but I don't mind that it's there. And I'm very grateful for the adventures!

Aesthetically, I find MRQII to be the prettier product. The leather cover is simple and attractive, whereas OQ’s cover looks too cluttered and ‘busy.’ The interior art is nice in both books. I like Simon Bray’s black and white pictures inside OQ (as opposed to his cover). Some of the pictures in MRQII look a bit ‘off’ (the heads of the ‘barbarian’ and ‘primitive’ on page 13 look disturbingly large), but for the most part the quality is fine. There are a couple of ‘cheesecake’ pictures in the MRQII book (e.g., pages 102 and 132), but I don’t mind such things, in moderation. The layout of both books is clean and readable.

Overall, the two systems are very similar. This is not surprising, given their common lineage. It should be easy, I think, to take bits from one game to use with the other. For instance, I would be tempted to use the combat system of OQ for MRQII, simply because I find hit locations rather 'fiddly' (although I suppose that they might be something that I could grow to like). Conversely, the ‘community’ rules could be ported from MRQII into OQ without any trouble. (It would also be easy to take bits from BRP to use with either OQ or MRQII.)

In the end, I like both systems a lot, and can’t really say which one I prefer. I would be curious to know if anyone has an ‘all things considered’ preference for OpenQuest or Runequest. And lurking in the background, I suppose, is the question of whether to simply use Basic Roleplaying instead. Since I am judging MRQII and OQ in terms of potential fantasy games, I suppose that the focus of those systems make them easier to use ‘out of the box’ than BRP. Nonetheless, taking the appropriate bits of BRP – or simply using Elric!/Stormbringer – is a definite option (depending on what kind of fantasy game one wanted to run).

Okay, enough rambling, back to procrastinating! 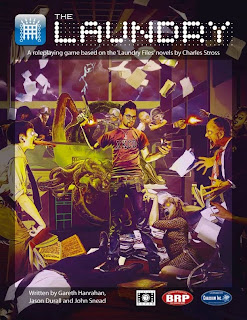 It looks like Cubicle 7 will be producing a role-playing game version of Charlie Stross's 'Laundry' setting, as described in The Atrocity Archives and The Jennifer Morgue.
I very much enjoyed The Atrocity Archives (I haven't read The Jennifer Morgue yet), so I'm rather excited by this development, especially since it will be using (essentially) the same system as Call of Cthulhu ('powered by BRP')! That means that it will be a snap to adapt classic Cthulhu scenarios to the world of the Laundry.
Good times...
More information on the new RPG available here.
(Personal tale: I met Charlie Stross in Maynooth Ireland, a smallish town just outside Dublin, in October 2005. I was a 'guest speaker' at the Irish science fiction & fantasy conference 'Octocon'. Stross, myself, and a few other people were discussing the possibility of persons surviving as pure computer constructs. He struck me as very amiable fellow. Of course, the creator of the 'githyanki' for AD&D deserves a lot of respect!)
Posted by Akrasia No comments: