A thing that went surprisingly well

For once in my life something went more smoothly than I expected it to...

Last Sunday I finally got my Greyhawk campaign going with a couple of old friends. One of the players was in Toronto, the other in Montreal, and I was DMing from Milwaukee. We used 'google hangouts' for the session. The few handouts I used were emailed to them at the appropriate times. We all rolled our own physical dice (rather than use some online dice-roller), etc., and generally relied on the 'theatre of the mind' to follow what was happening.

I was surprised how well it worked. Indeed, I regret having bothered with 'Roll20' years ago (for a short-lived AD&D campaign), which was far more trouble than it was worth. I also regret not trying this much earlier. While I prefer meeting in person (who doesn't?), this was pretty close to that experience.

We all had a great time and plan to continue with regular sessions in the future. However, I suspect that things would not run as smoothly if we were a larger group. Three or four participants probably is optimal for online gaming (at least using a video conference tool).

Anyhow, I hope to write more about this campaign -- and Greyhawk in general -- in the near-ish future.
Posted by Akrasia 12 comments:

Past visions of the future: Germany 1930

I’ve always been fascinated by how people in the past envisioned the future. (Here’s a post from 2015 on how some 19th Century French artists thought life would be like in 2000.)

So I was delighted to stumble upon this article: “Wonderful Futuristic Visions of Germany By Artists In 1930.”

The pictures are all quite delightful, but this one struck me as especially prophetic: 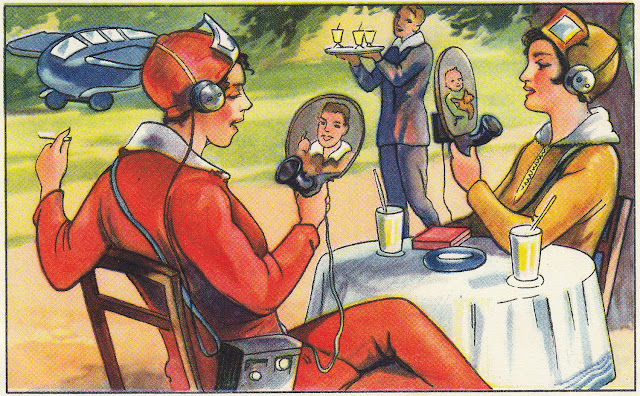 Here is the caption:

Wireless Private Phone and Television.
Everyone now has their own transmitter and receiver and can communicate with friends and relatives. But the television technology has also improved so much that people can speak to each other in real time. Transmitters and receivers are no longer bound to their location, but are always placed in a box of the size of a camera.

These optimistic visions of the future are especially poignant given the hell into which Germany would descend in only a few years.

I thought that I would mention a couple of recent first-person essays on role-playing games in the popular press. Both essays reflect on how playing RPGs helped the authors learn about themselves and develop in important ways.

Recently in Vox: “The best $1.16 I ever spent: a set of loaded Dungeons & Dragons dice” by Jessica Xing.

And in the Washington Post: “How my role-playing game character showed me I could be a woman” by Joan Moriarity.

I found both essays rather interesting. They were written from perspectives radically different from my own. Nonetheless, I can relate to the power of role-playing games in self-discovery and self-development. I know that I would’ve been a very different person—less imaginative, far more shy—had I not opened up the blue ‘Holmes’ Basic Set of Dungeons and Dragons (the one with chits!) many decades ago…