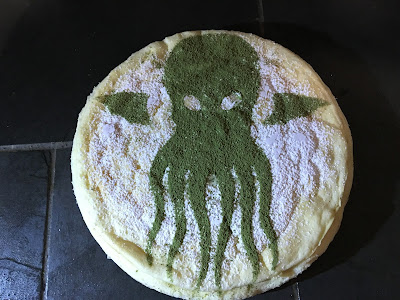 [A lovely cheesecake created by two of my players]

Since it’s Halloween I thought it appropriate to post (finally!) the index for my 7th edition Call of Cthulhu campaign.

The campaign actually has been on hiatus for several months now. I’m not entirely sure when I’ll return to it, as I’m focused more on my Middle-earth campaign right now, and a friend is planning on running the Laundry RPG soon. But since the Cthulhu campaign did go quite well (only one character death!) and was a lot of fun, it would be a pity if I didn’t finish the scenario summaries and post links to everything related to it on this blog.

·       Some initial impressions of the 7th edition of Call of Cthulhu.

Except for the first one (which is a classic that has been around since the beginning of CoC), all of the adventures that I ran for this campaign are new for the 7th edition. After the each summary I provide some general reflections on the adventure.

So I just saw Blade Runner 2049. Here are some immediate reactions (no spoilers!):

·       While not as good as the original, Blade Runner 2049 nonetheless builds interestingly on the original; it does not detract from the power of the original by ‘ruining’ elements of the world (so think ‘Aliens’ not ‘Highlander 2’).

·       It’s visually stunning. In this respect, it is equal to the original (though of course that’s not a fair comparison, given the greater budget and technical power available for the sequel).

·       The world-creation is amazing—just as it was in the original, but the new film expands the world in interesting ways by going places (geographically, intellectually, and visually) that the original did not.

·       The story is compelling. Perhaps there are some holes, but nothing leapt out at me while watching the film.

·       The music is good, but not quite the equal of the original Vangelis score. Towards the end of the film it became slightly distracting.

So overall it’s a great film. See it! As a sequel, though, it doesn’t quite capture the ‘lightning in a bottle’ of the original. But it is a very worthy follow-up. I certainly plan to watch it again soon…