This Blog has not been abandoned

Just in case you were wondering!

But it's been a very draining autumn, and I haven't had the energy to post anything in over a month.  Hopefully things will improve by the end of December...

Indeed, there are a few things that I hope to write about in the (relatively) near future: the original Hawkmoon tetralogy (I reread it a few months ago); some thoughts on a few other novels; my impressions of OpenQuest 2 (the colour hardcopy of which is now in my hands), RuneQuest 6 (hardcover version forthcoming), and Call of Cthulhu 7 (quickstart PDF on my computer, and the full version hopefully coming soon); some further thoughts on the AD&D Forgotten Realms setting; and the final installment of my top-5 ranked FRPG artists. 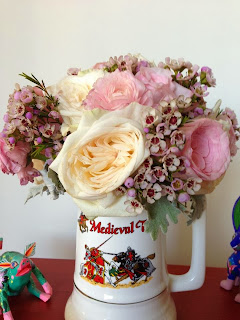 In the meantime, though, here is a picture of the stein I got whilst at Medieval Times last January...
Posted by Akrasia 2 comments: