I was walking along Queen Street East in my neighbourhood this morning when I came upon a television or movie crew working outside of a coffee shop. This is not an uncommon occurrence in Toronto (at least once a month I encounter some filming happening during my various urban ramblings). It was not clear to me, though, whether I should cross the street to avoid them, and so I hesitated.
I was wearing a dark t-shirt that had “I cast magic missile!” emblazoned upon it. The guy in charge (who had been telling people to move things hither and thither) noticed me and said: “You can pass, no worries –- so long as you don’t cast any second-level spells!”
I had a good laugh at that. Nerds: we’re everywhere.
P.S. This is the shirt (but not me modelling it): 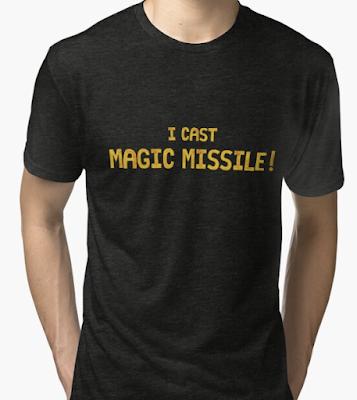