As someone who is both a long-time RPG addict and a philosophy professor, I feel duty-bound to pick up (eventually) the forthcoming anthology Dungeons & Dragons and Philosophy.

My girlfriend has metamorphosed into a kind of polyhedron with many pairs of feelers, membraneous wings, and fanged orifices on stalks. Should I talk to her about this, or keep hoping it’s just a phase? Snapshot enclosed.

I do not know long it was before I dared to inspect your snapshot. Once I did, I immediately fell wholly to the floor. How much time passed after that, do not ask me to guess, but a momentary fragment of memory shows me racing dementedly past a long stone colonnade towards a curious hummock. After that, mercifully, all is blackness. My aunts discovered me beside a nearby megalith, with my faculties paralyzed, a mark on my forehead bespeaking all too vividly the ravages of some snail-like marsupial. It was months before I regained the ability to talk any language but proto-Algonquian. Now my senses have somewhat cleared, I recommend you break things off with your fiancée as tactfully as possible, not letting her suspect you have noticed any change or blemish. Hers is such an image as — but I cannot go on. I have barricaded myself indoors, and hope never to look at another photograph, or touch any variety of leafy vegetable. Even Dalgaard’s worst prophesies fell short of the unspeakable reality! A rank odor now pervades everything, the hills resonate with sustained prehuman howling, and I keep losing my place in the Unrecommended Codex of Naarg,

It is available here, and here is a thread discussing it at the RPG Site.

I’ve mentioned Novus in this blog a couple of times in the past, and I definitely think that it is worth checking out, especially for folks fond of the ‘class + skills’ systems of Ye Olde ICE (though I hasten to add that Novus is a much ‘lighter’ system than Rolemaster, HARP, or even MERP).

The ‘bare bones’  PDF version is only 2 USD — less than a decent cup of espresso!
Posted by Akrasia 1 comment:

Age of Treason Reviews and Blog

Age of Treason: The Iron Simulacrum -- Mongoose's new setting for its Legend FRPG (formerly RuneQuest II) -- looks quite promising, judging by this review from the RPG Pundit (who generally writes informative and helpful reviews, I think, despite being otherwise quite unhinged) and this review at the 'Roll for Initiative' Blog.
It turns out that the author, Jonathan Drake, has a blog for the setting. Here is the description of the book from that blog:

Used with the Legend/RuneQuest II rules, the Age of Treason book provides everything you need to create Adventurers equipped to do their bit for Empire or to slip into the shadows and pursue whatever personal goals their treasonous hearts desire. Choose from dozens of new professions, learn new skills, make pacts with gods and demons and deploy the arts of sorcery in new ways. An extended campaign for beginning level adventurers is included to get you started.
Setting – Hugely detailed and believable world constructed over many years of development and play
Adventurer Creation – Over 50 Adventurer professions for civilised characters
Social Status – a new Characteristic to help define your Adventurer
New Skills – 6 new skills including Brawl and Fast Talk, plus Education – a new Advanced Skill for literate Adventurers
New Cults – 9 new cults including Emperor Worship, as well as guidelines for creating many more, and even for founding a cult of your own.
New Magic – more than 30 new spells as well as new magical skills such as Craft (Enchantment) and Craft (Alchemy)
Advanced Enchanting – create bespoke magic items
Spirit Magic – rules for spirits that can manifest in the material world
Bribery and Corruption – rules to give your Influence skills a boost by greasing palms
Creatures – demonic sorcerer’s assistants, wraiths, golem servants and vampires
Adventures – an episodic campaign in which even the most humble citizen has the chance to prove his mettle in the Emperor’s service.

The map of the 'Taskan Empire' is available here, and looks rather nice.
I had been debating whether to get this book for several months now, but the Age of Treason setting simply sounds too cool not to investigate further. There aren't many 'classical' fantasy settings around, unfortunately, and I am excited to read more about this one!
Posted by Akrasia 2 comments:

OSRCon will be taking place again in Toronto this summer, August 10th and 11th.
The schedule looks very promising so far (and no doubt additional games will be added). The special guest this year is Ken St. Andre, along with last year’s guests Ed Greenwood and James Maliszewski.
Much to my chagrin, I missed last year’s con. I was really hoping to make it this year, but, alas, it looks like that will not be happening. The dates conflict with my friend’s bachelor party. (The friend in question, incidentally, played ‘Adralat Na-Keth’ in last year’s Mong-RuneQuest II Young Kingdoms campaign.)
If you live near Toronto, or don’t mind travelling there for a weekend of old school gaming, I recommend checking out OSRCon.
Posted by Akrasia 7 comments: 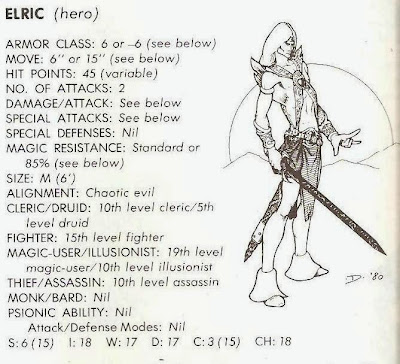 Some of you might remember Jeff Dee’s illustrations for the ‘Melniboneán Mythos’ included in the original printing of the Deities and Demigods book for AD&D. This chapter and the one devoted to the ‘Cthulhu Mythos’ were removed from subsequent printings of the book. (Contrary to what many people have assumed over the years, the decision to remove the Moorcock and Lovecraft based material was made by TSR not in response to complaints from Chaosium. Apparently TSR did not want to give ‘publicity’ to Chaosium’s Stormbringer and Call of Cthulhu games.)
Tragically, the original artwork by Dee for the Deities and Demigods book was lost. However, he is planning on recreating 22 pictures from the Melniboneán Mythos chapter in the near future. Anyone interested in this project, and possibly obtaining some prints or postcards from Dee’s ‘kickstarter’ project, can find more information here.
(Ah, by Arioch, I still dig that picture of the Myyrrhn warrior with the ‘mohawk’ haircut!) 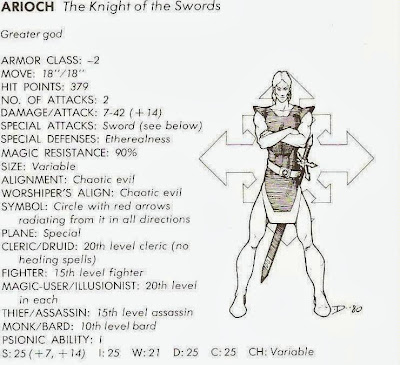 Go here to check out some of the pictures that will be included in the forthcoming RuneQuest 6 core rulebook.
I especially like the Broo, er, 'Chaos Hybrid', and the Hoplite.
Posted by Akrasia 1 comment: