The RuneQuest 6 Special Edition Hardback indiegogo campaign has surpassed its funding goal!  And there is one more week to contribute, if you'd like a copy for the very reasonable price of 50 USD (plus shipping).

If you're curious about RQ6, this "let's read" thread at RPGnet may be helpful.
Posted by Akrasia 4 comments:


News here on a forthcoming setting entitled 'Primeval Thule', which purports to be a world in which 'Conan meets Cthulhu'.  (Of course, the Cthulhu Mythos always were part of the original Conan stories!  But whatever...)

As fellow fans of the fiction of Robert E. Howard no doubt know already, 'Thule' is one of the nations of the 'Thurian Age', the era of REH's 'Kull' stories (set thousands of years before the 'Hyborian Age' of Conan).

The setting purports to be compatible with Call of Cthulhu, which is why it caught my eye.  But given how radically different CoC is from Pathfinder and 4th edition D&D, I have no idea how one could create a setting that would work equally well for each of these systems.

Nonetheless, since Richard Baker claims, "Clark Ashton Smith's Hyperborea stories were perhaps the most direct inspiration for Primeval Thule", I am curious to check out the final product.

Addendum: I can't believe that I forgot to mention that, should this setting prove to be worth using, Crypts and Things would be an ideal (OSR) game to use with it.
Posted by Akrasia 11 comments: 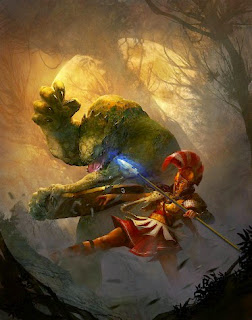 Design Mechanism has launched a crowd sourcing project via Indiegogo in order to produce a hardcover edition of their excellent RuneQuest 6 system.  The campaign is now live, with further info to be found here.  (Also available at the Indigogo site are a couple of links to reviews of RQ6.)

I would like to emphasize the high-quality of the RuneQuest 6 system.  It is, in my judgement, the best fantasy role-playing game to have been produced in the past two decades.  The softcover version of RQ6 is wonderful -- it has an attractive matte cover, and is extremely well laid out.  While the length of RQ6 may seem overwhelming at first, the core system itself is intuitive (it is a BRP-derived game, after all), and the length of the book reflects its completeness (in contrast, say, to its threadbare close cousin Legend).

If you are curious about RQ6, here is a video overview.

To get a hardcover copy of RQ6, one needs to commit $50 (plus shipping, which is $15 in North America, $25 everywhere else).  This is a great deal, as it means that the hardcover version actually is less expensive than the softcover version presently for sale!

Best of luck to Design Mechanism on this endeavour.  I'm looking forward to holding the tome in my trembling hands sometime this autumn...
Posted by Akrasia No comments:


Thanks to estar (I think) for tracking down the very first online mention of the ‘Old School Renaissance’.  Here it is at Dragonsfoot.

It's a bit trippy to see that discussion now, to realize that that was (apparently) the first mention of the ‘OSR’ – a term coined, appropriately enough, by an anonymous ‘guest’.

It also is worth noting that Castles and Crusades was the catalyst for the OSR.  I rarely mention C&C here, and haven’t really thought about the game much since receiving the Castle Zagyg box set almost 5 years ago.  Yet I was once an enthusiastic supporter of the game.  It came along just as I found myself burnt out by 3.5 edition D&D (early 2005, if I recall correctly).

The failure of Castles and Crusades in the eyes of many fans of TSR AD&D and D&D was what prompted the retro-clones.  It led initially to OSRIC, intended at first simply as a tool to enable people to publish 1e AD&D material without fear of legal retribution.  OSRIC was soon followed by other ‘retro-clones’, such as Labyrinth Lord (B/X D&D) and Swords and Wizardry (0e D&D).  Even more retro-clones and quasi-clones came along … And 8 years later, here we are.

C&C is still around, and apparently doing reasonably well, though it never came to be the preeminent OSR game.  (But True20 as an ‘old school game’?!?  What were people drinking back in 2005?).