If you will be spending some time in Providence, and you are a fan of the Cthulhu Mythos, you now can rent Lovecraft's old apartment...

Perhaps it should be advertised on "Cool Airbnb"?
Posted by Akrasia 1 comment:

This song from the excellent Flight of the Conchords is quite entertaining...
Posted by Akrasia 1 comment:

The Dungeons and Dragons film that never was

I was playing Advanced Dungeons and Dragons on almost a daily basis during the early 1980s.  I read every issue of Dragon magazine in those days (which I loyally purchased every month from a hobby shop called ‘Fads’), paying special attention to the writings of Gary Gygax.  So I remember quite vividly Gygax indicating that a ‘major’ Dungeons and Dragons film was in the works.  Ultimately, and – I thought at the time – unfortunately, no such film was produced.

I always wondered what had happened with that promised film, and what its script might have been like.  This recent article at The Escapist sheds some light on the matter.  In particular, it presents an outline of the plot of the film.  Frankly, the story is terrible.  Best that this stinker was never produced!

A Year of Great Gaming Comes to an End 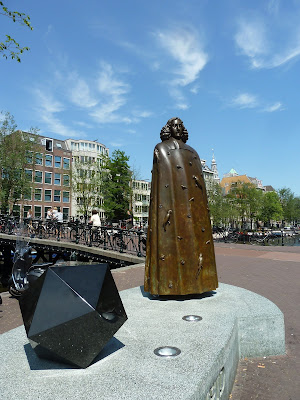 [Spinoza with his huge d20 in Amsterdam]

Here is what I did:

1. I played in roughly 15 (I can’t recall the precise number) sessions of RuneQuest 6 within the Mythic Britain setting (GM: Lawrence Whitaker).  This was one of the finest role-playing experiences I’ve had as a player – surpassed only by the Young Kingdoms (MRQII) campaign which I played in during the spring and summer of 2011.  (The GM for that earlier campaign also was Lawrence.)

2. I played in 3 sessions of RuneQuest 6 using the Luther Arkwright setting (GM: Lawrence Whitaker).  Lawrence ran the sample scenario from the book – which, amusingly, is set in an alternative parallel version of Toronto.  Hopefully I will be able to return for the final session of this adventure sometime this autumn or winter.

3. I ran (‘keepered’?) 7 sessions of Call of Cthulhu 7e, covering 3.5 scenarios.  (My initial impressions of 7e are noted here.)  I hope to return to this campaign, on occasion, in future visits to Toronto.  At the very least, I have to finish up the current adventure, set at the famous (and infamous) Miskatonic University.  (The classic 1920s New England ‘Lovecraft county’ setting was used.)

4. I ran (‘DM-ed’) 2 sessions of Dungeons and Dragons 5e.  (The first two parts of the ‘Mines of Phandelver’ adventure included within the 5th edition ‘Starter Set.’)  I would like to continue this campaign in the future, but I’m not sure if that will be possible.

5. I played in a ‘one shot’ session of Trail of Cthulhu (GM: Chris).  (This was most definitely a one shot, as all of the PCs turned into giant worms at the end!)

6. I played in 2 sessions of … something.  It was a Cthulhu-esque adventure set in the Free Congo State during 1907.  I can’t recall the name of the system, unfortunately, but the adventure was quite compelling (very reminiscent of Joseph Conrad’s Heart of Darkness).  (GM: Chris.)

These were all live tabletop games.  (I also ran a few sessions of AD&D 1st edition online.)  That’s is pretty good, I think, at this stage in my life and career (viz., a middle-aged professor).

I plan to write up an overview of the Call of Cthulhu campaign at some point, as well as some more of my impressions of D&D 5.

In the meantime, alas, back to teaching…