Last year I noted that I was pleasantly surprised by Adventures in Middle-earth—Cubicle 7’s adaptation of the 5th edition Dungeons & Dragons rules to the world of Middle-earth. Simplifying greatly, C7 sliced-out a lot of inappropriate ‘D&D-isms’ (e.g., the magic system, the standard classes) and inserted a number of ideas from their The One Ring game (e.g., rules for journeys, corruption [Shadow], fellowship phases, etc.). The result is a version of 5e that seems reasonably well adapted to Middle-earth (at least in my view).

I recently started a campaign set in Middle-earth with three players. In addition to the setting material provided in C7’s Loremaster’s Guide, I’ve drawn on some of my old ICE Middle-earth Role-playing (‘MERP’) material—a couple of modules and the Mirkwood campaign book—as well as some old White Dwarf MERP adventures by Graham Staplehurst (in particular, “Dawn of the Unlight”), and my own ideas and knowledge of Middle-earth. I have a campaign arc loosely sketched, but I hope to run adventures that also are responsive to the characters’ decisions and goals.

For the most part, I’ll be using my old MERP regional maps in the campaign. While the Cubicle 7 maps are attractive, nothing beats the ones by Peter Fenlon: 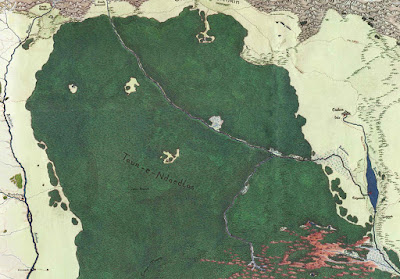 We’ve had three sessions so far, with a fourth planned for this week. Overall I’m pretty happy with how things are going. I’ll post more about it here (soon-ish).

A nice tribute to the art of David Trampier

I’ve mentioned my longstanding adoration for the art of David A. Trampier (‘DAT’) in this blog a few times. One early post features the iconic ‘Emirikol the Chaotic’ picture from the original Dungeon Master's Guide. And when I ranked my top-5 favourite FRPG artists, Trampier was ranked #1.

I mention this because there is a nice piece on DAT’s work at Tor.com by Saladin Ahmed. If you too are a fan of Trampier’s unique style, check it out. (Apparently the piece was first posted in 2011 and was reposted today.) 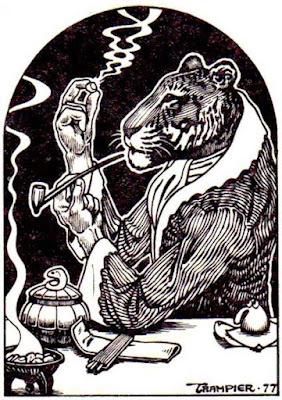 The Design Mechanism—publisher of the excellent Mythras roleplaying game (formerly RuneQuest 6)—has a smashing new website and forum.

I'm pleased to see that their ‘Mythic Earth’ line is chugging along nicely, with Mythic Constantinople scheduled to come out in the autumn.

Last summer, while visiting my parents, I uncovered some old fantasy pictures that I had composed while a young lad (ages 11-15). These were inspired primarily by my Advanced Dungeons & Dragons activities during those halcyon years.

My favourite is the ‘Dragon Slayers’ picture (which I posted almost a year ago). And here are a couple of (far less cool) paladins.

Inspired by last night’s epic episode of Game of Thrones, I thought that I would post this picture of a black dragon today: 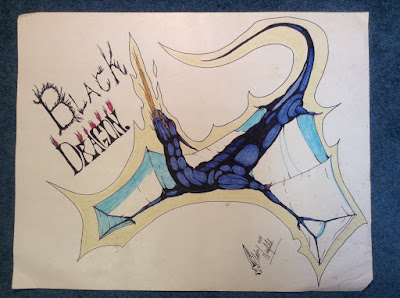 As you can see from the signature, this was composed in 1984. I'm not sure why I never finished colouring the wings...