A Lyonesse FRPG is coming! 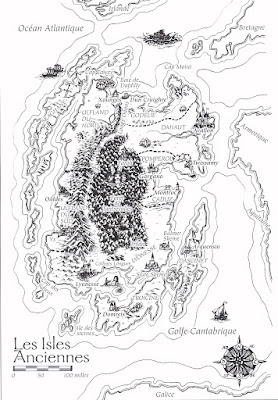 Exciting news from the good people at the Design Mechanism: they will be producing a freestanding RPG (using the Mythras rules) based on Jack Vance’s classic Lyonesse trilogy!

Here is the announcement:


Jack Vance’s high fantasy masterpiece, Lyonesse, is to be brought to life in a new roleplaying game by The Design Mechanism. Licensed and approved by Spatterlight Press, Lyonesse is a standalone game based on the acclaimed Mythras system.

The Lyonesse trilogy – Suldrun’s Garden, The Green Pearl, and Madouc – tells the story of the Elder Isles, and the ambitions of King Casmir of Lyonesse to bring its fractious kingdoms under his sole rule. Lyonesse is a setting of high chivalry and low cunning. Noble knights rub shoulders with self-serving tricksters, while capricious fairies and child-eating ogres haunt the dense expanse of the Forest of Tantrevalles. Itinerant magicians peddle charms and potions at the Goblin Fair, while kings hoard magical treasures such as the prophetic mirror Persilian. Great armies clash in fierce battles, while the navies of Lyonesse and Troicinet seek to outwit each other on the coastal seas. The new religion of Christianity coexists with the older gods of Hybras, such as Lug of the Sun, Matrona the Moon, Sheah the Graceful, and innumerable parochial half-gods.

Using The Design Mechanism’s Mythras mechanics, the Lyonesse roleplaying game is presented as a standalone game with all the rules necessary for play. The book will provide a detailed overview of the Elder Isles and its history, its kingdoms and politics, and, of course, its movers and shakers, from King Casmir to the arch mage Murgen; from Shimrod to his nemesis Faude Carfilhiot; from villains such as Visbhume and Torqual, to heroes like Aillas, Dhrun and Madouc.

More information can be found in this PDF.

I’m thrilled by this unexpected development. Vance’s trilogy is one of my all-time favourites. And, of course, Mythras is a brilliant system. Two of my favourite things mixed into one package!

Over at the Goodman Games site is a short essay on J.R.R. Tolkien. It covers the usual information on the good professor, and comments on the influence of Middle-earth on Dungeons & Dragons. The author (Chris Doyle) is somewhat sceptical of Gary Gygax’s attempts to minimize Tolkien’s influence on the game—and correctly so, in my view.

Anyhow, I learned these two facts about Tolkien from the essay:


“As a child he is said to have been bitten by a large baboon spider, which could have been an influence of his later writings of Shelob in The Lord of the Rings. As the Second World War raged on, Tolkien was tapped by the British government to become a codebreaker. He agreed, and received formal training from the cryptographic department and even took classes at the London headquarters of the Government Code and Cypher School. Later that year he was informed his services would not be required.”

Also, my wife sent me a link to this 'brackify' of the Elves of Middle-earth. I can't make any sense of it. (More specifically, the various 'pairings' generally seem incoherent.)