Magicians and the Colours of Magic 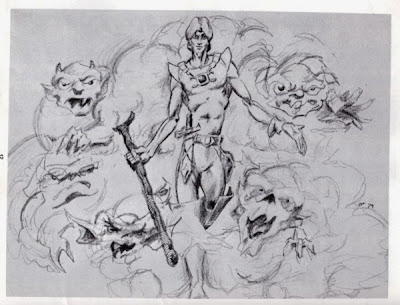 These rules are meant to modify the Swords and Wizardry magic rules [or the rules of 0e D&D, Basic/Expert D&D, Labyrinth Lord, Basic Fantasy RPG, or – with a little work – 1e AD&D or OSRIC] so that they more closely resemble the way that magic works in most classic ‘swords and sorcery’ tales.  Specifically, they introduce the idea of the ‘colours of magic’ – magic spells are classified as ‘white,’ ‘grey,’ or ‘black’ in nature.  A new system of casting spells is also outlined, as well as a new class, the ‘magician,’ that replaces both the standard cleric and magic-user classes.

The magic-user and cleric classes are replaced with the magician class.  Magicians may be benevolent witches, reclusive shamans, eccentric sages, enigmatic priests, malevolent necromancers, or megalomaniacal sorcerers – their exact nature depends on their background, goals, spells, and sanity.

Magicians of any focus who are associated with a cult or religious order might be called priests, seers, or acolytes.

Magicians use the ‘magic-user’ experience chart, spell chart (ignoring spells above level 6), and saving throws.  Like magic-users, they typically eschew armour, although they may wear leather armour without interfering with their spell casting, and are not trained in the use of shields.

Magicians may use any weapon, although they receive a -1 to all damage rolls (but always do a minimum of ‘1’ point of damage), unless they are using daggers, darts, quarterstaffs, or slings.  (If using the ‘Class-Based Damage’ system that I presented in Knockspell #1, magicians use the ‘cleric’ damage table, and do not suffer any penalty to their damage rolls.)  Since magicians normally need at least one hand free in order to cast their spells, they rarely will use two-handed weapons (except for quarterstaffs, which are easily held in one hand when necessary).

Magicians use a d6 (no modifier) as their hit die.  (Thus, using the damage rules outlined above, first level magicians start with 11 hit points, prior to any constitution modifiers.)  They receive one hit point per level after level nine.

Magicians can prepare a number of spells as determined by their level (see the magic-user spell chart; as noted earlier, magicians with an Intelligence score of 15 or greater may prepare an additional first-level spell).  A magician may change the spells that he/she has prepared with eight uninterrupted hours of study (the magician’s spellbook must be available).

Magicians may cast any spell that they have prepared any number of times – however, as explained below, they suffer exhaustion (loss of hit points) every time that they cast a spell, which limits how many spells they can cast before resting.

Magicians can write their own scrolls, copying the spells from their spellbooks, at the cost of 200 gold pieces per spell level for supplies (special ink and parchment).  It takes one full day per spell level of careful work to copy a scroll (one has to be very careful when dealing with the mystical powers!).  Thus writing a scroll of a fourth-level spell would cost 800 gold pieces and take four full days of work.  Spells cast from scrolls, whether prepared by the magician or found, cause exhaustion – and, if the spell is classified as ‘black magic,’ corruption – just as if the magician had cast the spell normally.  Scrolls increase the range of spells available to a magician; they do not reduce the physical costs of casting spells.  (Exhaustion and corruption are explained below.)

There is no division between ‘clerical’ and ‘magic-user’ spells – all spells can be learned by magicians in the same way that magic-users do (i.e., by recording them in spellbooks, and ‘preparing’ them to be cast later).  If a spell has both a ‘cleric’ and a ‘magic-user’ version, use the ‘magic-user’ version.

No spells above level 6 exist, although powerful but costly ‘rituals’ may be created by the Game Master in order to simulate the powers of higher-level spells – including especially the summoning of vile demons!

There is no ‘read magic’ spell.  Instead, all magicians know the ancient eldritch language in which all magic is written.

In addition to all 7th-9th level spells (except for ‘Restoration,’ which I have made a 6th level spell), I have removed the spells ‘raise dead’ and ‘reincarnation,’ as they seem inappropriate for a ‘swords and sorcery’ flavoured magic system.

The ‘Extension’ spells (I-III) do not belong to a particular colour (white/grey/black).  Rather, they belong to the same colour as the spell they are used to ‘extend.’  So using Extension I to extend the duration of a ‘fly’ spell means that the magician in question has cast two ‘grey magic’ spells (and thus would suffer 12 points of exhaustion damage, as explained below).

Spells in square brackets are taken from Matt Finch’s ‘Eldritch Weirdness: Book One.’

When magicians cast ‘white magic’ spells they suffer exhaustion damage equal to one hit point plus one hit point per level of the spell cast (so a magician who casts a third level white magic spell would suffer four points of damage).

When magicians cast ‘grey magic’ spells they suffer exhaustion damage equal to twice the level of the spell cast (so a magician who casts a third level grey magic spell would suffer six points of damage).

When magicians cast ‘black magic’ spells they suffer exhaustion damage identical to that caused by ‘grey magic’ spells (twice the spell level).  In addition, magicians casting ‘black magic’ spells must make a saving throw (versus ‘spells’ if using a system other than S&W) in order to avoid corruption.  If this saving roll is failed, the magician is corrupted slightly and suffers a loss of temporary Wisdom points equal to the spell level (e.g., 3 points of temporary Wisdom for a third-level spell).  Temporarily lost points of Wisdom can be recovered at a rate of one point per complete day of rest and meditation (no other action possible).  The spell ‘Restoration’ will restore instantly all temporarily lost Wisdom points.

Furthermore, if a magician casting a ‘black magic’ spell fails his/her saving throw by rolling a ‘1,’ then that magician loses one point of Wisdom permanently (so if a magician fails his/her saving throw casting a third-level black magic spell by rolling a ‘1,’ he/she would lose one permanent point of Wisdom and two temporary points of Wisdom).  The spell ‘Restoration’ will not restore any permanently lost Wisdom points.

A magician whose permanent wisdom score is lowered to 2 becomes insane, and possibly the thrall of an extra-planar demonic force.  He/she henceforth is a non-player character!

1. These house rules are meant to be used with my other house rules, and in particular my rules for sanity and damage (both already posted on this blog).

2.  A version of these house rules will appear in a longer article on ‘swords and sorcery’ campaigns in issue 3 of Knockspell magazine.
Posted by Akrasia