Prometheus at the Mountains of Madness 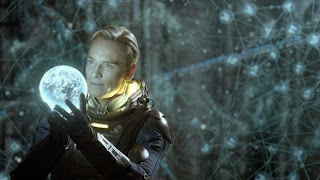 So I saw 'Prometheus' Friday night…

It's visually stunning. And, for the first time ever, I found the 3D not only non-annoying, but actually a positive feature of the film.  It's worth seeing for the 'eye candy' alone.

Story-wise, the first half was enjoyable enough, but during the second half it becomes increasingly clear that the background premises of the film don't cohere very well, or even make sense on their own.

Moreover, events seem to start happening simply for their 'shock' value. And the quasi-theological musings of Guy Pierce and others are rather silly.  ‘Prometheus’ tries to ask ‘big questions’ but fails to do so in an intelligent and compelling way.

The acting in 'Prometheus' generally is quite good, especially Michael Fassbender.  (Certainly his portrayal of an android is in the same league as those of Ian Holm and Lance Hendriksen – no small achievement!)

Essentially, the film is a rip-off of Lovecraft's classic tale, At the Mountains of Madness. But it lacks the coherence and, ironically, the vivid 'alienness' of Lovecraft's novel.

I wish someone someday simply would make a first-rate film version of the original Lovecraft story – instead of derivatives like 'Prometheus' or the (far superior) 1980 version of 'The Thing'.