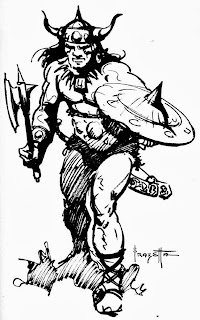 The protagonists of classic ‘swords and sorcery’ tales are a remarkable lot.  They are a ‘cut above’ the common stock of humanity, physically and mentally superior to most people, although perhaps sometimes less prudent.  Even this occasional lack of prudence, however, is compensated with superior luck and drive.  Characters such as Conan, Kull, Fafhrd, and the Gray Mouser are capable of overcoming foes and surviving challenges that would easily defeat most common men.  Classic ‘swords and sorcery’ tales focus on highly exceptional and powerful individuals, not the ‘little guys’ of the world.  Even as neophytes, most ‘swords and sorcery’ characters are exceptionally tough and capable.

To reflect this aspect of the ‘swords and sorcery’ genre, it is recommended that first-level player characters start with the maximum number of hit points possible for their class, plus five additional hit points (modified by their constitution scores, as appropriate).  Hit points should be rolled normally after first level.

Player characters’ hit points represent only ‘superficial’ damage (i.e., exhaustion, light bruises, minor scrapes, and so forth.).  Because of this, all lost hit points may be recovered by sleeping without interruption for eight full hours.  Resting (not sleeping), or sleeping for less than eight hours, will enable a player character to recover one hit point per full hour of rest or sleep.

Cure Wounds spells and potions of Healing do not heal hit points, but only lost points of Constitution (as explained below).  However, a draught of ‘strong drink’ (ale, wine, liquor) can ‘invigorate’ a character, enabling him/her to recover immediately 1d4 hit points.  Game Masters may also want to allow alchemists to sell ‘Elixirs of Invigoration’ for 200 to 300 gold pieces.  Drinking such an elixir might enable a player character to recover instantly 1d6 + 2 hit points.  Only one such draught, whether of strong drink or an elixir, will have this effect per day.

(Note: This house rule will appear as part of a longer article on 'swords & sorcery' adventures in Knockspell #3.)