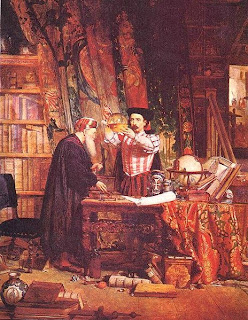 Player characters weren’t always adventurers.  Before they decided to head off into dark mysterious dungeons or ogre-infested wild lands, they most likely started down one or more ‘respectable’ career paths.  In most ‘old school’ fantasy role-playing games like Swords & Wizardry and Labyrinth Lord, however, this aspect of a character’s early life has no effect on that character’s abilities.  This optional rule aims to rectify this situation.

In addition, by providing all characters with at least one ‘background profession,’ this optional rule should provide greater depth and personality to the players’ characters.  Consider, for instance, the following party.  Cormac the fighter was once a hunter who was raised near the Highland Forest, hence his skill in tracking prey and moving stealthily in hill and wood.  In contrast, his ally Elowyn, also a fighter, was once a scholar in the city of Bookbridge, hence her wide-ranging knowledge of different esoteric subjects.  Elowyn’s sage-like lore intimidates her companion, the magic-user Alaric, whose own background as a petty noble in the court of the Duke of Briz means that he knows much of current politics and fashion, but little of ancient eldritch secrets, despite his arcane training.  Finally, their holy ally – the rotund Fredigar, priest of Muirgen, Mistress of the Sea – spent years as a merchant and sailor before being called to service by his goddess.

It is assumed that characters abandoned their professions in order to become adventurers before progressing beyond the ‘apprentice’ stage (or equivalent).  Thus a character who has the background profession of ‘alchemist,’ for example, would not be as skilled at alchemy as most ‘professional’ (non player character) alchemists. 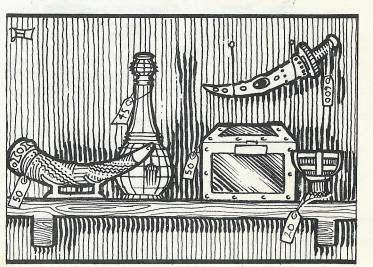 Players may select (or roll for) either one profession on chart I or two professions on chart II.

3 Doctor [Requires Intelligence and Wisdom of 10+] 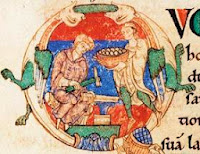 Alchemist [Requires an Intelligence of 12+]

Alchemists are skilled at identifying elixirs, poisons, potions, and so forth.  (Normally there is no bonus to the roll, except for +1 if Intelligence is 13 or greater, but only alchemists can try this.  If an alchemy lab is available – typically only found in towns with populations of 2500 or more – the alchemist gains a +4 bonus, but must pay 30 +2d10 gold pieces per day to rent necessary supplies.)  Characters with the alchemist background profession start with 1+1d3 potions (to be determined randomly or by the GM).

Aristocrats have knowledge of court etiquette, heraldry, recent history, and politics.  They are skilled at difficult riding manoeuvres (+4 bonus) and mounted combat (+1 bonus to hit when on a trained warhorse).  Characters of an aristocratic background start the game with an inherited high-quality weapon, shield, or suit of armour (player’s choice).  Because of its superior quality, this item will have a +1 non-magical bonus (i.e., the weapon will have a +1 bonus to hit but not damage, or the shield or armour will grant a +1 bonus to AC).    Aristocratic characters also start with a bonus of 2d20 gold pieces.

Blacksmith [Requires a Strength of 10+]

Doctor [Requires an Intelligence and Wisdom of 10+]

Doctors can bandage wounded characters with proper equipment.  A doctor can heal 1-2 hit points after one turn of applying a bandage or a salve.  Alternatively, a doctor can treat an unconscious character, returning that character to consciousness after applying a bandage or salve and using smelling salts for one turn.  Doctors can heal a character in this way only once per combat.  (A ‘medical kit’ with 10 bandages, 5 salves, and smelling salts, costs 15 gold pieces; characters with the doctor background profession start with one free kit.)  Doctors can also try to draw out poisons (+4 bonus) and treat many natural diseases (+4 bonus).

Characters who were once farmers are skilled at predicting weather (+4 bonus) and at bartering (+4 bonus).

If near a body of water and properly supplied (with a net, etc.), former fishers can capture enough fish to feed a 3+1d4 people for a day.  Fishers are also skilled at swimming (+4 bonus).

Characters who were once fletchers/bowyers can make 1d4+1 scores (i.e., 40-100) of arrows or bolts per day with proper equipment (costs 10% of normal price).  Such characters also are skilled at repairing damaged arrows and bows (+4 bonus).  Fletchers/bowyers can determine the correct value of non-magical bows within 10%.

Frontiersman  [Requires a Constitution of 9+]

Gambler [Requires an Intelligence of 9+]

Characters who once made their living by gambling obviously are skilled at such games (+4 bonus).  They may earn (or lose!) 1d100 – 20 silver pieces (-19 to 80 silver pieces) per week by playing such games in any decent-sized town (normally a population of 2000 or greater), but may not adventure during that period.  (Note that there is a possibility that a gambler may lose silver pieces during a period of gambling thanks to an unlucky streak.)

Characters who were once hunters have good knowledge of regional wildlife (+4 bonus if roll is required).  They are skilled at tracking creatures (any land-based animal, humanoid, or monster) in the wilds (+4 bonus), and are good at hiding and moving silently in the outdoors (+4 bonus).

Characters who were once leatherworkers can repair any leather good, including leather armour, with proper supplies (costs 10% of normal price; normally takes half a day per good).  Leatherworkers can also determine the correct value of non-magical leather goods and hides within 10%.

Locksmiths are skilled at repairing and disabling most mechanical devices, such as locks, mechanical traps, etc. (+4 bonus).

Merchants are knowledgeable of the regional economy and current politics, and are good at bartering (+4 bonus if roll required).  Characters with the merchant background profession start the game with extra ‘supplies’ (player’s choice of kind of goods) worth (2+1d4) x 20 (i.e., 60-120) gold pieces.

Minstrel [Requires a Charisma of 12+]

Characters who were once minstrels are knowledgeable of regional culture, court etiquette, and current politics.  They know how to play one instrument (player’s choice), and own that instrument (decent quality – worth 20+2d20 gold pieces).  Minstrels can earn 2d12 silver pieces per week from performing (the character cannot adventure during this time) in any decent-sized town (population 1000+).  Minstrels can only earn 1d12 silver pieces per week in smaller locales.

Characters who devoted their pre-adventuring years to study are knowledgeable of a wide range of topics, including culture, geography, history, religion, etc. (+4 bonus if roll is required).  Scholars also are knowledgeable of certain legends, including those concerning powerful monsters, ancient heroes and villains, powerful relics and magic items, etc. (+4 bonus).  Scholars can try to identify a magic item (no bonus to roll, except for +1 if Intelligence is 13 or greater, but only scholars can try this) if appropriate libraries and/or colleges are available (typically requires a town with a population of 5000 or greater, takes one week of research per item, and costs 50+1d20 gold pieces).

Characters who were once sentinels or guards are trained to be observant (+4 bonus to rolls to notice unusual things).

As noted in the various descriptions of the background professions above, characters may receive a bonus (typically +4 on a d20) when attempting certain tasks associated with their background profession.  This system uses characters’ saving throws as a general task resolution mechanic (a house rule that I presented earlier).   Below is a summary of that system.

Roughly, under this system, when attempting a particular task, the player rolls 1d20, applies any relevant attribute modifiers (a bonus of +1 or a penalty of -1, depending on the attribute score), and any general modifiers that the GM judges appropriate (typically ranging from -10 to +10).  If the modified roll equals or exceeds the character’s saving throw number, the task is successful.  Using this system, any bonus derived from a character’s background profession (typically +4) is applied to the character’s saving throw roll.

For example, a character with an Intelligence score of 14 and the ‘scholar’ background profession attempting to remember the history of a nearby ruined temple would roll 1d20, add her intelligence bonus (+1), and add +4 because of her background profession.  (For this example we will assume that there are no difficulty modifiers.)  If her roll +5 equals or exceeds her saving throw number she successfully remembers the history of the ruined temple. 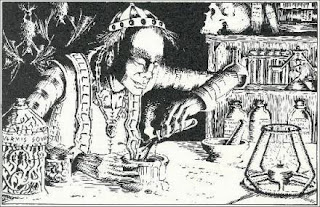 A slightly different version of this house rule appeared as an article in Fight On! #5.

One difference between this version and the Fight On! article is that in the published version alternative ways of using the background professions are outlined (i.e., systems that do not use the Swords & Wizardry saving throw system as a ‘general task resolution mechanic,’ e.g., a d6 system).

Brigand [Requires a Strength of 9+ and a Dexterity of 9+]

Characters who once spent time as brigands are skilled at hiding, moving silently, and ambushing opponents (+4 bonus).

Burglar  [Requires a Dexterity of 12+]

Characters who once spent time as burglars are skilled at hiding and moving silently (+4 bonus), and at opening locks, finding traps, and disarming traps (+4 bonus).  Characters with the burglar background profession start the game with a set of good lockpicks (+1 on d20, or +5%, non-magical bonus).