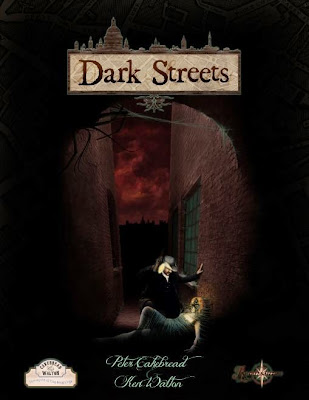 Speaking of Cthulhu-related gaming stuff, I wanted to mention that my favourite RPG book of 2013 so far is (hands down) Dark Streets from Cakebread and Walton.

Dark Streets is a setting supplement for the Renaissance RPG (which is based upon OpenQuest, adapted for ‘black powder’ era settings).  However, Dark Streets should be easy to use with Call of Cthulhu (Renaissance  and CoC share the same d100/BRP ‘DNA’, after all), and most other d100-based systems.

The setting itself is London in 1749 -- a dynamic, rapidly growing city, but also a den of iniquity and crime.  The historical information is well presented and (thankfully) not too overwhelming.  There is just the right amount of information for non-historian Game Masters to run adventures in this setting with aplomb.

The players’ characters are members of the Bow Street Runners, London’s first police force, run by chief magistrate Henry Fielding (with help from his blind brother, John Fielding, who occasionally receives ‘visions’ in his dreams that help him anticipate highly unusual crimes).  The premise of the setting is that, in addition to all the prosaic crime to which Londoners are victim, there are darker, eldritch things going on as well -- things that threaten the very future of humanity.  (I guess there is no need to be coy here: I refer, of course, to assorted ‘Cthulhu Mythos’ creatures and associated human cultists, all of which are up to no good.)

One way to think about Dark Streets is that it is, very roughly, the Laundry (or perhaps Delta Green) set in the mid-18th Century.  The PCs work for a government authority (with hopelessly inadequate resources, of course!), investigating things about which the public must not know, but from which they must be protected at all costs.

In short, I strongly recommend Dark Streets to anyone interested in running a Cthulhu Mythos game in a great, flavourful setting that is a little different from the standard 1920s one.

(The RPG Pundit also likes it.) 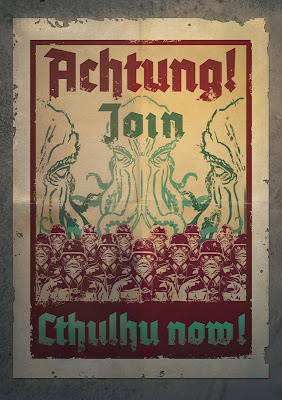 I have more Call of Cthulhu stuff than I can possibly use in this lifetime already, and I'm generally leery of Kickstarters, but this one looks too damn cool to pass over... 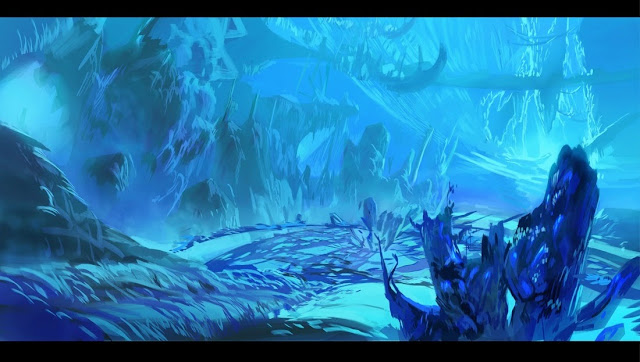 Fight On! to End


Either issue #14 or #15 will be the final issue of the epic OSR fanzine Fight On!  The full statement from Calithena can be read here.

I’m quite sad to see Fight On! wrapping up.  It was a real force in the OSR, especially in the early years, and every issue contained lots of interesting articles and adventures.

I’m proud to have had a couple of things published in Fight On!  And I regret that I didn’t submit more articles. 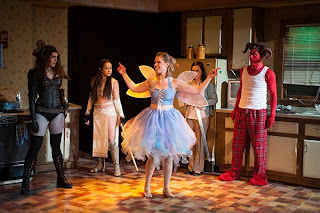 I saw the play “She Kills Monsters” with my significant other last night at the Steppenwolf Garage Rep in Chicago (just a 20-minute walk from my place).

It was a great, surprisingly intense, experience.  Although I (of course) enjoyed all the D&D references (even though the play grossly misrepresents how the game actually works), the play is about much more, and should appeal to people who know nothing about the game.   Many of the scenes were quite physical -- mock sword fights, dramatic leaps, etc. -- which were especially thrilling given the small size of the theater.  The play also was emotionally intense: at least once during its course I had to dry a few tears.  Finally, all the 1995 pop-culture references were fun, though they made me feel rather old (is ‘Quantum Leap’ no longer on?).

The play already has had a NYC run (at the Flea) and will be appearing in Boston soon.  Check it out!  (A review.)

According to Mythmere, the real meaty discussions concerning Swords and Wizardry are no longer taking place at the S&W discussion boards but rather at the S&W Google+ page.

More generally, it seems that while I wasn't paying attention (i.e., the past 12+ months), a lot of RPG-related discussion (at least amongst OSR-types) has moved to Google+ and away from fora and blogs.

By Crom’s drooping mustache, why has this happened?

I'm not terribly familiar with Google+, as I find it even more annoying than facebook (something I did not think was possible). As far as I can tell, Google+ does not facilitate discussion any better than traditional discussion boards do; indeed, if anything, I find it much harder to find relevant discussions (threads) on Google+ pages.

So what is the appeal of Google+? Is it just new and shiny? What am I missing?

I recently started re-reading the 1st edition AD&D Players Handbook (mainly as a PDF on my iPad mini whilst on the bus, so I haven’t gotten very far yet).  Like everything else written by Gary Gygax during his time at TSR, I find the text quite enjoyable, and am discovering minor things that I never noticed before (or perhaps have long forgotten).  More generally, I now appreciate that Gygax’s idiosyncratic writing style actually was part of AD&D’s appeal 30+ years ago, not a barrier to it.

By chance, I stumbled upon this post by Trent Foster from 2009 that makes essentially this point (though far better than I could):

The secret of AD&D's marketing success in its peak years (early 80s) was based on a sort of paradox, or even a lie -- the game was aimed at, and written for, adults, even though the core audience was actually kids aged about 10-14. These kids were the ones buying the books and playing the game (and even submitting stuff to Dragon and TSR -- there's tons of examples out there of people sheepishly admitting that a letter or article they wrote for Dragon magazine with a studied "adult professional" tone was really written when they were 14 or whatever) but they all thought they were doing something adult -- something above their expected level of intelligence and sophistication, something vaguely dangerous and forbidden. Hell, this dynamic existed within the very Gygax household -- two of the primary playtesters of his "adult" game were his teenage sons -- Ernie in the 70s, Luke in the 80s (and, for that matter, Alex in the 00s).

A big part of the appeal of AD&D for us 80s kids was the difficulty of understanding it -- that you had to be smarter than average to understand it and, once you did, you earned social cachet by explaining it to the other kids (who didn't have their own copies because they couldn't afford them or their parents wouldn't let them, or who had the rulebooks but couldn't make any sense out of them because they didn't understand the Latinate abbreviations and words like "milieu" and "antithesis of weal"). Likewise with the illicit artwork with violence and nudity and pictures of demons and sacrificial altars and stuff -- and the media-panic surrounding it. Sure anybody who had read the books and played the game knew the accusations were all total crap, but it definitely made the game seem "cooler" (and yes, hard as it is to believe nowadays, there was a time -- when I was in 4th-6th grade, so 1984-86 -- when D&D (or, rather, AD&D -- the D&D boxed sets by Moldvay and later Mentzer were the dirty little secret, the way those of us who understood the game had by and large actually learned it, but we'd never admit that openly because that was "kiddie stuff" whereas AD&D was the Real Thing -- just like we'd sure as hell never admit to watching the D&D cartoon or playing with D&D action figures, even though most of us did) was considered cool, where the kid with the biggest collection of stuff and best understanding of the rules (usually because he had an older brother who he'd learned it from, or because he secretly had one of the Basic Sets (see above)) had an "instant in" with the popular (note: middle-school popular, which is different from high-school popular when cars and drugs and sex are involved) crowd).

When TSR started changing the game around -- making it more kid-friendly by simplifying the language and sanitizing the content, actually marketing it towards the age of people who were playing it rather than the age of people those playing it looked up to and wanted to be like -- the appeal was lost, and D&D went from being the cool, dangerous thing that the smart and sophisticated kids played to being the boring thing that nerdy kids play, which is how it's been known ever since. By making D&D into something safe and accessible that anyone could understand and play, it became something nobody wanted to play.

My only quibble with this post is that, despite being a few years older than Foster, I don’t recall AD&D ever being especially ‘cool’, even during ‘middle-school’ (though it did seem not especially nerdy in the early-mid 1980s).

I was oblivious to the 'Read an RPG Book in Public Week' until a friend posted about it elsewhere.  The current week is almost over (ends March 9), but there are two more: July 21 - 27, and September 29 - October 5.

Generally, I've had no problem reading RPG books in public (e.g., in coffee shops, on the train, etc.).  My Call of Cthulhu books warn others to leave me alone!

But I tend not to read 'paper' RPG books in public, as most of them are awkward and thick -- and, in my case, often decades old.  I wouldn't want to get any of my classic 1e AD&D modules (even more) bent and stained!  (Hence my iPad mini, which I received as a gift last Christmas, has proven to be a great boon for my RPG-reading habits.  I've loaded it up with lots of great RPG PDFs.)

But, heck, I'll bring some Cthulhu and RuneQuest tomes with me to the coffee shop this weekend. And I'll wear my black 1e AD&D Dungeon Masters Guide T-Shirt as well!
Posted by Akrasia 3 comments: 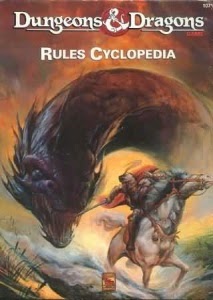 Over at the RPGsite the following question recently was asked: "If you had to rewrite one TSR-era D&D book, which one would it be, and how would you change it?"

Here is my answer:

Rules Cyclopedia:1. Let PCs be druids, paladins, or avengers from level 1. Let knights be a 'prestige class' for fighters of any alignment at level 9. Add illusionists.2. Fix thieves. Seriously, they are a horrible class in the RC. (Perhaps treat thief skills like the other 'optional' skills, and let any character class pick them? Or let thieves assign skill points and receive Dex bonuses, as in 2e AD&D?)3. Downplay the higher-level stuff. Make it clear that levels 1-12 are the focus of most campaigns, and that higher-level characters (NPCs and PCs) are extremely rare. (No council of 1000 36th level archmages running Alphatia! Ugh!)4. Eliminate 'attack ranks' for demi-humans (elfs, dwarfs, halflings). Fix the 'optional' 36-level progression charts for those classes, and just make those official.5. Keep 'race classes', but include multiple versions (dwarf clerics, dwarf thieves, elf druids, etc.). (Essentially, expand upon what was done in some of the Gazetteers.)6. Ascending ACs.7. Change all the art. Hell, just recycle the art from the Moldvay/Cook B/X books (especially the Otus stuff).I'm sure I'm forgetting lots of other fixes...

I'm not sure how well the rules for running dominions work, so perhaps those need some fixing as well.

Since I've been reading OSRIC (the 1e AD&D clone) lately on my ipad mini (helps make sitting on a bus more tolerable), I also have some thoughts on how to 'fix' AD&D.  I'll try to post those in the relatively near future...
Posted by Akrasia 11 comments: