By Crom! This is brilliant: artist Kris Friesen has inserted Conan (the Cimmerian with mighty thews) into a number of murals throughout western Canada (especially Edmonton). 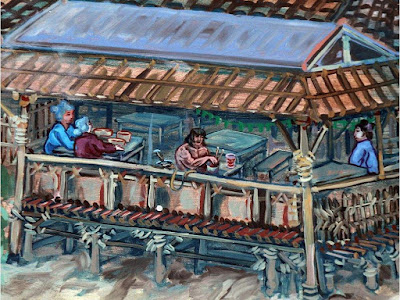 And here is Conan—perhaps repenting for his previous praise for hearing the ‘lamentations of the women’—marching in a women’s rights march: 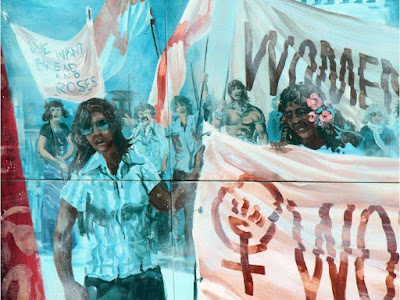 Finally, here he is being splashed in a pool: 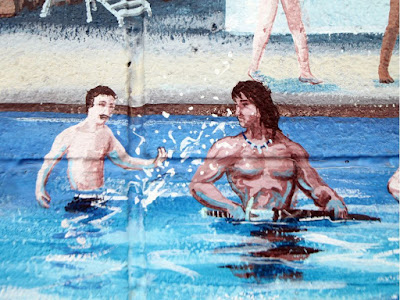 I suspect that that mustachioed hipster will soon regret his action…

There is a decent article at PC Gamer on the 20th anniversary of the classic computer role-playing game (CPRG) Baldur’s Gate (BG).

I must confess that BG—and the other ‘Infinity Engine’ (IE) AD&D-based CRPGs, including Baldur’s Gate II (BG2), Icewind Dale (IWD), and Planescape: Torment (PST)—have given me a surprising amount of joy since 2000 (when I first played BG). This is despite the fact that these games almost derailed the completion of my PhD 2000-2002. 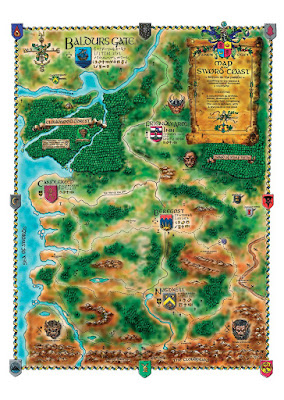 [A map of the region covered by the original Baldur's Gate game.]

I’m not a fan of CRPGs or video games in general. I’ve never played any massive multi-player online role-playing games (MMORPGs), like the World of Warcraft. With respect to computer games, I played far too much Civilization during the 1990s. However, I only dabbled with Diablo during that decade, and simply couldn’t get into it. The same applies to most other CRPGs that I’ve tried over the years. But—aside from Neverwinter Nights (NWN)—BG, BG2, PST, and IWD are the exceptions.
(I like Neverwinter Nights, and I’m glad that there is now an ‘Enhanced Edition’ version that I can play on my Mac. I especially appreciate the wide range of fan-produced modules for NWN, some of which are superior to the original, rather lacklustre campaign. But I never found NWN as engaging as the IE games. One reason is that I find it far less visually impressive, despite being ‘3-D’ [I’ve never understood the appeal of 3-D in anything: movies, games, etc.]. Another reason is that NWN employs the 3rd edition D&D rules, which I like less than AD&D. But enough of NWN…)

There are a few reasons why I find the classic IE games like Baldur’s Gate to be special. One reason is aesthetic. The music is magnificent. And visually, I find these games beautiful to look at. The screenshots below (with the ‘game information sections’ cropped out) don’t really do justice to how great the games look on a large computer screen: 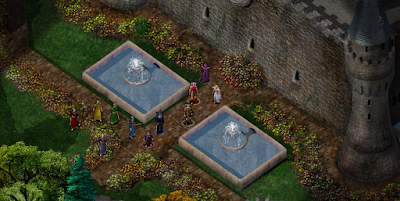 [The player character in BG is from Candlekeep. Towards the end of BG, the party returns to Candlekeep. Here is the party and some Seers.] 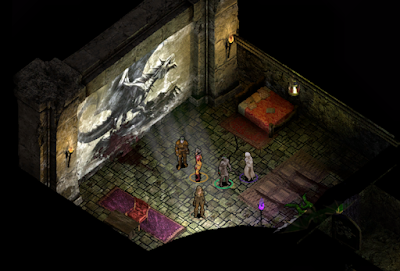 [The party discovers a dragon mural in a dungeon during the Siege of Dragonspear.] 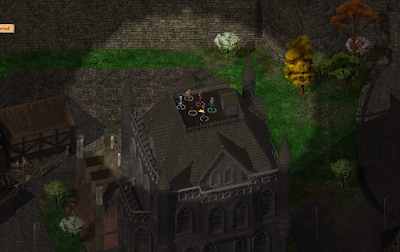 [The party at the top of the Iron Throne headquarters within the city of Baldur's Gate.] 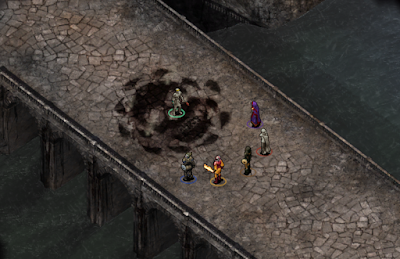 [The symbol of Bhaal burnt onto the surface of the Boareskyr Bridge.]

Another reason why I’m a fan of the IE games: their stories and characters. The BG series and (especially) PST have engaging overarching storylines, with multiple paths to success, including different routes for ‘good’, ‘neutral’, and ‘evil’ inclined characters (as well as for characters of different classes, etc.). To a great extent, the settings in these games are genuine ‘sandboxes’: they have maps with loads of optional encounters, quests, and areas (to be explored or ignored as you wish). Since they have overarching plots, though, there are some ‘necessary’ areas and encounters, but these often can be resolved in different ways.

The IE games also have some wonderful NPCs—both characters that can join your party, as well as minor characters with whom you can interact. Here is one exchange between two party members—Jan Jansen (an irreverent gnome illusionist/thief) and Keldorn (a serious paladin of Torm)—that I think is quite funny: 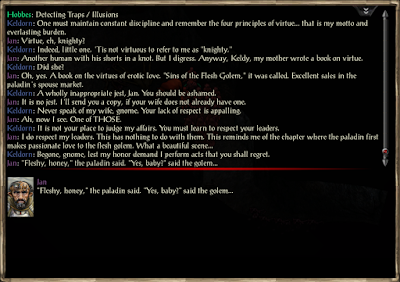 And since I teach philosophy in the real world, I find amusing this exchange in the town of Trademeet in Baldur’s Gate II: 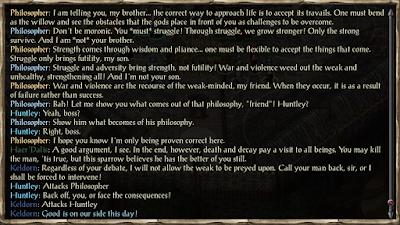 With respect to the settings for these games—the Sword Coast, Amn, and Icewind Dale of the Forgotten Realms (BG, BG2, and IWD), and the torus city of Sigil within Planescape (PST)—I delight in the ways that they embrace the ‘stew’ of disparate elements that make up ‘D&D’—and somehow make them work. By this I mean such elements as ‘Vancian’ magic-users, Scottish dwarf fighters, ‘Christian-not-Christian’ paladins who associate freely (often in the same adventuring party) with ‘paganistic’ druids, the Great Wheel cosmology, the Blood War (the eternal conflict between Chaotic demons and Lawful devils), and so forth. This all somehow makes sense in these games—and in fact is one of the reasons why I returned to D&D for some of my tabletop gaming after a long absence (most of the 1990s).

And then there are the ‘mods’ (which I believe is short for ‘modifications’, although it may also be short for ‘modules’). The ‘modding’ community—which has been reinvigorated in recent years thanks to Beamdog’s release of ‘Enhanced Editions’ of the IE games—has helped make these games, and especially the Baldur’s Gate series, highly re-playable. Mods can provide new NPCs (including characters to join your party), additions for existing NPCs (e.g., expanded dialogues for party members in BG1), new magic items, new encounters, and even entirely new adventures for your games. Install enough mods and your next BG2 game will be quite different from all previous ones!

Finally, while I prefer playing tabletop RPGs to CRPGs, there have been times in my life when this wasn’t possible, and the IE games (as well as NWN) were there to fill the void. Even when I am lucky enough to have a regular group, adult life makes getting together for games rather difficult (adulting is tough!). Thankfully, I can ‘dip into’ my Baldur’s Gate, Planescape: Torment, or Icewind Dale game for an hour whenever I like.

So, to Baldur’s Gate I say: happy birthday old friend!

Jack Vance’s Lyonesse: read it, discuss it, play it

As I’ve mentioned before here, the good people at the Design Mechanism are producing a role-playing game based upon Jack Vance’s Lyonesse trilogy. While the RPG will use the DM’s excellent Mythras system, the game itself will be self-standing (i.e., all of the rules will be in the core Lyonesse book, along with the setting material).

Here is a preview of the cover for the forthcoming DM book: 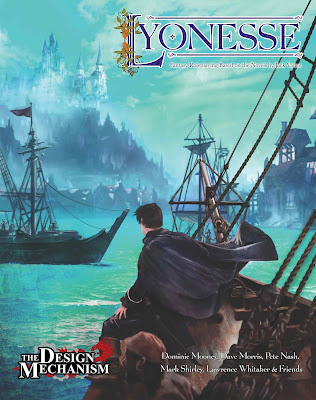 Vance’s Lyonnesse trilogy is one of my favourite fantasy series of all time. It fuses ‘high fantasy’ with the dark humour and weirdness of Vance’s Dying Earth stories. I’ve read it twice before—once in the early 1990s, and again about sixteen years ago. Upon learning of the DM’s forthcoming game set in the Elder Isles (the mythical lands south of Ireland where the stories take place), I decided to read the trilogy again. I’m now two-thirds of my way through it—I only have Madouc (the final volume) to go.

By happy coincidence, Lyonesse will be discussed at the Tabletop Role-players’ Book Club blog in January (starting on the 2nd). The plan seems to be to read the book (if you haven’t done so already) in December, and then discuss it with other gamers early in the new year.

Especially cool is the fact that the DM’s own Lawrence Whitaker (‘Loz’)—co-author of Mythras and RuneQuest 6, and author of numerous Elric!/Stormbringer RPG books, as well as many other fine things—will be taking part!

So, gentle readers, do yourself a favour and: (a) read this brilliant trilogy; (b) take part in the January discussions at TTRBC; (c) buy the DM Lyonesse RPG; and (d) have some adventures in a fantastic past-that-never-was.