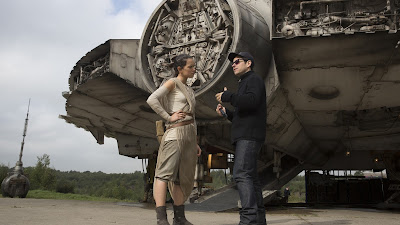 I like Star Wars well enough. More precisely, I love episodes IV and V (the original film, "A New Hope," and "The Empire Strikes Back"). I'm lukewarm on episode VI (everything until the Ewoks appear on screen is fine, especially the opening story involving Jabba the Hut). Like most sensible folks, I prefer not to think about episodes I-III at all. Overall, I find Star Wars to be a mixed bag. So I'm not exactly a 'fan'.  But I am looking forward to the new films. I hope that they recapture the spirit of the first two films.

This article on the new Star Wars franchise is quite good.  Not only does it discuss what is happening with the forthcoming films, in a broad sense, it also has a nice discussion of shared 'world building'.

Here are a couple of passages:


"All these people are describing more than just a franchise. What they’re talking about is a paracosm, psychology-speak for an imaginary world. Lots of little kids have them—especially creative ones. So do writers. Think Narnia or Yoknapatawpha County. J. R. R. Tolkien’s Middle-earth is an obvious example, with its multiple languages, cultures, and thousands of years of history."

"Lucas was the original keeper of the Star Wars flame, but now we all live in his paracosm. And come to think of it, maybe comics aren’t the best analogy; this is more like Dungeons & Dragons. (I mentioned: nerds.) Shared universes are distributed paracosms. The allusions frame out a world, and our imaginations build the rest—so we become invested in that alternate reality, not only as consumers but as participants."

Only a few more weeks until the new 'episode'! 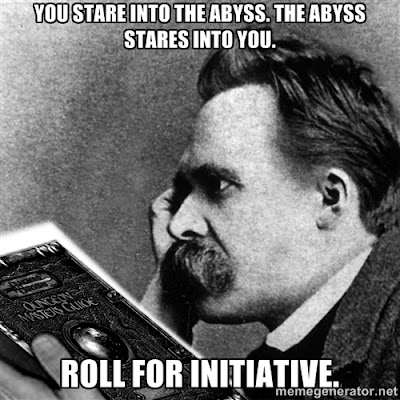 More of these gems can be found here.

Alas, the image is obviously phony. As most scholars know, Nietzsche was a first edition 'Gygaxian grognard' all the way. (E.g., see his important discussion of "halfling paladins" as the contemptible "last men" in Thus Spake Zarathustra.)

These images of life in the year 2000, as envisioned by some 19th Century artists, are pretty cool.  I think that they would be quite useful for a ‘steampunk’ style game, or perhaps a ‘parallel’ within the Luther Arkwright multiverse.

I found this one especially amusing: 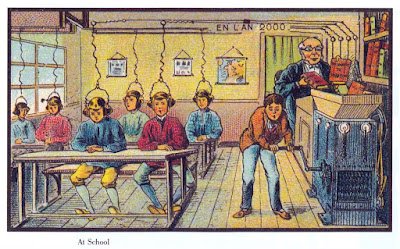 If only teaching were so easy in the 21st Century!