Just in time for summer: 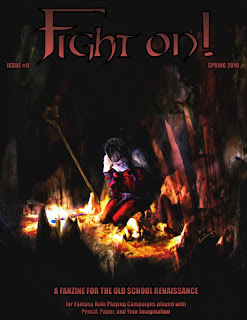 Available for sale via teh intraweb here.
Someday I will contribute to Fight On! again. Oh yes, someday...
Also in news: 'Old Guy' ChicagoWiz is blogging again.
And now, a completely tangential musing: I've just finished watching the second episode of 'The Tudors'. My suspicion is that this series will turn out to be only about half as good (if that) as 'Rome'...
Posted by Akrasia 4 comments:

In my last blog post I mentioned Jack Chick's amusing and absurd cautionary tale concerning the devilish dangers of 'Dungeons and Dragons' entitled 'Dark Dungeons' (now the title of a retro-clone of the D&D Rules Cyclopedia).
That post reminded me of two hilarious parodies of Jack Chick's tracts, both of which replace (Chick's extreme fundamentalist version of) Christianity with H. P. Lovecraft's Cthulhu Mythos.
The first faux Chick tract is called 'Why We're Here'. The second one is entitled 'Who Will Be Eaten First?'.
Enjoy!
Posted by Akrasia 2 comments:

Another Dungeons & Dragons ‘retro-clone’ has joined the rolls of the Old School Renaissance. This one is called ‘Dark Dungeons’ and it ‘clones’ the D&D Rules Cylcopedia, the amazing one-volume compilation of the rules from the D&D Basic, Expert, Companion, and Master Sets from the 1980s (the Rules Cyclopedia itself was published in 1991). 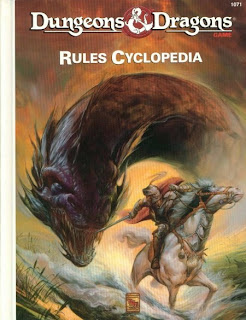 A free PDF of Dark Dungeons can be found here (along with links to Lulu to purchase the print versions). The Dark Dungeons blog is here.
Like all of the retro-clones, the rules found within Dark Dungeons deviate slightly from the original for the sake of legality. One difference between DD and the RC that especially struck me, based on a very quick look over, is the fact that the non-human classes (Dwarfs, Elfs, and Halflings) have a 36-level progression, just like the standard human classes. In addition, the skill list has been trimmed in order to avoid overlap with the special abilities of the character classes (unlike the list in the original RC). Also, the ‘planar cosmology’ is quite different from the one presented in the RC. (People familiar with TSR’s old ‘Spelljammer’ campaign setting report some resemblance to it.) Finally, the rules concerning becoming an Immortal seem to be fleshed out more than they were in the RC, and allegedly are based on the ‘Wrath of the Immortals’ D&D box set. (Yes, like the RC, becoming an Immortal is the ‘endgame’ of Dark Dungeons!)

Those of you familiar with the history of Dungeons and Dragons likely recognize the title ‘Dark Dungeons’ from the comic tract written by the Christian fundamentalist cartoonist Jack Chick (which can be read here). Chick’s absurd ‘Dark Dungeons’ cautionary tale has amused gamers for decades now, and naming a retro-clone after it seems strangely appropriate. Readers familiar with the original comic will, no doubt, be delighted to learn that the character ‘Black Leaf’ (a thief) is mentioned in the book – indeed, instead of dying pathetically from a poison needle trap, as she does in Chick’s comic, in the ‘Dark Dungeons’ preamble she goes on to become an Immortal! I doubt that Chick would approve of such an act of apotheosis…