There is a very good OpenQuest ‘bundle of holding’ deal available until April 4th.  It consists of four PDFs – the 2nd edition rules and three adventure packs – for only 8.95 USD.

So if you’ve been curious about OQ, the ‘rules-light-ish’ OGL version of RuneQuest published by D101 Games, then this would be an excellent opportunity to satisfy that curiosity! 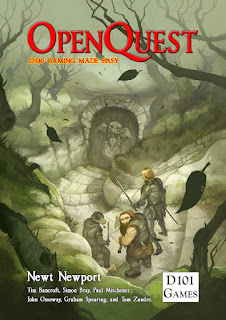 And for some interesting background on OQ – why and how Newt Newport created the system – check out this post at Newt’s ‘Sorcerer Under Mountain’ blog.

Can Gandalf be a 5th edition D&D magic-user?

Cubicle 7, publishers of The One Ring role-playing game, will be coming out with a series of Middle-earth products for Dungeons & Dragons 5th edition.

Here is the official announcement:


Cubicle 7 Entertainment and Sophisticated Games have announced plans to make a Dungeons & Dragons® compatible roleplaying series for J R R Tolkien’s legendary fantasy world of Middle-earth, the setting for The Lord of the Rings® and The Hobbit®.
Cubicle 7’s CEO Dominic McDowall said, “We’re all very excited to be building on the success of The One Ring Roleplaying Game and bringing Middle-earth to D&D® players. Uniting two things very close to the hearts of gamers, me included, is very cool – I can't wait for the summer.”
The best selling The One Ring Roleplaying Game will continue as a separate and independent line, with some very exciting announcements coming this week. The new series will be based upon Francesco Nepitello’s highly praised work in The One Ring®, with Francesco acting as creative consultant.
Further details will be released in the coming months, with the release set for Summer 2016.

This is exciting news, at least for me, as I played a ton of ICE's Middle-earth Role-playing ('MERP') during the glory days of my gaming youth (from the mid-1980s to the early 1990s). I haven't used Middle-earth  for my gaming in fifteen years, but I still very much like the world, and look forward to seeing what Cubicle 7 produces for it. (I assume that the standard 5e rules will be heavily tweaked, as they are quite inappropriate for Middle-earth as written.)

Do you remember the classic Dragon article: "Gandalf was a 5th level magic-user"? I guess we'll soon find out whether Gandalf can be a 5th edition magic-user... 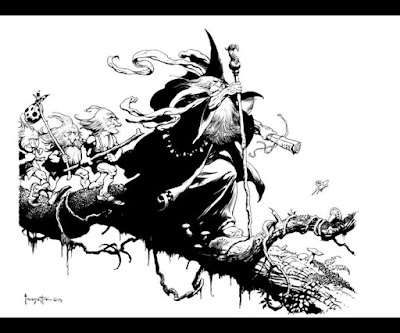 Are you in a Viking Saga?

"How to tell if you're in a Viking Saga."

I especially liked: "Greenland is horrible, but you have persuaded people to move there with false advertising." 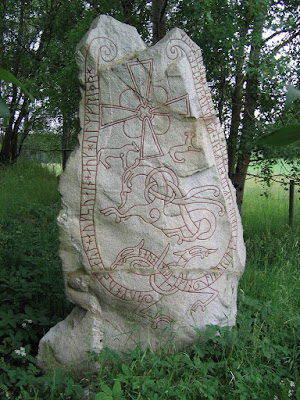 Review of Curse of Strahd 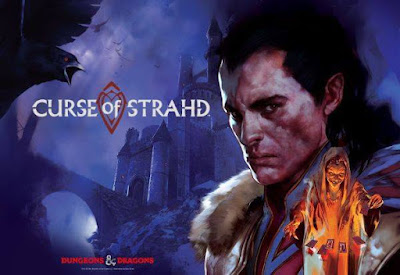 My friend Christopher Robichaud has given me permission to repost the following short review of WotC’s new 5th edition D&D adventure, Curse of Strahd.

The significantly disappointing thing about Curse of Strahd is that it's just the 5e version of I6: Ravenloft. And the thing is, I'm exhausted with that scenario.

All these adventures are basically the same story, with the same maps, told with a different rules set, and getting ever more bloated. (I6: Ravenloft is 32 pages, House of Strahd is 64 pages, Expedition to Castle Ravenloft is 220 pages, and Curse of Strahd is 256 pages.)

I longed for something more. Princes of the Apocalypse was, in my opinion, an ultimately disappointing reboot of Temple of Elemental Evil. But at least it tried to do something new with the mega-dungeon, as did its predecessor, 3e's Return to the Temple of Elemental Evil, a direct sequel to the original and quite good in its own right. We've gotten very little of that with Ravenloft. The original module has a weird and wild sequel, Ravenloft II: The House on Gryphon Hill, and of course, House of Strahd was part of 2e's entire Ravenloft campaign setting, which in addition to featuring lots of other villains, revisited Strahd on occasion with From the Shadows and Roots of Evil. But that's about it.

Of all the 5e campaigns WOTC has put out, this one is the biggest letdown. It's just a rehash of I6 with more of Barovia fleshed out, an idea already explored at length in Expedition to Castle Ravenloft. We don't need a 5e version of the same story. You can convert any of the 1e, 2e, or 3e Ravenloft modules just fine. What would've been great would have been a reboot along the lines of Princes of the Apocalypse. Even if it fell short, it would've been something fresh. Alas, it was not meant to be. Curse of Strahd, I'm afraid to say, is as stale as the air in the catacombs beneath Castle Ravenloft. What a shame.

In a follow-up message, Robichaud added:

I didn't mention that I think, as far as it goes, it's a fine 5e version of the module. It nicely expands the lands around the castle in a way that allows players to play in a sandbox more than just showing up and then heading right to the castle.

So perhaps there is a reason to get the adventure after-all (namely, if you want to use I6 in your 5e game, but can’t be bothered to convert I6 to 5e yourself). 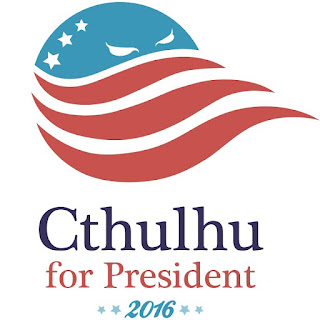 I'm not an American citizen. But if I were, I know that I would be supporting Cthulhu for president! The stars are right.

I look forward to reading this on the US dollar bill after 2017: "Ph’nglui mglw’nafh Cthulhu R’lyeh wgah’nagl fhtagn!"
Posted by Akrasia 4 comments: