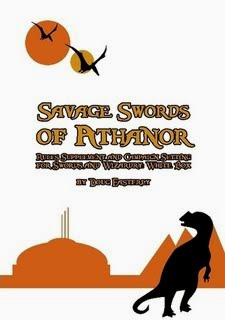 The Savage Swords of Athanor is another gem for the 'Swords & Wizardry' game.
This wonderful, digest-sized book includes a number of interesting house rules (including a 'background professions' system that looks remarkably similar to my own for S&W -- "great minds think alike," and all that).
It also describes the dying planet of Athanor, a place where magic co-exists with ancient technology, where dinosaurs prowl trackless deserts under a bloated red sun, and where players can take on the roles of lost 'earthmen' trying to find their way in a savage, alien world.
The cover does a brilliant job in capturing the flavour of the setting. It looks like it could be the cover of a 'science fantasy' or 'planetary romance' novel from the early 1970s.
Athanor is a wonderful mash-up of a setting. It includes mutations, weird science, clone vats, bizarre non-human races (arthropods, sentient humanoid fungoid creatures, etc.), and many other oddities. The names of the city-states of Athanor should be familiar to anyone who has read the work of R. E. Howard (although Athanor clearly is not based on any of Howard's stories).
The Savage Swords of Athanor is a fun read. Even if one had no interest in running an Athanor campaign, there are many evocative ideas to be found in this delightful little tome. Highly recommended!
Posted by Akrasia 2 comments:

I'm a fan of what sometimes is called 'weird fantasy': tales of the eldritch and eerie written by folks like Lovecraft, Howard, Leiber, Vance, CAS, et al.
Perhaps you are as well?
If so, you might want to check out the adventure 'Charnel Crypt of the Sightless Serpent'. Although designed for North Wind Adventures' game 'Astonishing Swordsmen & Sorcerers of Hyperborea' (which has yet to be released), it should be easy to use with any 'old school' version of A/D&D (OD&D, Basic D&D, 1e AD&D) and their respective retro-clones (S&W, LL, OSRIC), as well as 'near-clones' like C&C and BFRP.
I very much liked the earlier version of this adventure, which was published in the premier issue of Knockspell, and look forward to receiving my copy of the 'full version' in the near future. Also, I really dig the art displayed at their website.
Also in the 'weird fantasy' genre is the world of Fomalhaut. A website devoted to this wonderfully unconventional and idiosyncratic setting created by Gabor Lux (a.k.a. 'Melan') now exists .
I've been a fan of Fomalhaut ever since an overview of the setting was published in the third issue of Fight On! And my fondness for it has absolutely nothing to do with its inclusion of the following fine city:

Akrasia (pop. 1600) is otherwise, possessed of a gentle melancholy that many find charming. Its inhabitants like decorative gardens, orchards and the pleasant feeling of a gentle decline. The autumn mysteries attract a throng of pilgrims. During the festivities, youths and maidens raised for this specific purpose enter an enchanted gateway leading to a blissful land without trouble or toil, and are seen no more. The warrior sect in charge of guarding the gate are careful to warn off unlawful attempts at entry, but in spite of warnings, prowling beasts and vigilant guardsmen, there are always brave trespassers who are usually apprehended and summarily cut down before attaining their purpose.

Gabor Lux's adventures and setting material are second to none. I always enjoy reading them, even if I do have rather unnerving dreams afterwards.
Posted by Akrasia 6 comments:

And so, a new 'Old School D&D' fanzine, Encounter, enters the rolls of the OSR...
Posted by Akrasia 1 comment:

The Sleep of Akrasia... 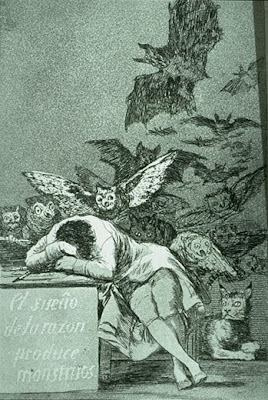 As some gentle readers may have noticed, I haven't had time to write any posts over the past month. Frustratingly, I likely will not have any time for blogging over the next few weeks as well. There simply are too many 'real life' issues that I have to deal with right now (mainly work-related, as term is winding up over the next few weeks and I'll have a crushing load of grading to do, but some other matters as well).
On a more positive note, it looks like I will be back in Toronto for the summer, and my old group seems eager to experience some Call of Cthulhu goodness!
Posted by Akrasia 4 comments: