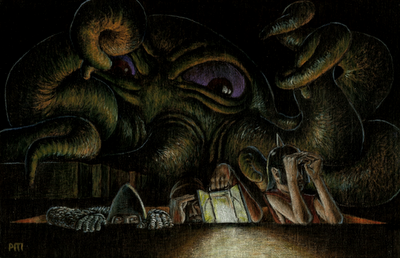 Kellri is looking for people interested in contributing material to a supplement for OSRIC (the 1e AD&D 'retro-clone') tentatively entitled 'Dangerous Dungeons'.
I hope to contribute something myself, time permitting (alas, the caveat 'time permitting' is not a trivial one!). It looks like an exciting and cool project. Whether or not I manage to contribute something, I'm looking forward already to the final product.
(BTW #1, if you haven't checked out some of Kellri's free old school material, you should! Especially brilliant is his Classic Dungeon Designer's Netbook #4: Old School Encounters Reference.)
(BTW #2, the above amazing illustration is by Pete Mullen. It graces the back cover of the OSRIC corebook. I wish it was the front cover!)
Posted by Akrasia 5 comments:

...and other fine libations now available for the thirsty gamer.
Good grief.
Posted by Akrasia No comments: 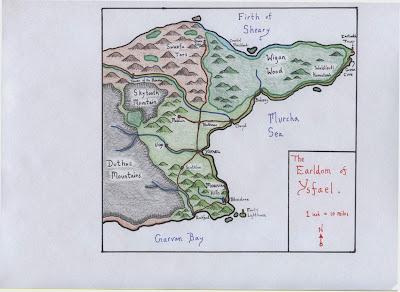 The Earldom of Ysfael is on the eastern coast of the island of Ilmahal, just across the Murcha Sea from the Duchy of Briz.
Unlike the Duchy of Briz, I don't have an overview (history and description of main sites) of Ysfael written. I seem to have lost the notes that I used for a brief Castles & Crusades campaign that I ran in Ysfael about five years ago (the C&C campaign was a follow-up to a year-long 3e D&D campaign that took place on Briz; it ended abruptly when I had to move to Ireland thanks to a much needed job offer). One of these days I'll write up another overview for Ysfael -- most likely once my focus leaves Briz (where my S&W campaign is located). Nonetheless, I'm pretty happy with this map, and thought that I would post it here for the sake of 'completeness' (that is, to have all of my Ilmahal-related maps available via this blog).
Perceptive readers might notice that the southern part of Ysfael looks remarkably similar to the regional maps of the old AD&D modules The Secret of Bone Hill (L1) and The Assassin's Knot (L2). The Ysfael town "Rockford" corresponds to L1's "Restenford," whereas "Bluestone" corresponds to L2's "Garrotten." Readers familiar with the AD&D module When A Star Falls (UK4) should recognize the "Tower of the Heavens." Less obvious is that "Bracca Keep," wedged between the Swaefa Tors and Wigan Wood, is the famous keep of the Basic D&D module Keep on the Borderlands (B2). I managed to run the modules B1 and B2, based around Bracca Keep, before the campaign ended. I regret that my group didn't manage to play through L1, L2, and UK4 (I had planned to run those modules in roughly that order). *sigh* Maybe some day...
Posted by Akrasia 4 comments:

My Answers to Some Questions regarding the Old School Renaissance

Over at the RPGsite, ‘Aos,’ a regular poster, asked a number of questions of the participants in the ‘Old School Renaissance’ about their views on old school gaming. In the unlikely event that anyone out there is curious, here are my answers to some of those questions. (The original thread can be found here. Beware that it gets pretty badly derailed a couple of times thanks to some complete tool who goes by moniker ‘mrk.’)

Are you hostile to new folks becoming interested in these games?

Most definitely not! My wife recently tried playing D&D for the first time. I used the Moldvay Basic rules. It worked very well (although she’s still not willing to commit to a full-time campaign …*sigh*).

In your opinion, what kind of dues does one have to pay in order to be a legitimate part of the movement, as opposed to a bandwagon-riding freeloader?

Simply play the games, even sporadically or on-line.

0e, which I've only recently become familiar with via S&W White Box (and which really lights my fire, honestly), begs for some hardcore house ruling. That said, what do you believe the limits are on this sort of change? How far is too far? When is it no longer old school? Is it required that everything one does have a precedent from the 70's/80's? Do skill systems blow the whole deal?

I’ve written some pretty extensive house rules for Swords & Wizardry in order to give the game a stronger ‘swords & sorcery’ flavour. They’re available here. I’m sure that many 0e D&D players would object to them (among other things, my house rules remove both the cleric class and ‘Vancian’ spellcasting). I’d object to them, too, if I wanted to run a ‘classic’ D&D campaign. For that, I’d use straight-up Basic D&D (or Labyrinth Lord).

As for the ‘limits’ to house ruling, I would leave that to individual groups to decide for themselves. But I do think that if you end up changing the game so radically that you have to spend an hour explaining to a newcomer your house rules, you’ve probably gone too far. At that point, you may as well write up your own game, or play something else.

For my own campaign setting (Ilmahal), I’ve banned non-human races. I wanted to keep non-humans mysterious, exotic, alien, and powerful. Consequently, I’ve limited them to NPCs.

If I were to run a ‘classic’ D&D campaign again, though, I would be quite happy with the ‘race-as-class’ system (the Basic D&D trio of Elf, Dwarf, and Halfling). I would, however, probably try to include a plurality of ‘racial classes’ in the future, e.g., a ‘Dwarf Rune-master’ as a dwarf spellcasting class, instead of simply a ‘Dwarf Cleric’ or ‘Dwarf Magic-user.’

Consequently, it should be no surprise that I am somewhat fond of the idea of having a separate spell list for elves. In general, I’m in favour of house rules that make non-humans more non-human, instead of simply humans-with-pointy-ears-and-infravision.

What does everyone think about character mortality in regards to old school games?

The real possibility of death must be present in order for the game to have an appropriate level of dramatic tension. There have to be real stakes and real risks.

However, I do give starting characters a bit of a boost. I give them maximum hit points, I let players re-roll characters that have poor ability scores, and a few other things. In short, I give them a modest ‘head start’ at level one. I’m sure that some old school gamers would view me as a real softy for doing this, but I’m not much bothered, as I like my players to feel like their characters aren’t utterly hopeless.

Having said that, though, once these slightly superior level one characters step into the dungeon (or whatever), I let the ‘dice fall where they may!’ And that sometimes means character death.

How frequently do TPK's happen in your games?

It hasn’t happened yet, since I started playing ‘old school’ games again about five years ago. Usually at least one character has enough sense to run away when an encounter goes sour.

Could one run a more heroic themed campaign and still consider it Old School?

The thief: awesome innovation, horrible abomination, or something else?

The thief as presented in all forms of pre-3e D&D is a rather poor class as written, in my opinion. His abilities seem vastly inferior to those of fighters, magic-users, and clerics. He has a very poor chance of succeeding in his ‘special abilities’ until he reaches higher levels. Consequently, I find the thief to be a rather ‘un-fun’ character to play. Back when I used to play AD&D, I remember that the only time anyone would play a thief was as a multi-classed demi-human character (Elf thief-magic-users and Dwarf thief-fighters were especially common). As written, I would recommend pure thieves as NPCs only.

Finally, I just read Will Mistretta’s house rule for the thief in Fight On! # 6, entitled “The Thief Skill As Saving Throw.” Mistretta recommends treating the thief’s special ability as a ‘saving throw’ that a thief character is entitled to if he fails his initial attempt at a task. So, for instance, both a thief and a fighter can try to climb a wall (with a chance of success to be determined by the DM), but if the thief fails, he can then roll against his ‘climb wall’ ability to see if he ends up succeeding after-all (the fighter, of course, has no such ‘saving throw’ option). It’s a rather ingenious house rule, in my opinion, and I very likely will use it if I ever run a ‘classic’ D&D campaign again!

Zachary Houghton has an interview with Daniel Proctor, the man behind Goblinoid Games (publishers of the Labyrinth Lord and Mutant Future RPGs), over at his RPG Blog II.
Posted by Akrasia 1 comment:

I forgot to mention in my last post that the latest issue of Fight On! -- the premier magazine of the 'Old School Renaissance' -- is now available! Check out their storefront at Lulu to order.
Yet another brilliant cover: 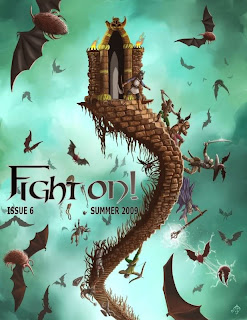 I have yet to dig into this issue, but a quick skim is enough to make me think that this is probably the best one yet!
Sadly, unlike #5, I was unable to contribute anything to this issue. Perhaps I'll get 'back in the game' for #7. (However, lest you think that I am a complete slacker, I do have a rather long article on 'swords & sorcery' style gaming coming out in the next issue of Knockspell.)
Congrats to Calithena for doing such a great job with Fight On! over six excellent issues. Long live the Old School Renaissance!
Posted by Akrasia No comments:

Sorry for the paucity of posting over the past few weeks, dear readers. I moved from Toronto to Milwaukee in late August (with over a week spent at my parents' place in London Ontario en route), settled into the new place, and have been extremely busy getting ready for the new term (which, alas, is now underway).
Unfortunately, there is still no new 'content' from yours truly, although I hope to start posting a summary of my summer Ilmahal 'mini-campaign' soon.
In the meantime, though, I'll simply mention that the revised version of the excellent 'Basic/Expert D&D' retro-clone, Labyrinth Lord, is now available. Check out the amazing new cover by Steve Zieser! 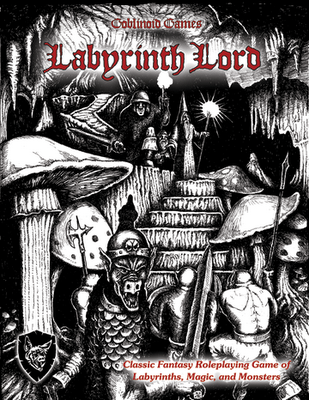