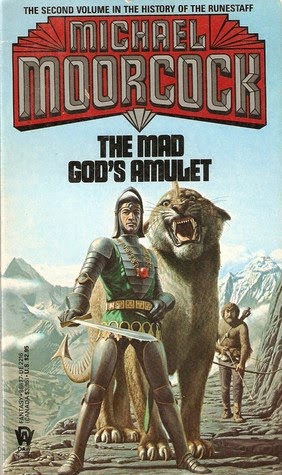 Over the past few years I’ve reread (or, in some cases, read for the first time) some of Michael Moorcock’s classic fantasy series.  I started with the two Corum trilogies, which I remembered as my favourites from decades ago.  I then reread the Elric stories.  Some of these (namely, those published after the late 1980s) I read for the for first time.  I found the Elric tales to be wide ranging in terms of quality, but at their best, they are wonderful and evocative, definitely ‘must reads’ for any fan of fantasy literature.  I also read The War Hound and the World’s Pain, which I thought was excellent.  Unfortunately, the subsequent novel, The City in the Autumn Stars, was a tedious slog, though the third one, The Dragon in the Sword, was somewhat better.  (The Dragon in the Sword actually is written from the perspective of Erekosë, and thus is also a sequel to The Silver Warriors.)

Last year I reread the original Hawkmoon tetralogy, The History of the Runestaff.  (I still have my paperbacks from the late 1980s, when I read them whilst vacationing at my parents’ cottage on Lake Huron.)

I quite enjoyed them, although not as much as either Moorcock’s Corum or Elric sagas.  The main reason is that I found the main character, Dorian Hawkmoon, to be somewhat insipid.  While quite interesting things happen to Hawkmoon, he himself is a rather flavourless, stereotypical ‘noble hero.’  Both Corum and Elric are far more interesting characters.  (And I found Hawkmoon’s love interest, Yisselda, the daughter of Count Brass, to be a bland, traditional ‘damsel-in-distress.’)

Fortunately, some of Hawkmoon’s companions are interesting.  There is the world-weary Count Brass, a grizzled veteran of many wars, now Lord Guardian of the Kamarg.  Also of note is Oladhan, an honourable dwarf and skilled archer, the hirsute son of a human and mountain giant.  Finally, there is the Frenchman Huillam d'Averc, who first encounters Hawkmoon whilst serving as a mercenary in the army of evil Granbretan, but later allies himself with the Kamarg.  D’Averc is far more witty, clever, and all-around interesting than Hawkmoon (he sort plays the ‘Han Solo’ to Hawkmoon’s ‘Luke Skywalker’).  The story improves markedly whenever he is featured.

But the characters who truly shine in the tetralogy are the villains, especially the various leaders of the malevolent Empire of Granbretan.  There is the hideous immortal King-Emperor Huon, preserved for countless centuries in an orb of life-preserving fluid, whose withered body resembles a wrinkled fetus, and who speaks with vocal chords torn from a melodic youth.  There is Baron Meliadus , a charismatic psychopath, who lusts after Yisselda (for reasons I can’t fathom), and seeks to crush the Kamarg at any cost.  He’s the kind of villain that one loves to hate.   There is Taragorm of the Palace of Time, whose mask is a working clock...

Ah yes, the masks.  One thing that makes the Granbretans so interesting as a people is the fact that they are compelled to wear masks whenever out in public.  Indeed, their whole society manifests a kind of mental illness.  All Granbretans belong to different ‘orders,’ each of which has its own official mask (the leaders wear ones shaped from fine metals, with gems, etc.), most of which are modeled on animals (wolves, rats, mantises, and so forth), though there are some exceptions (such as Taragorm’s clock).  The society overall is rigidly ordered and hierarchical, with baroque architecture and items that are mixes of technology and magic.  And it is, well, evil: Granbretans see their destiny to be that of dominating the world, and perhaps the multiverse, under the despotic rule of the undying Huon.  I would be hard pressed to think of a more colourful and frankly ‘fun’ evil empire in fantasy literature.

So I recommend reading the Hawkmoon tetralogy, but for the secondary characters, villains, and the distinctive setting -- not the protagonist! 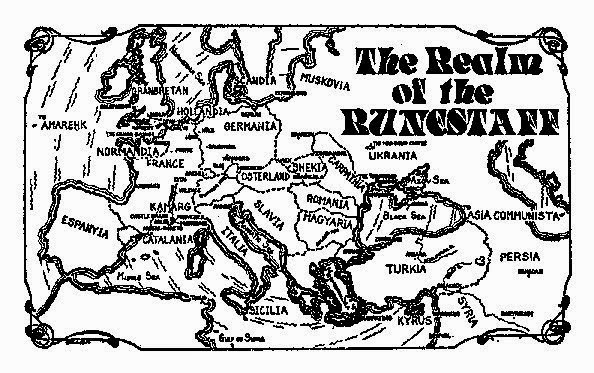 Basic Dungeons and Dragons 5e to be a Free PDF 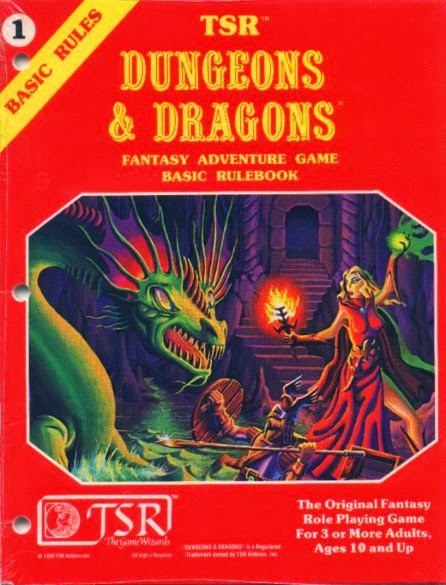 There will be a 'Basic' version of the '5th' edition of Dungeons and Dragons:


Basic D&D is a PDF that covers the core of the game. It’s the equivalent of the old D&D Rules Cyclopedia, though it doesn’t have quite the same scope (for example, it won’t go into detail on a setting). It runs from levels 1 to 20 and covers the cleric, fighter, rogue, and wizard, presenting what we view as the essential subclass for each. It also provides the dwarf, elf, halfling, and human as race options.

No Erol Otus cover, alas, but pretty cool nonetheless.  (I remember when 3e was released I wished that something like a viable 'Basic' version had been available.)

While I wish that this would be a print product, or at least that a print version would be made available, I certainly cannot complain about the price:


But the best part? Basic D&D is a free PDF. Anyone can download it from our [WotC] website.

Nice move.  I can forgive (almost!) the absence of character creation rules from the starter rules.

Why Do We Seem to be Alone in the Universe?

This article on the 'Fermi Paradox' is pretty awesome.

(Fans of authors like Ian M. Banks and Alastair Reynolds especially will enjoy it, I think.)

The necessary rules for character creation will not be included in the forthcoming D&D 'starter set'.  From Mike Mearls's twitter thing:


To clear up the Starter Set - it's aimed at DMs, so no PC creation in the box. But players will be able to make characters without it.

This strikes me as a dreadful decision.  Players want to create their own characters, not use one of five pre-made generic characters.  When I first started out in this hobby, over three decades ago (!), character creation was a favourite way to pass the time.  Also, it helped me to learn the rules.


Approx 15% of the D&D Player's Handbook will be free on WotC site to cover the basics of building characters for those getting Starter Sets. 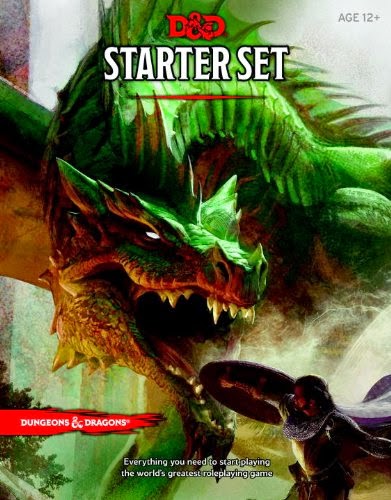 Although I haven’t been following the development of the ‘5th edition’ of Dungeons and Dragons very closely (indeed, not at all over the past year), I could not avoid learning that it very likely would start being released this summer.  And now it’s official.  The core rules will be released from July 20th to November 18th.

I’ll be getting the ‘Basic Set’ – er… the ‘Starter Set’ – for sure.  The price is okay, and I would like to see what this version of the game looks like.

I really hope that I like what I see, that it turns out to be the case that the wonderful ‘Old School Renaissance’ did indeed have some impact on the development of 5th edition.   I hope this not because I’m dependent on the Wizards of the Coast for my RPG needs.  (Quite the contrary.  The only WotC products that I’ve purchased in recent years were the reprints of the 1st edition AD&D rules and modules, the reprint of the original (1974) D&D rules, and some PDFs of out-of-print materials.)  For ‘D&D-style’ gaming, my copies of 1st edition AD&D, Basic/Expert D&D, 0e D&D, the ‘clones’ like OSRIC and Swords & Wizardry, and the ‘quasi-clone’ Crypts & Things, will continue to meet my needs perfectly well.  Nonetheless, I would be delighted to see a broadly ‘old school’ style of play being supported, at least to some extent, by the hobby’s leader (or one of its leaders, if WotC really has been supplanted by Paizo).

The price for the core books, though, certainly is worrisome: 150 USD for the traditional triumvirate!
Posted by Akrasia 5 comments:

Worlds Collide Again: The Analytic Philosophers versus a Lich

Here is another amusing strip on "Dungeons and Dragons and Philosophers" from Existential Comics! 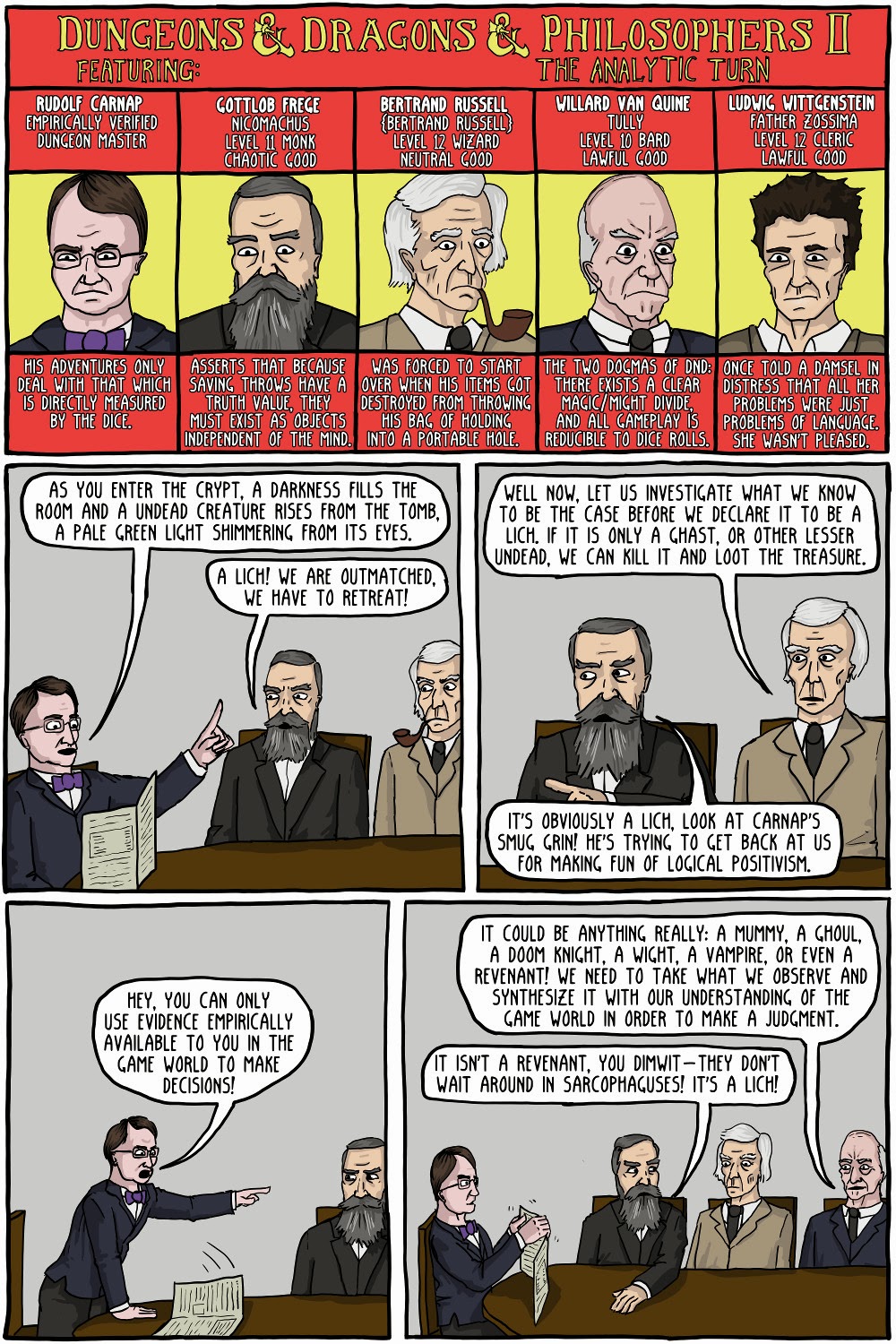 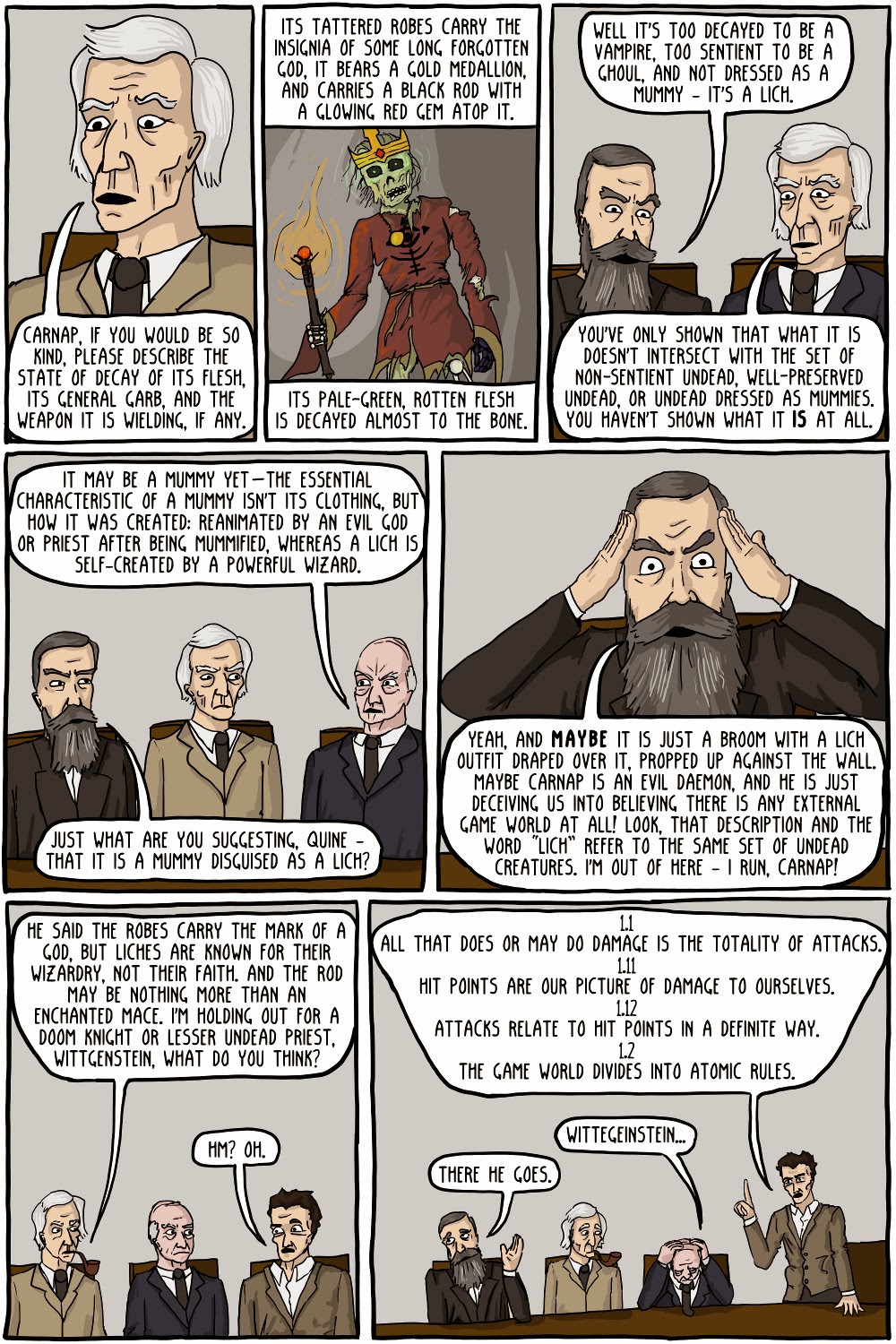 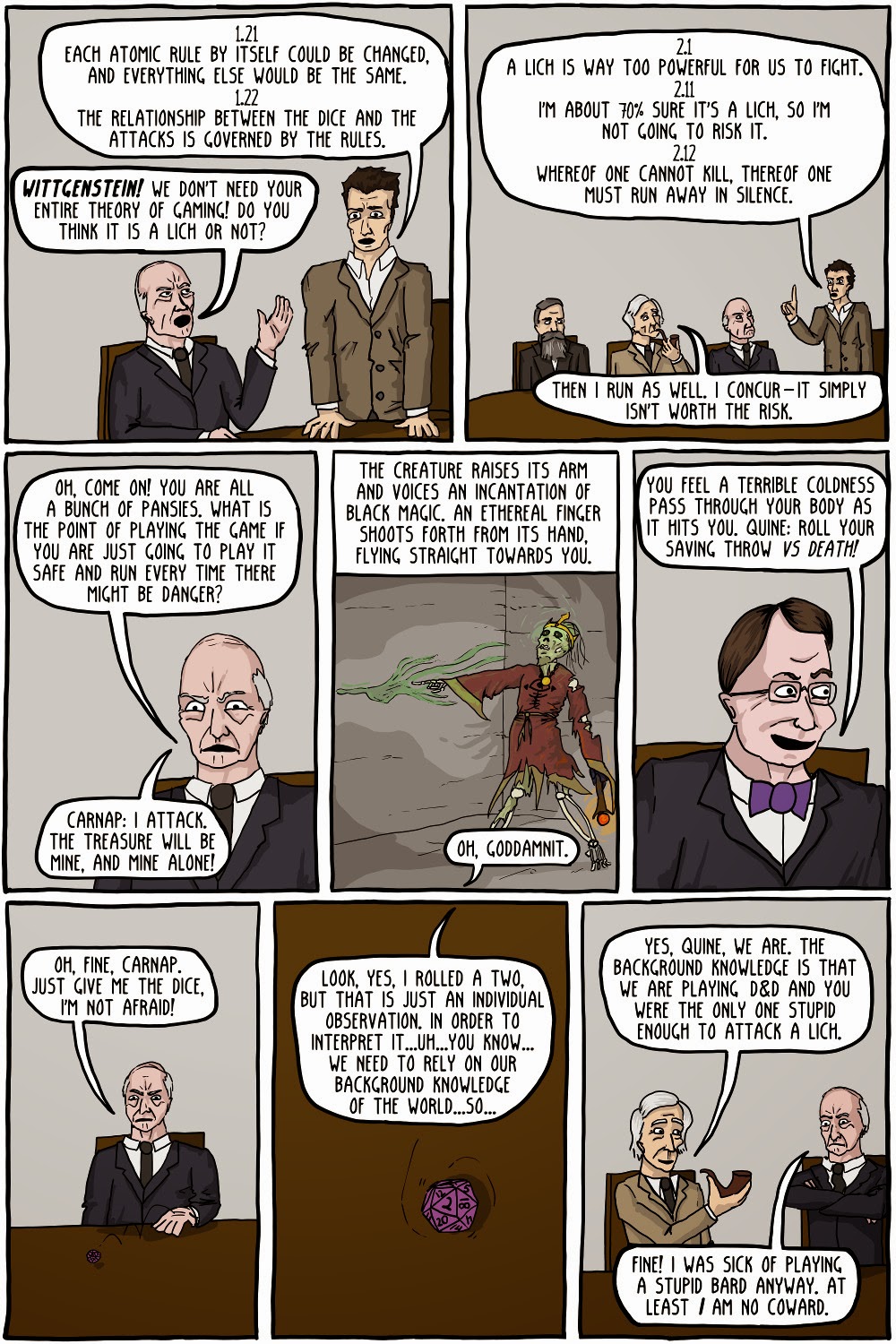 (I assume that posting this comic here is fine, ethically and legally, since it's available for free at the 'Existential Comics' website, and I have linked to that website.  If I'm mistaken about this, let me know and I'll take it down.)
Posted by Akrasia No comments: