Temple of the Flayed Lord 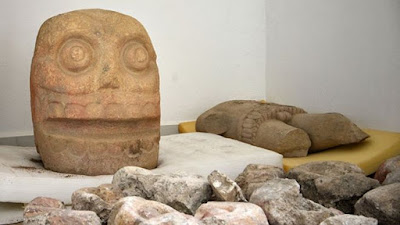 In case you need some inspiration for a new Cthulhu Mythos style cult (also eminently useable for fantasy and historical role-playing games):

Mexican experts say they have found the first temple of the Flayed Lord, a pre-Hispanic fertility god depicted as a skinned human corpse.
[...]
The institute said experts found two skull-like stone carvings and a stone trunk depicting the god, Xipe Totec. It had an extra hand dangling off one arm, suggesting the god was wearing the skin of a sacrificial victim.
Priests worshipped Xipe Totec by skinning human victims and then donning their skins. The ritual was seen as a way to ensure fertility and regeneration.
The Popolocas built the temple at a complex known as Ndachjian-Tehuacan between AD 1000 and 1260 and were later conquered by the Aztecs.

More information on the charming Xipe Totec and his ancient Popolocas followers can be found here.