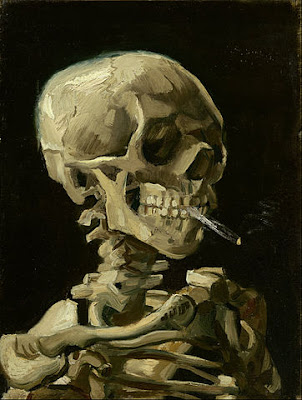 Here are 10 haunted sites from across the world to give you some chills this eldritch evening.

(The picture above is "Head of a skeleton with a burning cigarette" by Vincent van Gogh.)
Posted by Akrasia No comments:

The Future of Chaosium, Basic Roleplaying, RuneQuest, and the Call of Cthulhu 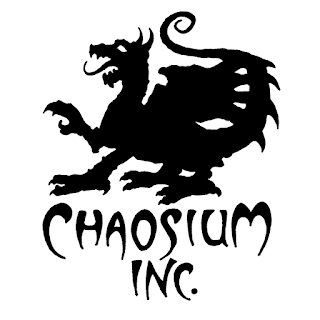 There have been many changes happening within the Basic Roleplaying ('d100') world, specifically, with Chaosium and the Design Mechanism.  (Some of the ownership changes already have been mentioned in an earlier post.)  Here is my understanding of the changes that I think will be of most interest to gamers.

1. The RuneQuest 6 rules will form the basis for the next generation of Basic Roleplaying (BRP).

Chaosium will be coming out with a new version of BRP, to be called Basic Roleplaying Essentials (‘BRPE’).  BRPE will be a rules booklet (32 pages!) that, like the famous one of yore, will serve as the ‘core’ for all future Chaosium games (with one important exception, which I’ll get to below).  BRPE will be based upon the RuneQuest 6 rules.  (Fortunately for devotees of the earlier version of BRP, it looks like the ‘gold book’ – and various other products, like Magic World – will continue to be available as PDFs.)

So for fans of RQ6, the future looks bright with BRPE.  Already a BRPE-based version of Mythic Iceland is in the works.

2. The next version of RuneQuest will use the RQ6 rules but will be set in Glorantha.

Chaosium plans to publish a ‘new’ version of RuneQuest next year.  The rules will be those of RuneQuest 6, though perhaps with some minor changes.  One big change, however, is that Glorantha will be included within the core book, and the rules will be adapted for that setting (in terms of magic, cults, beasts, cultures, and so forth).

I’m not too keen on this move myself, as I prefer the setting-neutral version of RQ.  But if the rules themselves will not change (much), I’m not too bothered, as I already own 5 copies of RQ6, plus the PDF.  Also, it is not clear yet whether something like the PDF version of RQ6 or ‘RQ Essentials’ will continue to be available after next summer.

In any case, the 32-page BRPE rules will obviate somewhat the need for a system-neutral version of RQ.  (I say ‘somewhat’ as BRPE will not include any rules for magic, stats for monsters, and a few of other things that are essential for running fantasy role-playing campaigns.)

3. The Design Mechanism will continue to publish material for RuneQuest.

Design Mechanism’s settings will continue to enjoy support.  So Mythic Britain, Monster Island, Luther Arkwright, and the like, will not be disappearing anytime soon.

Lawrence Whitaker previews the Design Mechanism’s plans for the near future in the following post (with further discussion at the DM discussion board):


Our release plans have had to be modified, and Pete and I have a few things to work out - more around how rules are handled than the titles we publish. Some things I can expand on.

1. More Mythics - Mesopotamia, Saxons and Greece. Not sure what will happen with Mythic Constantinople. Mob says he still wants to do it and has an outline written (indeed, Pete and I have played in part of it), but it’s a long shot. Mythic Britain will be extended by both a Logres, Saxon-based campaign (written by Paul Mitchener) and more scenarios from me (I have one I’ll be playtesting at a couple of local cons and with my own group).

2. More Arkwright - Scenarios and Parallels. I’m actually keen to see submissions for Arkwright adventures so if you have an idea, let me know.

3. More Sword and Sorcery - I’m actively thinking about expanding the Scourged Earth setting hinted at in the GM Pack, and resurrecting a set of Elric/Stormbringer scenarios I wrote many years ago to fit with the setting. One scenario is complete and I’m working on another. I’ve also been fleshing out the Scourged Earth/Wall background with some physics and dimensions for the Wall itself.

4. More Thennla - I have Jon’s Taskan Campaign waiting for review and layout. I’ve postponed work on this pending some of the rules considerations we need to make, but it will certainly appear. I will also be talking to Jon about Assabian Rites as the next book.

5. More one-offs - Short scenarios and so on.

6. A project we can’t announce yet, but is genre-based and should be a lot of fun.

What you won’t see from us is any Gloranthan material. That will be handled through Chaosium. However, I’m heavily involved in laying out Ian Cooper’s ‘Coming Storm’ books, and I’m very keen to create an RQ stat pack for it.

There will be a much fuller announcement on Design Mechanism’s future this side of Christmas. There are going to be some important changes, but we’re still writing, developing, commissioning and publishing our own stuff, so from that POV, it’s business as usual.

All this sounds pretty great, and I’m looking forward to checking out a number of these items when they become available.

4. The print version of Call of Cthulhu 7th edition is coming along – finally.

The kickstarter campaign for the 7th edition of the Call of Cthulhu role-playing game has been beset with a surfeit of problems and delays.  They are too numerous to catalogue here (and, frankly, I’ve long since stopped following the progress of CoC 7e).  But thanks to the new management team at Chaosium, we should be seeing the print versions of CoC 7e, and associated materials, in the very near future.

(Like other backers of the kickstarter, I’ve had the PDF version for a while now, although I expect that it will be updated in the near future to match the books.  And I recently received the PDF for Petersen’s Field Guide to Lovecraftian Horrors.  So the wheels are turning, at long last.)

5. No ‘unification’ of the Call of Cthulhu and the RQ-based BRP systems.

While BRPE will serve as the core for most future Chaosium role-playing games, no changes will be made to the CoC 7e system.  So Chaosium’s role-playing game lines will not be fully ‘unified’ – though, of course, CoC 7e and BRPE will share many similarities, given their common ancestor.

Whatever one thinks of 7e CoC (and I think it’s perfectly fine), this decision makes sense.  The last thing that Call of Cthulhu needs now is another revision!   Let the game be played for a few years, at least, before even contemplating any changes.  Moreover, I’m not sure that BRPE would be a great fit for CoC.  Combat is very detailed in RQ6 and BRPE – and the awesome combat system is, of course, one of the things that makes that game great – but combat really is not the focus for most CoC games.  Overall, I think that the core CoC rules need to be even ‘lighter’ than those of BRPE.  Perhaps I’m wrong about this, but even if so, it should be some time before Chaosium contemplates producing another version of CoC.

6. The discussion board ‘BRP Central’ is now the official Chaosium board.

Here it is the link to BRP Central, in case you’d like to join!

I’ve been a member for a few years now, though I don’t post there too often.  That may change in the future, however, given all of the exciting developments with respect to BRP.

So those are top ‘news items’ concerning the future of RuneQuest, Basic Roleplaying, and the Call of Cthulhu games – at least to the best of my knowledge.  Overall I think that the future is very bright!  ‘BRP Essentials’ looks like a great introduction to the system (I’ve skimmed through a draft).  The Design Mechanism will continue producing brilliant settings and adventures for RuneQuest.  And the Call of Cthulhu looks to finally be stirring from its rest in deep, dark R’lyeh.

The Epic of Gilgamesh: Expanded Edition

After only 4000 years, the Epic of Gilgamesh is being updated. 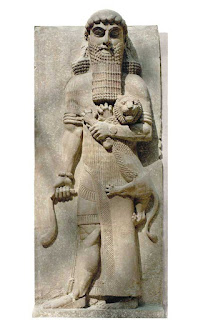 Over a year ago I briefly mentioned the ‘Fermi Paradox’ in a post.  It seems that Edward Snowden has a solution!  Namely: alien civilizations share a universal need to keep their communications secure. Consequently, "alien signals are simply too well encrypted to be distinguished from background noise."

This actually strikes me as an eminently plausible explanation.  And it certainly is far less distressing than the one offered by Alastair Reynolds in Revelation Space.