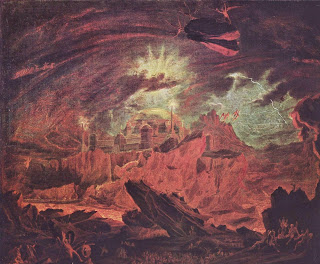 ... is where this blog will be for at least a week, as I'm swamped with 'real life' matters (travel, work, etc.).
Posted by Akrasia 2 comments:

I’ve been working my way through the core Clockwork and Chivalry book over the past couple of weeks, and I think that this is the best new setting for any RPG in years.

But don’t take my word for it. Read this review of the core book.

There also are now reviews of the first two adventure modules for the setting: The Alchemist’s Wife and Though Shalt Not Suffer.

I can hardly wait until this guy makes an appearance in a C&C adventure: 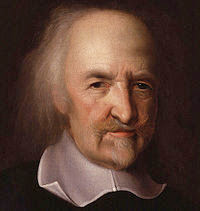 Hopefully the lives of the characters will not be too "poor, nasty, brutish, and short"!
Posted by Akrasia 2 comments:

Alas, it would seem that the recent resurrection of the Classic D&D fanzine ODDITIES is to be short-lived. L

But it in its place we have Tales From the Dusty Vault, a blog with high-quality reviews of the products of the OSR. J 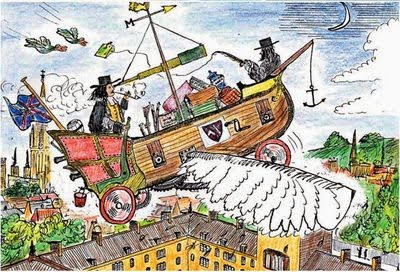 I mentioned in an earlier post my fascination with 17th Century England, especially the Civil War era. This fascinating article describes the views of one Dr John Wilkins, a 17th Century Oxonian scientist, on a possible lunar mission. Here is a short excerpt:

Incredible as it may seem, one of the greatest scientific minds of the time, Dr John Wilkins, a founder of the Royal Society, was planning his own lunar mission four centuries ago around the time of the English Civil War.

It wasn’t hot air either. Inspired by the great voyages of discovery around the globe by Columbus, Drake and Magellan, Dr Wilkins imagined that it would just be another small step to reach the Moon.

Wilkins, who was a brother-in-law of Oliver Cromwell, explored the possibilities in two books. Records show he began exploring prototypes for spaceships, or flying chariots as he called them, to carry the astronauts.

The Jacobean space programme, as Oxford science historian Dr Allan Chapman calls it, flourished because this was a golden period for science. Huge discoveries had been made in geography, astronomy and anatomy. Seventeenth century scientists were riding a wave.

I wonder if the thoughts of Dr Wilkins on space travel form the basis for the forthcoming 'Quintessence' Clockwork & Chivalry adventure module? Below is the cover for that module (from here). 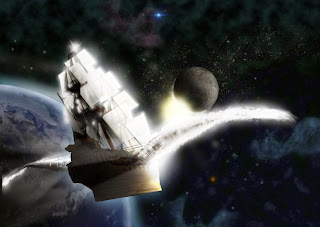 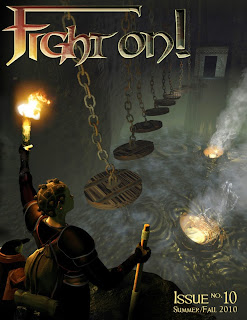 A very lazy post from yours truly to announce simply that issue 10 of Fight On! is now available.
Here is the cool blurb from Calithena (with the relevant links inserted):

You can check out the print version here...

...or check the link in my sig for the whole store and all the issues of the magazine from beginning to present. Also, look out for our first fantasy fiction anthology, Roll the Bones, due out this Fall (Halloween? Could happen…) Here’s the TOC to whet your appetite:

Looks awesome, as usual!
And, interestingly (given my current BRP quasi-obsession), it looks like issue 11 will be focused on RuneQuest...
Posted by Akrasia No comments:

A few weeks ago Mythmere Games and Frog God Games announced that they would be producing a new, expanded version of 'Swords & Wizardry' -- namely, a 'Complete' version (see here.)
At that time, the fellow in charge of S&W, Matt Finch, noted that the following things would be included in the 'Complete' version:

It includes the ranger from SR, the paladin, thief, druid, assassin - character classes from the supplements. Still no illusionist, though, which was disappointing, but the SR illusionist just couldn't legally be duplicated. The game still runs on the 0e rules, not 1e. It includes two optional alternative order of combat systems in addition to the standard one from the WhiteBox era: the one from the Holmes Blue Book and one that's based on the EW system. Those are the main differences, although there are little things like adding strength modifiers to the amount of weight that can be carried, ala Supplement 1, etc. Virtually all of the additions are in the player section, not the referee section. It's compatible with the Core Rules, and the Core Rules will stay in place as the archetypal "three class" system.
...
One especially nice thing is that our Druid class description is written by Dennis Sustare (the original author who invented the druid character class - think, "Chariot of").

We now have some additional information from Matt on what will be included:

Here's the basic scoop, though I may have forgotten something:
Siege rules
Aerial combat
Mass combat (already there)
Naval combat

No more wild boards in the monster listing

Building strongholds - prices for walls and keeps and such

Original saving throw numbers are listed as a chart in a side-box in case people want to use those.

Can't remember what else.

(Original post here.)
This all sounds great to me. I can hardly wait to see the final product! (Even if I do seem somewhat fixated on BRP-powered games these days.)
Posted by Akrasia 2 comments: 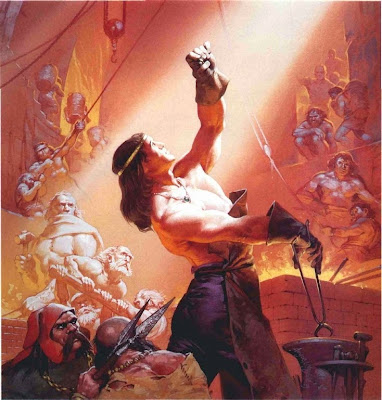 I’ve long been a huge fan of J.R.R. Tolkien’s Middle-earth (as evidenced by past posts like this one and this one). I’m also a (relatively new) fan of the d100 game OpenQuest (see, for instance, my comments here).

Recently I’ve been wondering about possibly using OpenQuest to run a Middle-earth campaign. However, it looks like I need not expend the effort of revising the OQ rules to do so, as Kristian Richards already has combined Middle-earth peanut butter with OpenQuest chocolate in his ‘The Age of Shadow.’

Yes, the setting is not ‘officially’ set in Middle-earth, but it clearly is inspired by that world, and especially the tales of its First Age, as detailed by the good Professor in The Silmarillion. (As an aside, I don’t see any reason why the rules could not be used for campaigns set in later ages of Middle-earth.)

So if you like Middle-earth and OpenQuest (or any other BRP/d100 game), check out The Age of Shadow! (Hat tip: Sorcerer Under Mountain.)

(Above is another amazing picture by the late, great Angus McBride. It depicts Celebrimbor forging a ring of power in the mid-Second Age.) 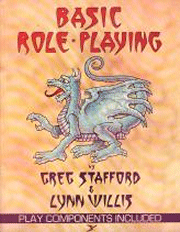 The ‘Old School Renaissance’, at least with respect to D&D and AD&D, is a well known and (by now) a well-established phenomenon within our strange little hobby.

However, it seems that the gaming community is in the midst of another renaissance, namely, a renaissance of ‘Basic Role-playing’ (‘BRP’) or ‘d100’ games and settings.

BRP-based games never ceased being published altogether by (at least one) professional RPG company, unlike ‘classic’ D&D and AD&D (0e, Basic, and 1e). And even though Chaosium, like many other RPG companies, had a ‘near death’ experience during the 1990s, it never actually went under.

Impressively, Chaosium’s role-playing games always have been ‘powered’ by BRP, the essentials of which have remained largely unchanged for three decades now.

Things looked pretty grim for Chaosium and BRP early in the twenty-first century. As far as I know, the only BRP-based role-playing games still being published were Call of Cthulhu and Stormbringer (5th edition). (Although I believe that Pendragon also saw sporadic support.) Stormbringer was barely supported. Only one supplement was produced for it during the 0s, namely, the superb Corum book from Darcsyde Productions. (Although Elric! supplements were fully compatible with Stormbringer 5e, those all had been produced during the 1990s.)

These days, though, things look dramatically improved for BRP!

Chaosium published a complete ‘core book’ for BRP in 2008. It includes the core BRP rules, as well as most of the optional rules found in various BRP games and supplements published by Chaosium over its long history.

Call of Cthulhu, of course, continues to be supported by Chaosium, as well as some other companies, such as Goodman Games.

Alphetar Games has published a number of books for BRP, including what I believe must be the best single RPG book on ‘Rome’ ever published.

Cubicle Seven has just come out with The Laundry RPG (as well as a few CoC books). I recently purchased The Laundry PDF, and my first impression of it is very favourable indeed. I’ve only read Charlie Stross’s first Laundry book, but I liked it very much, and plan to read the rest in the series. It strikes me as a great setting for a (not-fully-serious) CoC-flavoured game. (Alas, Yog-Sothoth only knows when I’ll be able to give the Laundry RPG a proper read…) 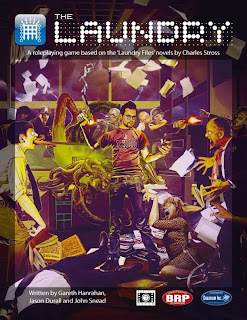 And although out of print, most of Chaosium’s back catalogue of Stormbringer (first and fourth editions), Elric!, and Hawkmoon materials are now available in PDF (thanks to an arrangement with Mongoose Games).

Then we have Mongoose Games’ RuneQuest II. My impression is that Mongoose’s first attempt to resurrect RuneQuest was something less than a ringing success. I know that I decided against purchasing anything for MRQ when I skimmed through the initial book. Subsequent reviews confirmed my early negative judgement. Moreover, Mongoose’s long record of poor editing and spotty quality control in their books made me decide against giving MRQ a shot.

However, based on some favourable initial reports, I decided to give Mongoose’s second effort at RuneQuest a shot. I’m very glad that I did, as the core book avoided the usual Mongoose missteps. Moreover, the system looks very, very well designed. I think that Lawrence Whitaker and Pete Nash did an excellent job! (Sadly, I suspect that MRQII is too ‘rules heavy’ for my regular players. But perhaps I might eventually convince them to give it a shot…)

Probably my favourite new BRP setting produced in recent years is Clockwork & Chivalry – a MRQII campaign book published by Cubicle 7 that describes an ‘alternative history’ version of 17th Century England. I drooled in anticipation over this setting in this post. Now that I’ve received the book and looked through it, I believe that my earlier enthusiasm has been entirely vindicated.

Last – but certainly not least! – there is RuneQuest’s ‘lighter’ and ‘simpler’ cousin OpenQuest, written and supported by a friend of this blog, Newt Newport. I’ve raved about OQ in past posts here, so I shall refrain from doing so again now. However, interested readers may want to look at my comparison of MRQII and OQ. 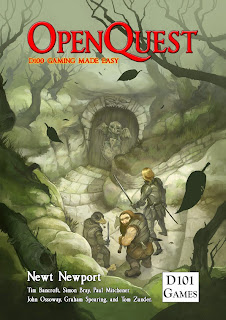 So, lots of cool things are available for BRP these days! Among them:

· The usual wide range of Call of Cthulhu material

· The Clockwork & Chivalry Setting for MRQII

For such an old system, BRP looks to be in surprisingly good health! J