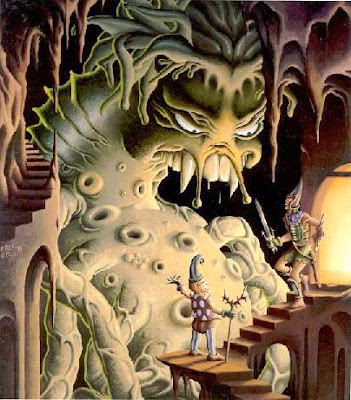 Here are some of the main reasons why I prefer ‘old school’ Dungeons and Dragons over more recent versions (specifically, 3rd edition and 4th edition).  By ‘old school’ D&D, I mean Original D&D (0e), Classic D&D (Basic/Expert D&D and Rules Cyclopedia D&D), and 1e Advanced D&D – and their respective retro-clones (Swords & Wizardry, Labyrinth Lord, and OSRIC).  For the sake of simplicity, I will use ‘OSD&D’ to refer to ‘old school D&D’ (covering all pre-3e versions of D&D, although I should mention that I never really played 2e AD&D, aside from the ‘Baldur’s Gate’ computer games).

1. It is very easy to prepare for OSD&D sessions (about one hour of prep for every four hours of play, in my experience).

3. It is easy to run OSD&D without miniatures and battle mats (or their equivalent).

4. As a consequence of the above two points, OSD&D combats typically are over in 2 to 10 minutes.

5. Sessions run at a very brisk pace.  With any old school D&D system I generally can get through about three-times as much ‘adventuring’ as I could when I played 3e D&D.

6. Arch-mages (high-level magic-users) rule over all.  It makes sense to me that individuals who have mastered the elemental forces of nature should be more powerful than others.  This is ‘balanced’ in OSD&D by the vulnerability and weakness of low-level magic-users.  The obsession that later editions have with ‘balance’ mean that they endeavour to ensure that high-level magic-users are equally powerful to other classes (fighters, thieves, etc.).  This just seems ridiculous to me.

7. Characters gain diminishing returns for experience points at higher levels.  After reaching ‘name level,’ characters in OSD&D no longer receive hit dice, their progression rates ‘flatten,’ their acquisition of new special abilities slows down, and so forth.  This makes sense to me.  After becoming one of the most powerful individuals in the world, it seems right that a character is not going to improve at the same dramatic rate that he or she did as a neophyte.

8. Most versions of OSD&D include rules for player characters’ strongholds and dominions.  OSD&D has an ‘endgame,’ in the sense that high-level characters can establish strongholds and dominions, and thus become noteworthy political forces in the campaign setting.  This provides a good place for a campaign to end – and allows past characters to have an impact on the overall history of the campaign setting (perhaps returning in a later campaigns as powerful patrons, or even foes).  (Of course, it is not required that characters engage in this ‘endgame’ in OSD&D – they could keep adventuring, if the DM agrees – but it is a definite option.  Moreover, other ‘end games’ are possible – e.g., BECM/RC D&D allows for the possibility of character becoming immortals!)

9.  Aesthetics: I love much of the art found in OSD&D rulebooks.  In particular, I am a huge fan of the work of Erol Otus and Dave Trampier.  With respect to the retro-clones, I find the art of Pete Mullen original and inspiring (Mullen’s work graces the covers of all of the Swords & Wizardry books).  In contrast, the ‘dungeon punk’ style of 3e always left me cold (why so many buckles and spikes?).  The art of the core 4e books definitely appeals to me more than the 3e style, but lacks the ‘otherworldly’ quality that I love about the work of Otus and Trampier.

There are some additional reasons why I like OSD&D far more than the recent and current versions of D&D (3e and 4e), but this should suffice for now.  It’s Guinness time!