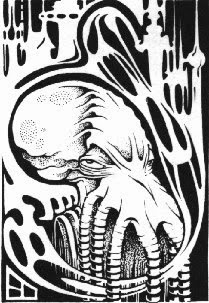 Witnessing unspeakable supernatural horrors – always a professional risk for any protagonist in a ‘swords and sorcery’ adventure – can drive a mortal man or woman mad.  Deliberately delving into ancient eldritch secrets for the purposes of unleashing unnatural forces or contacting demonic intelligences radically increases this risk.  Insane sorcerers and men whose minds have been broken by ancient evils are standard staples in ‘swords and sorcery’ tales.

(Note: This house rule will appear in a longer article in Knockspell # 3.)