Did you enjoy reading The Hobbit and The Lord of the Rings*? Do you love Professor Tolkien's world of Middle-earth? Does the thought of taking on a dreaded Nazgul with a sword forged by the Elven smiths of the Gwaith-i-Mirdain thrill you? Did you (or do you still) dig the RPG portrayed below? 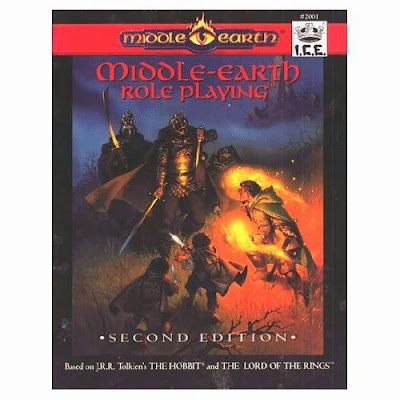 If so, you may be interested to learn that a new Middle-earth roleplaying game is being produced by Cubicle 7. Here is the official announcement (from here):

20 January 2010 - Cubicle 7 Entertainment and Sophisticated Games announce that they are developing The One Ring: The Lord of the Rings® Role-playing Game.

Cubicle 7 Entertainment and Sophisticated Games are proud to announce that they are jointly developing The One Ring: The Lord of the Rings® Role-playing Game.

“We’re tremendously excited about The One Ring,” said Dominic McDowall-Thomas, Cubicle 7 Director. “Our aim is to give our audience an authentic Middle-earth gaming experience, one that really captures the feel of Tolkien’s world.”

The designer and lead writer of this project, Francesco Nepitello, is a games industry veteran, best known for the hugely successful and critically acclaimed War of the Ring strategy board game, which he designed with The One Ring co-designer Marco Maggi and Roberto di Meglio. A recipient of the International Gamers Award, War of the Ring is recognised by many ‘Lord of the Rings’ enthusiasts and hobby gamers alike as one of the most engaging recreations of the world-renowned fantasy saga by J.R.R. Tolkien. Francesco and Marco are the designers of other immersive board game titles like Marvel Super Heroes and Age of Conan, but started their game-designing careers creating Lex Arcana, the most successful and popular fantasy role-playing game published in Italy.

Francesco has designed the new LOTR RPG game system to make sure that players are completely immersed in Middle-earth from the moment they begin creating their characters. As an experienced designer of games based on JRR Tolkien, as well as being a lifelong devotee of the Tolkien works, Francesco brings a dimension -and a depth- to this RPG which has probably never been seen before in a LOTR game.

Robert Hyde, head of Cambridge (UK) based Sophisticated Games said, “When we first acquired the rights from Tolkien Enterprises to publish this RPG - as part of our wider LOTR book based board game license- we had no hesitation in approaching Francesco to conceive a completely fresh LOTR and The Hobbit RPG, and for him to be the writer. We knew that he possessed both these skills and that the game would be in very safe hands. His presentation of Middle-earth, along with stunning artwork from John Howe and others, brings this incredibly evocative and exciting world to life.”

“We also approached Cubicle 7 to be our publishing partners on the new The One Ring RPG because we loved the quality of their previous publications and felt that Dominic and Angus (Abranson) had both the experience, and with the creation of Cubicle 7, the role playing game resources, to bring LOTR and The Hobbit to a very wide audience.”

For more information on The One Ring: The Lord of the Rings® Role-playing Game please contact Cubicle 7 oninfo@cubicle7.co.uk

The One Ring: The Lord of the Rings® Role-playing Game will be published in the second half of 2010.

I wish Cubicle 7 the best on this endeavour! I certainly hope that they produce a better game than Decipher's Lord of the Rings RPG, which was poorly edited and inadequately play-tested. Indeed, I found it almost impossible to figure out how to create a player character using the first printing of Decipher's core rulebook, and subsequently lost interest in it. It is clear now that Decipher was never really committed to the RPG, being interested primarily in using the license for their collectable card game. (Of course, Decipher's problems with embezzlement did not help it promote and sustain the game either.)
I love MERP and am a huge fan of most of the campaign modules that ICE produced for the game during its glory days of the 1980s and early 1990s. While incomplete, my collection of MERP campaign modules is one of my most cherished possessions. And, of course, Peter Fenlon's maps were simply stunning, works of art in their own right. MERP was the game that I most frequently ran during my 'salad days' of RPG'ing, during the mid-late 1980s.
Nonetheless, I have to concede that aspects of MERP's system -- most notably, its magic system -- are not very 'Tolkien-esque.' While I doubt that the good Professor ever developed a systematic conception of magic for Middle-earth, the magic system in MERP does not really resemble any description of magic in the Professor's various books. On this score, the Decipher game actually did a better job.
In any case, I hope that Cubicle 7 does justice to Middle-earth. I look forward to reading it, and possibly playing it, once it's published.
* Perceptive readers might notice that I did not mention The Silmarillion or the other post-humous works by Tolkien in the opening question. The reason is that the license for the game is from 'Tolkien Enterprises,' which only has the rights to The Hobbit and The Lord of the Rings (including, fortunately, the material in the LotR appendices). So, alas, nothing from The Silmarillion!
Posted by Akrasia