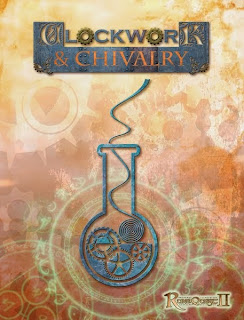 This new setting, ‘Clockwork & Chivalry’, from Cubicle 7 (for Mongoose’s RuneQuest II) looks cool. This thread at RPG.net is discussing the setting. Especially noteworthy is this comment from Newtus:

I'm brewing a longer review, but quite simply in my opinion Clockwork and Chivalry is the best British Fantasy setting since WHFRP 1st ed.

Its more fantastic than fantasy, there are no orcs, using the superstitions of the time as a basis for the magic in the game. It uses the MRQ2 framework to good effect, without being constrained by it. I could quite happily use this book with another game system. Looking forward to the campaign adventures popping up in print, since the introductory adventure adequately whets the appetite for more.

A must buy if you like historical games or are looking for a fantasy game that is different from your run of the mill orcs and dungeons fare.

Wow – that is high praise!

The website ‘Clockwork and Chivalry’ is devoted to the setting, in case you are curious to learn more.

I’ve always found the seventeenth century to be a fascinating era, and especially the events in England. The English Civil War(s), the Exclusion Crisis, the Glorious Revolution, and so forth, all had an enormous impact on the development of liberalism, especially in (what would become) Britain and her dominions (including the colonies that eventually would become the United States, as evidenced by the extent to which the Declaration of Independence and the U. S. Constitution draw upon – indeed, even plagiarise in places – John Locke’s Second Treatise on Government).

In addition to the political and religious conflicts that wracked England throughout the century, there also is the rise of modern science (Bacon, Boyle, Newton) and modern philosophy (Descartes, Hobbes, Locke). My fondness for this era should be evident from my choice of avatar: Thomas Hobbes, arguably the greatest English philosopher of all time.

The addition of alchemy and clockwork machinery to the era is intriguing. And even if I don’t eventually get to run a Clockwork & Chivalry game (though I hope to), merely reading the core book should be fun!