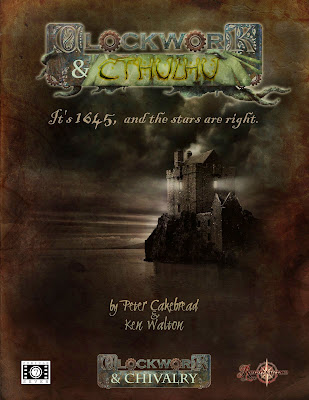 Horror Roleplaying in the world of Clockwork & Chivalry

“Then she did confesse that she gained her powers from a Devill which did come to her out of the baye on moonless nights. And upon examination, we did find the markes of evill upon her, for she bore scales like unto a fish about her bodie. And so was she hanged as a witche, and upon the scaffolde she did crie out “Ia! Ia! Cthulhu fhtagn!” and those who did witnesse this were sore afraide, but her Devill answered her not, and she did die in that place.”

England has descended into civil war. The earth is tainted by alchemical magick. Giant clockwork war machines lumber across the land. In the remote countryside, witches terrorise entire villages, while in the hallowed halls of great universities, natural philosophers uncover the secrets of nature.

War, plague and religious division make people’s lives a constant misery. But even greater threats exist. Witches whisper of the old gods. Royalist alchemists pore over John Dee’s forbidden translation of the Necronomicon, dreaming of powers that will allow them to win the war. Parliamentarian engineers consult with creatures from beyond the crystal spheres and build blasphemous mechanisms, unholy monuments to their alien overlords. Vast inter-dimensional beings seek entry into the world, while their human servants, corrupted, crazed and enslaved, follow the eldritch agendas of their hidden masters.

Clockwork & Cthulhu brings the horror of H.P. Lovecraft’s Cthulhu Mythos to the 17th century alternate historical fantasy world of Clockwork & Chivalry. Inside you will find:

· New rules for Mental Damage in the Renaissance system.

· Three complete scenarios which take the Adventurers into the rain-shrouded Coniston Fells, the shifting sands of Morecambe Bay, and the corridors of the Royalist court at Oxford.

I've been intrigued with Clockwork & Chivalry for well over a year now, as it was, in my opinion, the most novel setting produced for the (short-lived) RuneQuest 2. And my fondness for Call of Cthulhu is longstanding.
So once I get my hands on this book and the second edition of Clockwork & Chivalry (which employs the Renaissance system, which, in turn, is based upon OpenQuest), I plan to inflict some 1645 eldritch horror upon my players!
Posted by Akrasia