Why AD&D now? How to play online?

So, I just posted some house-rules for AD&D/OSRIC here!

Why did I do this, given my ongoing focus on various d100 games -- namely, RuneQuest 6, OpenQuest 2, Call of Cthulhu, Renaissance, Magic World, etc. -- my house rules for Swords and Wizardry, and my contributions to Crypts and Things?  Why go to AD&D now (albeit it with some tweaks to the rules that, no doubt, would infuriate certain kinds of grognards)?

Well, I haven't lost any of my enthusiasm for those other games.  Quite the contrary!  I would love to get a RQ6 or CoC campaign (or 'Dark Streets' or...) campaign up and running in the near future.

However, I'm trying to start up an online campaign with a couple of old friends, and we agreed (for reasons of unabashed nostalgia) to play some AD&D.  This would give me a chance to run some classic AD&D modules, ones that I either haven't run in decades (the wonderful U1-3 series), or that I have never run, but have long wanted to (e.g., UK4).

And I chose the Moonshae region of the Forgotten Realms (the 1st edition version, of course!) as the setting, because I rather like the 'Vikings-versus-Celts' feel of the place.  Essentially, the Moonshae Islands are a fantasy version of 10th Century Ireland and Scotland.  The region reminds me a bit of Jack Vance's Lyonnesse -- or at least that is how I interpret it.  And since I recently played through the classic CRPGs Icewind Dale and Baldur's Gate (I'm old school even when it comes to my computer games!), I have been reminded of the main elements of the Forgotten Realms world.  (I'm ambivalent about the Forgotten Realms overall, but there are parts that I quite like.) 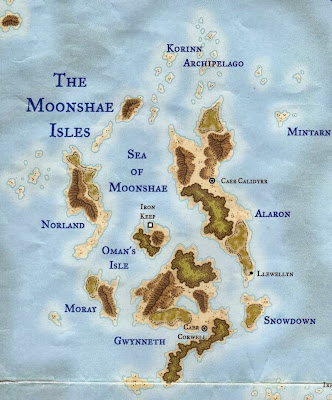 Since I'm trying to run this game online, and have never done anything like this before, I'd be grateful for any tips that you gentle readers might have.  I've looked at Roll20, and it strikes me pretty good, though I have yet to try it out.  Do others recommend it?