The Old School Renaissance and 5e Dungeons and Dragons 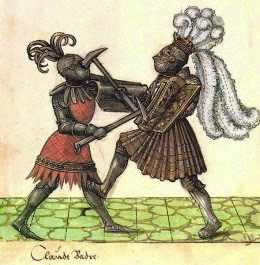 There is a somewhat amusing debate underway at the RPG site over whether the OSR and 5th edition Dungeons and Dragons are (or should be, or likely will be) ‘friends’ or ‘enemies.’  (The OSR, as most readers of this blog no doubt are aware, refers to the ‘Old School Renaissance,’ which, for the purposes of this discussion at least, refers primarily to adherents of TSR-era Dungeons and Dragons and Advanced Dungeons and Dragons, and their related ‘retro-clones’ and ‘near-clones,’ including the magnificent Crypts and Things.)

Having run one session of 5th edition D&D (using the Starter Set), and having looked a bit at the Players’ Handbook and the online Basic Rules, it is clear that D&D 5e is not an ‘old school’ game.  It simply has too many ‘new school’ elements for it to be that (such as ‘at will’ cantrips, full recovery of hit points with every ‘full rest,’ and so forth).

Nor do I think that it ever was intended to be an ‘old school’ game.  Rather, it was designed to be as ecumenical as possible.  Usually such efforts turn out to be horrible, in my experience, since in trying to please everyone the product in question ends up pleasing no one.  But in this case it seems that one can run D&D 5e in an more-or-less ‘old school style’ without too much difficulty – something that was not easy to do with 3e D&D in my experience (and, I gather, simply impossible with 4e).

Moreover, there is no reason why a 5e game cannot borrow elements and ideas from older editions and existing OSR games and settings, and vice versa.  At the very least, it looks quite feasible to run, say, a 1st edition AD&D module using the 5e rules without too much conversion work.  Both games belong to the same genus.

From an ‘old school perspective,’ so to speak, I would say that 5e D&D resembles Castles and Crusades (a game that, years ago, I found to be a refreshing change from 3e) more than anything else on the market these days.  Like C&C, it can be run in an ‘old school’ way, and clearly draws much of its inspiration from classic D&D and AD&D.  Yet it also includes a number of ‘innovations’ and employs a more unified underlying structure.  Indeed, if I wanted a pithy way to describe (how I would run) 5e D&D, I would say that it is a superior version of C&C.

So D&D 5e and the OSR should be friends – or at least peaceful neighbours – and not enemies.