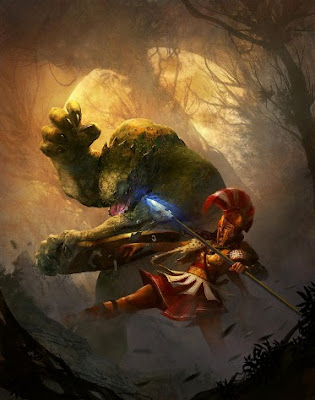 I’m a bit late in reporting on this, but the good people at the Design Mechanism have been producing monthly adventures for their superb Mythras role-playing game (formerly RuneQuest 6). This strikes me as a great thing to do for any game, but especially a rather ‘crunchy’ one like Mythras. This kind of regular support helps people try Mythras—including different variants and settings—without too much work or cost. I’ve already obtained two of the adventures, and look forward seeing more.

One adventure in particular warrants special mention. It’s called The Colour of Madness, and has a very strong ‘swords-and-sorcery’ flavour—with a distinctly ‘Moorcockian’ accent. This is no coincidence, as an earlier version of the adventure was written by Lawrence Whitaker for the ‘Young Kingdoms’ fantasy setting. (Whitaker wrote Mongoose’s MRQII-based Elric of Melniboné line; he also wrote a lot of material for Chaosium’s Stormbringer and Elric! games back in the day.) If you own (or can track down) Whitaker’s Elric books for Mongoose RuneQuest II, especially the core book and the Cities of the South supplement, then this module will help you run a rather cool Young Kingdoms campaign with Mythras. (For a sense of what such a campaign might be like, check out this—sadly not-yet-finished—campaign log. I believe that one possibility for that campaign was the Colour of Madness adventure, but our characters decided to flee, er… travel to the East instead…)

Since I’m writing about my favourite fantasy d100 games in this post, I should also mention that D101 Games has updated OpenQuest. The ‘new’ version (really a fixed up and mildly improved version of the 2nd edition) is called OpenQuest Refreshed. It features a nice cover by the talented Jon Hodgson: 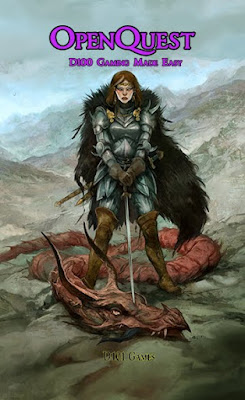 OQ author Newt Newport summarizes the main changes in this blog post. If you want a fantasy BRP/d100 system that is somewhat lighter than Mythras, I highly recommend OpenQuest as the way to go!