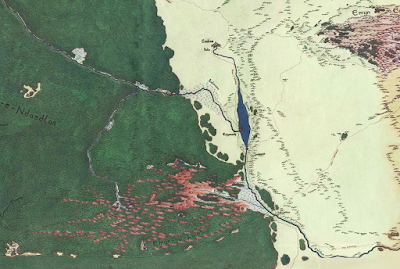 Over the course of several days, Hengil (Dúnedan Warden), Ulvmund Galmund (Barding Warrior), and Hartmut Hare-Eye (Beorning Wanderer), separately arrive in Esgaroth. They learn that notices of jobs for ‘mercenaries’, ‘adventurers’, and the like can be found in the Adventurers’ Hall within the Town-Hall Quarter.

Hengil, Ulvmund, and Hartmut all read the following notice within the Adventurers’ Hall:


“Wanted: Help for the village Ulgarstat near the great wood! Gold reward! Those with strong swords, hunters’ eyes, and valiant hearts are to inquire at The Golden Gull on Bridge Street.”

That evening the three men go to The Golden Gull, where the innkeeper—a great bear of a man named ‘Baldur Baldurson’—directs them to a table in a secluded corner of the common room. At the table are two emissaries from Ulgarstat: a fair-haired young man named ‘Guntar Resticsard’ and his friend, the tall and dark ‘Aecstan’. Introductions are made—the adventurers learn something of each other and their backgrounds.

Guntar explains that he is the son of Ulgar Resticsard, the founder and leader of the village Ulgarstat. (Ulgarstat was settled on a strip of rich farmland at the very edge of Mirkwood, amidst some smaller forests, about a decade ago. It is roughly a day’s march from Lake-town.) His reason for wanting to hire some adventurers is that a number of people have gone missing around the village in recent months. Two months ago a farmer who lived nearby, to the north of the village, disappeared en route Ulgastat. Three weeks later, a peddler left Ulgarstat, announcing his plan to visit the farm of ‘Wessun Fraelsen’ to the north. The peddler never arrived. Ulgar and Wessun tracked the peddler as far as they could along the wooded trail between Ulgarstat and Wessun’s farm. Wagon tracks led halfway up the trail, and then disappeared into the forest. The two men found the wagon, but though they searched the woods around it, they could find no other signs of horse or peddler. Two weeks later, three young men went game hunting up the northern trail. When they didn’t return for supper, their fathers and brothers went after them. No trace of any of the three was found. 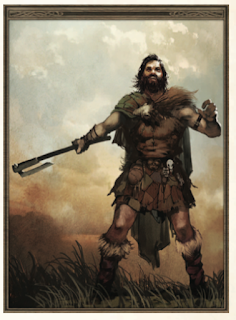 Aecstan claims that it is likely wolves that are causing the disappearances. Wolves had attacked the village twice in the past year. In response, six months ago a wooden palisade was built around Ulgarstat. To this claim Guntar remarks that while this may be the case, no bodies have been found…

The following day the party travels to Ulgarstat with Guntar and Aecstan. It is a short, uneventful journey, and they reach the hamlet in the early evening. At Ulgarstat, the company learns from Ulgar Retiscard (the leader of Ulgarstat) and his friend the farmer Wessun Fraelsen, of the recent disappearance of Runnal Retiscard (1st son of Ulgar) and Currael (oldest daughter of Wessun).  The party’s mission is now urgent!

Early the next morning the company—along with Ulgar, Wesson, Guntar, and Aecstan—follow the trail north toward the Fraelsen farm. The group soon reaches the site where the peddler’s wagon was found a few weeks ago. No tracks are found, but sharp-eyed Hartmut spots some webbing high in the trees, glistening in the sunlight.

Leaving the villagers behind, the trio of heroes follows the silky strands deeper into the forest. As the green canopy above them casts the company into twilight, they discover a region covered in thick webs. It is a ‘web fortress’—thick webs drape a line of trees, creating a malevolent mound. Ulvmund and Hartmut react to the sight with profound horror [they gain a shadow point each]. 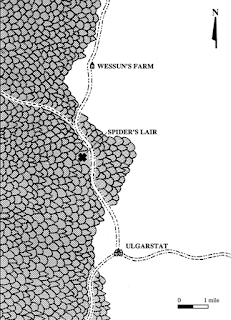 [Map of the area around Ulgarstat]

Recovering from his unmanly fright, Ulvmund sneaks around the mound. While doing so, he hears creatures muttering and moving. He also notices a rotting hollow log that seems to penetrate the web mound—it provides a web-free ‘tunnel’ through the morass of sticky strands. 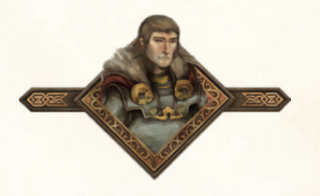 The company deliberates what to do next. But their conference is interrupted when two hideous spiders the size of large wolves attack! Hartmut and Hengil are paralyzed by the spiders’ poison. Fortunately, the Valar smile upon the companions as Ulmund slays one spider, and the other flees. Hengil recovers from his bite, while Ulvmund manages to draw the poison out of Hartmut.

Deciding to act before another ambush, Hengel crawls through the rotting hollow log, followed by Hartmut and Ulvmund. A dimly lit hollow is revealed. Two more great spiders drop from the ceiling of webs! But Hengil speaks words of encouragement to his companions [‘Gift of the Warden’ is granted to Ulvmund and Hartmut]. Hearts filled with valour, the fight progresses well, and the spiders are slain by Ulvmund and Hartmut. 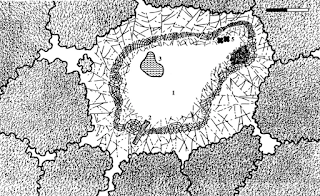 [Map of the Spider Mound]

The companions search the interior of the foul mound. They find cocoons hanging from a tree in the northeast corner. Within the cocoons Runnal and Currael are found—damaged but alive!

Also discovered: a stone pedestal on which is mounted a jet-black orb. On the orb is written something in Quenya. Alas, none of the heroes can read the High Elvish tongue. Hengil takes the orb—and immediately feels nauseated by its malignant aura [suffers corruption]. The party also finds a small locked chest amidst the rubbish and rotting corpses that litter the floor of the spider mound. 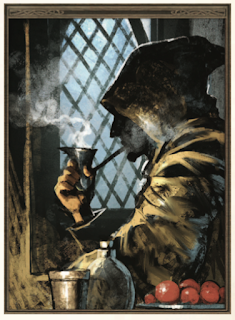 Having rescued the missing villagers, the party rejoins Ulgar, Wesson, Guntar, and Aecstan. The group of nine promptly returns to Ulgarstat. There, the company is rewarded with some gold coins. Ulgar also writes a letter of recommendation for the party.

Thrilled by their first success at adventuring, Hengil, Hartmut, and Ulvmund return to Esgaroth. There they celebrate and make grand plans for the future. Still, the black orb disturbs their thoughts…