As I’ve mentioned a few times here, I’m really looking forward to the forthcoming Mythras-based Lyonesse FRPG from the Design Mechanism. While the FRPG likely will not appear this year, there now is a ready-to-run Lyonesse adventure available: Coddefut’s Stipule. It can be run using the core Mythras rules (or the freely available Mythras Imperative). 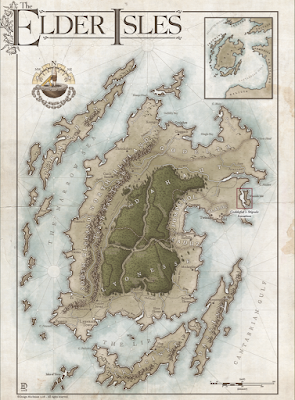 
What is afoot in Silkspindle Tower?
A small town on the Dahaut coast has a distinct problem: its fishermen are going missing, vanishing from the seas with their boats and catches, never to be seen again. People are scared; could this have something to do with the wizard Coddefut who once lived in the tower? Never! He disappeared 20 years before, so perhaps this is mere coincidence.
But Moribund, the devious burghermeister of the town, sees this as an opportunity. There are several individuals in the community who are especially vexatious to him, and this is a chance to prove that he, Moribund, is not a man to be vexed. Thus, these persons of interest have been gathered together and ordered, as a matter of civic duty, to venture out onto Coddefut's abandoned island, and investigate.
Coddefut's Stipule offers an introduction to the incredible world of Lyonesse, as described in Jack Vance's acclaimed fantasy trilogy: 'Suldrun's Garden', 'The Green Pearl', and 'Madouc'. The adventure is also a taster for the Lyonesse roleplaying game being produced by The Design Mechanism, and gives a sneak peak at some of the wonderful rules and magic the game will include to simulate Jack Vance's inimitable style.
Complete with 6 pregenerated characters, Coddefut's Stipule is fully compatible with the Mythras (and Mythras Imperative) rules, and is ready for play.

I’ve skimmed the adventure and it looks very good. The beginning is something of a ‘railroad’, but that’s fine for a ‘one shot’ (it could be reworked for a proper campaign). The pregenerated PCs are all quite distinctive and colourful, exactly the kinds of protagonists one would expect in a story by Vance. The 'Vancian charts' for town names, inn/tavern names, landlords, and meals are great, as are the sample fairy spells. Overall the adventure has a pungent Vancian flavour!