The Lyonesse role-playing game is now available! The system is based upon Mythras, adapted to Jack Vance’s classic fantasy setting. 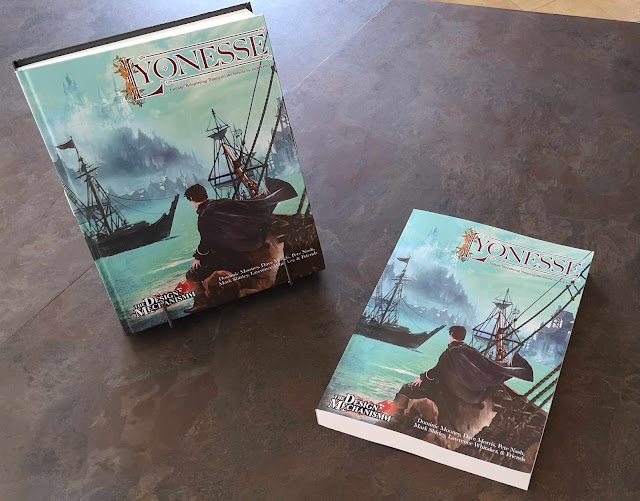 I’ve mentioned this book a number of times before in this blog. It combines one of my favourite role-playing systems (Mythras) with one my favourite fantasy settings (Vance’s ‘Elder Isles’) –- so it’s pretty much the ‘Reese’s Cup’ game for me. I’m really looking forward to digging into it over the summer.


We're delighted to announce that Lyonesse, the roleplaying game based on Jack Vance's award-winning trilogy (Suldrun's Garden, The Green Pearl, and Madouc) is available to buy from our DrivethruRPG store in Print+PDF versions.

We're offering the game in hardcover and softcover formats. The softcover is slightly cheaper than the hardcover (and yes the prices really are meant to be that close - one of the quirks of POD publishing), and both formats are Print On Demand, largely because in these uncertain times, we do not know how long it will take our regular printer to get back to normal operations, and our distributor, Alliance, is still closed for business.

Based on the award winning fantasy trilogy by one of Science Fiction and Fantasy's greatest wordsmiths, Lyonesse transports you to the Elder Isles, where King Casmir plots to seize control of the Ten Kingdoms, assassinate his foes, and prevent a disturbing prophecy from being fulfilled. Elsewhere, the magicians Shimrod, Murgen, and Tamurello are locked in a private battle of wit, will and magical intrigue. All the while, the brutal, disdainful Ska are drawing their own plans of conquest.
And in the immense Forest of Tantrevalles, the secretive fairies watch all that happens with wry amusement, and occasionally meddle in mortal affairs for reasons of their own.

Players in Lyonesse take on the roles of adventurers of the Elder Isles, seeking fame, glory, profit, magic, or simply the promise of a good meal and a soft bed for the night. Characters can be mercenaries or spies in the service of one (or several) kingdoms; oath-sworn knights eager to do battle with their lord's enemies; thieves, tricksters or even honest merchants, out to make a just living (sometimes). Perhaps characters are aspiring magicians, keen to emulate the likes of Shimrod, Tamurello, or even the mighty Murgen himself.

Lyonesse is a complete roleplaying game. This book contains everything needed (except dice and friends) for creating fabulous adventures in the Elder Isles. Exhaustive information on the kingdoms and lands of the islands; full rules for characters, skills, combat, magic, and monsters.

Great care has been taken to recreate the style and atmosphere of Jack Vance's novels, so that Games Masters and Players can fully immerse themselves in the Lyonesse setting. Special rules for creating towns, taverns, tavernkeeper, and even lovingly described meals are all included, emulating the quintessential elements of the books.

Don your armour! Take up your weapons! Sharpen your wits! Get ready for adventure across Hybras and beyond!

And here is a recent review of the game at RPG.net.

During these dark times, I’m so happy that this is now available. Praise Lucanor!