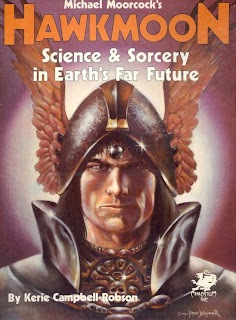 Last week, James Maliszewski of 'Grognardia' fame posted a 'retrospective' on the Hawkmoon RPG (published by Chaosium in 1986). Since I've been thinking about BRP (and BRP-related games, such as RuneQuest and OpenQuest) quite a bit lately, I thought that I would share a few of my own thoughts on the game and its setting.
I ran a Hawkmoon campaign during the summer of 1989, and found it to be an eminently enjoyable experience. It was the final role-playing campaign that I ever ran for my 'high-school' group (I already had completed my first year of university, as I went a year earlier than most of my peers, but the rest of the group had just finished up high-school). Consequently, my recollection of the campaign is tinged with a bit of nostalgia. It also was the first BRP campaign that I ever ran (although I had been a player in a few sessions of Call of Cthulhu before the summer of '89). And since the Cold War was still going strong -- nobody was expecting the Eastern Bloc to crumble in only a few months -- the post-apocalyptic setting resonated with us and our fears of imminent nuclear holocaust (we were sensitive souls, alas).
I had planned to run the Shattered Isle campaign, which is the only supplement published by Chaosium for Hawkmoon. Instead, I simply ran the scenario included with the core rules, and a few homemade scenarios. Nothing about them strike me as especially inspired in retrospect, but the unique combination of magic and science gave them a distinctive flavour. Indeed, because of the setting's unconventional nature ('science fantasy'), and its familiar 'real world' references (far-future Europe), Hawkmoon was a refreshing change from the Middle-earth campaigns that I had run throughout most of the late 1980s (using ICE's MERP system, of course).

I still own the game, and think about running it again, from time to time. Having lived in Ireland for three years (2005-2008), I would especially be interested in running The Shattered Isle, as it pits Hibernian rebels against the oppressive forces of the malevolent Granbretan Empire (of course, there's more to it than that!). It would be fun to draw on my real life knowledge of the isle (and photographs) to run such a fantasy campaign.

As for Moorcock's character 'Hawkmoon,' I find him to be rather shallow and uninteresting. Instead, I much prefer Corum. Indeed, I find the Corum tales to be superior to those featuring either Elric or Hawkmoon (especially compelling, in my judgement, is the way in which Moorcock draws on Celtic mythology in the second Corum trilogy). Nonetheless, the 'Tragic Millennium' is a great setting: it is familiar yet exotic, and provides ample opportunity for adventure. Moreover, unlike the 'Young Kingdoms,' the players can adventure in the world of Hawkmoon without the knowledge that the whole place is going to be destroyed in a few years hanging over them! Indeed, this difference was the main reason why I picked up Hawkmoon instead of Stormbringer 22 years ago.
Posted by Akrasia