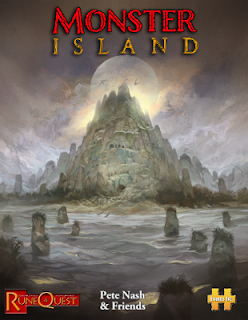 Over at the Design Mechanism website Lawrence Whitaker posted this interesting announcement:

As we hurtle towards Christmas, I'd like to begin by thanking everyone who's shown us support during the past 18 months or so, since Design Mechanism began and we announced our revival of RuneQuest. Your support and custom has enabled us to produce two books for early 2013 release and confidently build on our promise to make RQ - and Design Mechanism - a growing system and company. Its great to have your confidence here on this forum and in the wider community.
So, now to the news. If you can't wait for the Big Reveal, scroll down now. Otherwise, here's where we are.

Monster Island
Cover art is with us, Russ Nicholson and others have provided illustrations, and Pete continues to refine the text (with a tiny bit of input from me). The book is getting ready for editing, and Colin Driver is hard at work on the maps.

We're going to make 'Monster Island' something special. It deserves it. Pete's worked hard to create a really evocative, fun, setting/sourcebook/creature digest and he's more than succeeded. We're looking at 256 pages filled with scenario ideas, scenario cameos, a full setting to be dropped (literally) into any ocean in any campaign world, and more monsters than you can shake a spear at. To this end, we're going to include a full-colour, pull-out map of the island with the book, probably in A3 or A2 size, and done by our good friend Colin, the genius cartographer behind the bulk of the maps in Moon Design's 'Guide to Glorantha'.

Monster Island really does take its cues from Chaosium's masterful 'Griffin Mountain'. Its a living, breathing place populated by bizarre and interesting fauna and flora that will provide months of great
adventuring. Its the kind of place GMs can strand their characters upon, and structure an entire campaign around their survival and escape. Its a place where you can play one of the different indigenous races and treat it as home - to be explored and endured. Its the sort of place that some dastardly sorcerer like Kratos or Jedakiah (see Book of Quests) will send characters to, in return for money or secrets (or maybe as punishment), so they can quest for the rare and precious items that will fuel their sorcerous schemes.

Its going to be a great book.

Book of Quests
This compendium of seven scenarios is completing editing and now into layout. All the art is in, and I'll be previewing the cover in the next couple of weeks. All the scenarios in BoQ are penned by relatively new authors who worked to a light brief provided by me. The idea is to offer a loosely detailed region where the adventures take place, but keep the scenarios as flexible as possible so they can be used in any fantasy world. The writers have done an excellent job of taking my rough ideas and making them into a series of terrific, exciting scenarios. There's something for everyone: a caravan guarding job that turns horrific; a city-based intrigue concerning a tragic countess; a rescue mission into a murky swamp; an investigation into shady dealings in the king's court; a race to find an ancient artefact of dreadful power; a quest into the remote mountains to thwart an evil plot; and a showdown with the nefarious sorcerer, Jedakiah, at his mountain lair. Each scenario can be played standalone, or the whole lot forms a complete campaign. Couple this book with Monster Island and you have years of adventuring.

It'll be about 200 pages and, once again, Colin Driver has done all the maps and floorplans - and in a splendid style too.

Hardcover Kickstarter
In 2013 we will launch a Kickstarter or Indiegogo project to produce the core rules and, depending on stretch goals attained, Monster Island and Book of Quests, published in hard cover. We're looking to produce the very best hardcover we can - dustjacket, bookmark, stitch casement... its not cheap to do, and we also want to offer the book at a reasonable cost. More on this in January next year.

Mythics
During 2013 Pete and I will be working on Mythics Greece and Briton respectively. I've already started my Briton research and notes. These will not be straight historical books, but will contain magic and heroics too. Of course, we'll produce the books in such as way that magic can either a) be dispensed with or b) treated as vague superstition that may or may not work, depending on your point of view.
We will also be commissioning Michael O'Brien (Sun County, River of Cradles and Mister Maximum Game Fun) to write Mythic Constantinople. This is a pet project for Mike and knowing his approach to game writing, it will be worth waiting for.

And now the reveals...

Age of Treason: Shores of Korantia
We're delighted to announce that Design Mechanism will be publishing Jonathan Drake's superb Age of Treason setting for RuneQuest 6. Jon is writing a completely new core book, focused on a different region, Korantia, which we will be releasing late summer 2013. Those of you familiar with the first Age of Treason book, focusing on the Taskan Empire, will know what a great and original world Jon has created. The Korantia sourcebook follows in this vein but is a completely new area with new gods, magic, cultures and adventures . We heartily welcome Jon aboard the Design Mechanism galley (and he's already working out where, in the nearby ocean, Monster Island fits)...

Luther Arkwright
Design Mechanism has licensed the exclusive rights to produce a brand new version of Bryan Talbot’s acclaimed graphic novel series ‘The Adventures of Luther Arkwright’. For those unfamiliar with the character, Luther Arkwright is a trans-dimensional troubleshooter working for WOTAN, the agency that monitors the myriad parallel worlds of the multiverse. The first graphic novel series focuses on the attempts by the sinister Disruptors to unleash the Firefrost weapon and so cause widespread destruction and chaos across the parallels. Luther, working in a variant Earth where Cromwell’s descendants still hold power, goes to extraordinary lengths to thwart the Disruptors’ plans. An excellent overview of the Luther Arkwright saga can be found at:
http://en.wikipedia.org/wiki/Luther_ArkwrightAnd Bryan’s own site at: http://www.bryan-talbot.com/arkwright/

‘Luther Arkwright: Roleplaying Across the Parallels’ will see Bryan’s iconic character and setting powered by the RuneQuest 6 rules. The game will focus on WOTAN’s attempts to police the multiverse and prevent the Disruptors’ (and others’) schemes. Characters will each have a unique ability that has brought them to WOTAN’s attention, including psionics, mysticism and other talents of the kind found in the Arkwright multiverse. The game takes RQ in a new direction: rules for the modern era, along with mechanics for Steampunk concepts, travel between parallels, and even maintaining the same character across multiple worlds, will be included.

The game will be written by myself and Pete, collaborating with Bryan: indeed, some work has already started. Arkwright is a perfect background for RuneQuest Science Fantasy/Steam Punk/Fin de Siècle adventuring. Some of you may recall that 23rd Parallel Games produced the first Arkwright RPG in the 1990s and that, too, used a d100 resolution mechanic. This, though, will be an entirely new game. We intend to support the setting with Parallel books, detailing a particular variant Earth complete with a set of scenarios or campaign arcs included.

Bryan had this to say: “2014 is the 36th anniversary of the beginning of the original serialization of The Adventures of Luther Arkwright graphic novel, and it's never been out of print since then. In the summer, Dark Horse books are releasing a large format, hardback prestige edition of the book, which will also include the sequel, Heart of Empire, an extensive illustration gallery and a ten page interview. It's so very cool that this brand new Luther Arkwright role playing game is being published in this same year. I'm very excited about the project".

At this stage, its too early to predict page count, but its likely to be 256 pages. It won’t be a standalone game; you will need the RuneQuest rules, but it will be a complete treatment of the Arkwright multiverse so you can expect a lot of depth, new rules, and new concepts.

As you can imagine, we’re very excited about this project. Pete and I are long-time Arkwright fans and, with our deep love and affection for multiverse-spanning concepts, eternal champions, and the whole Fin de Siècle vibe, this is a perfect setting for us. We’re very much looking forward to starting the work proper and getting the Luther Arkwright game finished for the end of 2013.

This line-up looks very promising!  I’m especially interested in The Book of Quests, Monster Island (which includes some Russ Nicholson art!), Mythic Briton, Mythic Greece, and the hardcover version of RQ6, although I certainly will check out the other products as well.

Plus, RQ’s younger cousin, OpenQuest 2, will be published in colour…