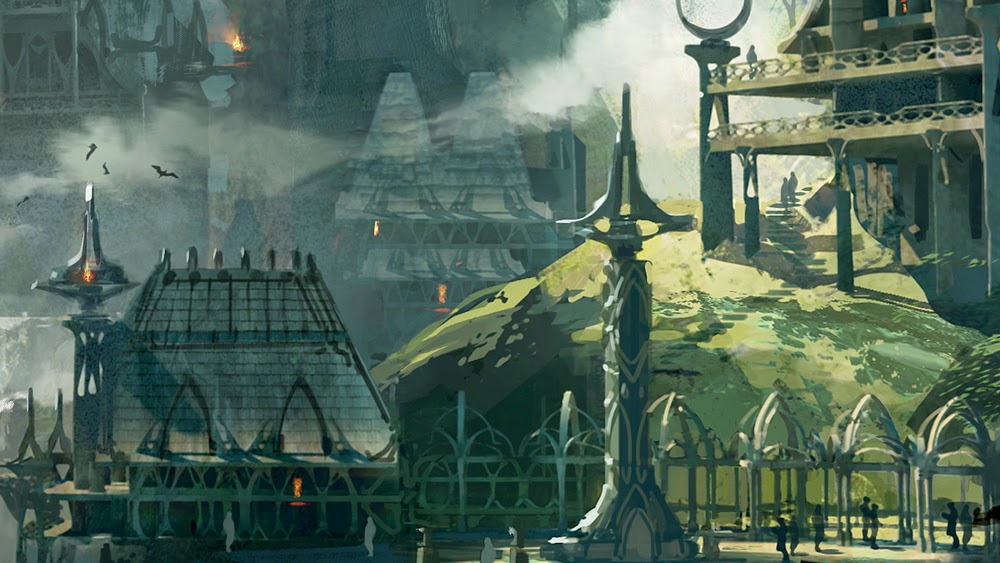 Here is a preview of some of the art that will be in the 5th edition D&D Players Handbook.  It also includes the pages from that book that present the ‘Warlock’ class.

Overall, I think that the art is solid.  I love the scene of the wood elf forest city.  I dislike the pictures of the two wizards, both of whom are striking rather silly ‘action poses.’  The other pictures are fine, in my view, and have the virtue of portraying adventure scenes rather than adventurer poses.

On balance, based on what I’ve seen so far, I like the art for 5e a lot more than that of 3e (and, based on my limited exposure, 4e).  I never cared for the ‘dungeon punk’ look that was introduced with 3e, so I’m glad to see that it has been purged, for the most part, in the new edition.

The Warlock class looks interesting, but I’m puzzled as to why it is an ‘arcane’ spell casting class as opposed to a ‘divine’ class, given that it receives its powers via a ‘pact’ with a ‘higher-power.’  Nonetheless, the Warlock seems quite flavourful.

At some point (hopefully this summer) I’ll sit down and read through the Starter Set and the free Basic Rules in order to arrive at a judgement concerning 5e.  However, based on the snippets that I’ve read so far, I think that I like it much more than I ever did 3e (and 4e, of course, is simply beyond the Pale).