Initial Impression of Adventures in Middle-earth 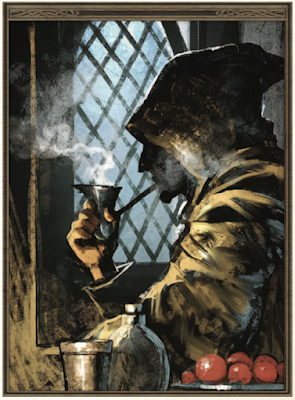 A while back I mentioned that Cubicle 7 was producing a Middle-earth supplement for Dungeons and Dragons 5th edition (“Can Gandalf be a 5th edition D&D magic-user?”). Well the PDF of that supplement is out now. It’s called Adventures in Middle-earth. I have it, and after spending a few hours going through much of it, I have to say that I think that it looks quite promising. It does a solid job of adapting the 5e rules to Tolkien’s world, something about which I had been somewhat sceptical.

Cubicle 7 provides a general overview here, and a preview is available here.

The game is firmly set in post-Hobbit northern Middle-earth. The starting date is 2946 of the Third Age, five years after death of Smaug and the Battle of the Five Armies. The maps and cultures focus on the ‘Wilderland’ (roughly, Mirkwood and its surrounding territories).

There are eleven ‘cultures’ available to player characters. (These cultures replace standard D&D ‘races’.) They are: Bardings (those people from Lake-town who followed Bard to re-establish the city of Dale), Beornings (the hairy followers of Beorn), Dúnedain (the ‘Rangers’ of Eriador, that is, the surviving ‘High Men’ remnants of the lost kingdom of Arnor), Dwarves of the Lonely Mountain, Elves of Mirkwood, Hobbits of the Shire, Men of Bree, Men of the Lake (the townsfolk of Esgaroth, now largely recovered from Smaug’s attack), Men of Minas Tirith (Gondorians), Riders of Rohan, and Woodmen of Wilderland. So seven of the eleven cultures are from the Wilderland. This is mildly annoying, as simply adding a few more cultures – say, Elves of Rivendell and Lothlórien, Dwarves of the Blue Mountains, and another Gondorian culture or two (perhaps Men of Dol Amroth and Pelargir, the other two main cities of Gondor in the late Third Age) – would have covered most of the PC-worthy cultures of north-western Middle-earth. Ah well, this is obviously a minor irritation.

There are six new classes. They are (with options in parentheses): Scholar (master healer, master scholar); Slayer (rider, foe-hammer); Treasure Hunter (agent, burglar); Wanderer (hunter of beasts, hunter of shadows); Warden (counselor, herald, bounder); and Warrior (knight, weaponmaster). The classes strike me as quite flavourful and appropriate for Middle-earth. 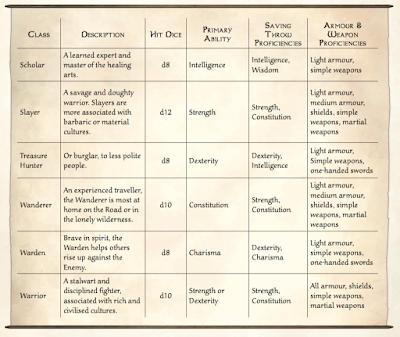 You may notice that there are no traditional spell-casting classes! While there are some (quite limited) magical abilities available to characters in the form of ‘virtues’ (cultural feats, such as ‘Wood-Elf Magic’ or the Dwarves’ ‘Broken Spells’), or higher-level class abilities (such as the Scholar’s 17th level ability ‘Words Unspoken’ and 18th level ability ‘Words of Command’), none of the classes can prepare and cast spells in the manner of D&D clerics and wizards. The authors note that you can add such classes (or any other D&D class for that matter) if you think that they fit into your vision of Middle-earth, but they did not want to include them amongst the ‘core’ set. This strikes me as the right approach. While there are characters within Middle-earth who have magical abilities (both ‘goodly’ individuals like Malbeth the Seer, and certain other Dúnedain, as well as the dark sorceries practiced by likes of the Mouth of Sauron and other ‘black’ Númenóreans), the D&D magic system is generally a rather inappropriate way of modeling them.

The backgrounds are rather flavourful as well, and help explain the characters’ goals and motivations. They include: loyal servant, doomed to die, driven from home, emissary of your people, fallen scion, the harrowed, hunted by the shadow, lure of the road, the magician, oathsworn, reluctant adventurer, seeker of the lost, and world weary. Each background gains two skill proficiencies (so ‘loyal servant’ gets ‘insight’ and ‘tradition’, whereas ‘the magician’ gets ‘performance’ and ‘sleight of hand’) and a special feature (e.g., ‘doomed to die’ has the feature of ‘dark foreboding’). Players also should select a ‘distinctive quality,’ ‘specialty,’ ‘hope,’ and ‘despair’ for their characters based upon their backgrounds. I really loved this section. It shows how D&D 5e backgrounds can be shaped to immerse characters within the ethos of the setting.

The equipment section covers coinage, trading and bartering, and the world’s different standards of living (e.g., ‘martial’ and ‘prosperous’), which are determined by characters’ cultures. Also covered are weapons, armour, and special culture-specific items (like ‘Dalish fireworks, ‘Dwarven toys,’ pipeweed, etc.). The discussion of herbs, potions, and salves is brief but very good – and quite ‘Middle-earth-ish’ in flavour. Finally, a number of colourful ‘cultural heirlooms’ are presented – such as ‘Dalish Longbow’ and ‘Axe of Azanulbizar’ – that characters can gain if they take the ‘Cultural Heirloom virtue’ or (rarely) find them as treasure during their adventures.

I haven’t gotten to the rules for journeys, the Shadow, the Fellowship phase, and so forth yet, but my quick skim of them has me rather excited. I think that this is going to be a fun game to play! I am looking forward to checking out further books in this line.

Indeed, I’ve already started digging though my old MERP collection, thinking about what materials to convert, what campaigns to run…

For a more complete overview and review, see this post by Rob Conley at his ‘Bat in the Attic’ blog.

Oh yeah, I should mention that the book is beautiful in terms of art and layout! 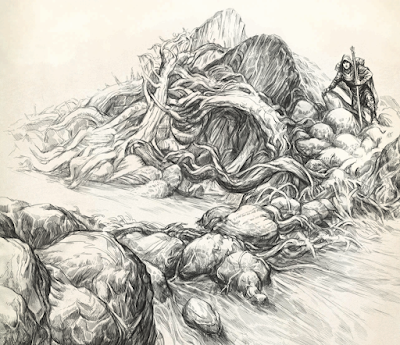