The ultra-cool dwarf and the seven planets

Okay, this is (apologies in advance) ultra-cool:


Astronomers have found at least seven Earth-sized planets orbiting the same star 40 light-years away ...
The seven exoplanets were all found in tight formation around an ultracool dwarf star called TRAPPIST-1. Estimates of their mass also indicate that they are rocky planets, rather than being gaseous like Jupiter. Three planets are in the habitable zone of the star, known as TRAPPIST-1e, f and g, and may even have oceans on the surface. 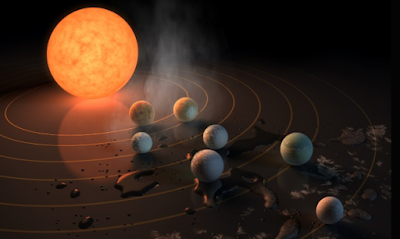 For a 'hard' (or 'hard-ish') science fiction setting -- one in which there is no faster-than-light travel -- a single solar system with 3 life-supporting planets (and four other earth-sized ones, capable of being settled) sounds ideal.

The only downside to this discovery is that it makes me worry (once again!) about Fermi's paradox. (Alastair Reynolds's "Revelation Space" novels provide a cool -- but quite disturbing -- explanation for Fermi's paradox. Well worth reading, if you haven't checked them out yet!)
Posted by Akrasia