Eye of Vecna coming to the big screen?

The possibility of new Dungeons and Dragons film has popped up from time to time for years now (I last mentioned it here in February 2016). But it now looks like a new D&D film will be released in the summer of 2021. Interestingly, according to this report at ComicBook-dot-com, it will feature the infamous artifact 'The Eye of Vecna':

"ComicBook.com can exclusively report that the upcoming Dungeons & Dragons movie currently in development by Paramount will focus on a group of adventurers looking for the Eye of Vecna, a powerful artifact that dates back to the earliest days of the game. Vecna is a powerful lich turned god whose hand and eye (remnants from when Vecna was a mortal) grant unspeakable power. Both the Hand and Eye of Vecna come with a terrible cost - in order to use either artifact, the user must remove their existing eye or hand and then replace it with the artifact.
[...]
Vecna was a major entity in the Greyhawk campaign setting [...]"

The movie, alas, will be set in the Forgotten Realms setting rather than the world of Greyhawk, although I suppose that's to be expected given the centrality of the Realms for contemporary D&D.

I don't have high hopes for this film but perhaps I'll be pleasantly surprised. At the very least it can't be any worse than the 2000 one.

Here's the description of the Eye of Vecna from the 1st edition Dungeon Master's Guide: 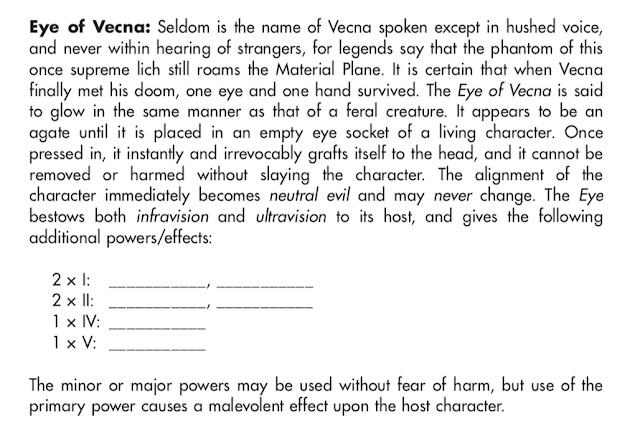 The Hand and Eye of Vecna were among the artifacts that most excited (and corrupted?) my young imagination decades ago!

(Thanks to C. Robichaud for the link to the ComicBook-dot-com article.)
Posted by Akrasia