Dungeons and Dragons news: Dark Tower, Honour Among Thieves, Spelljammer, and some other thing

There were a number of announcements today concerning the near future of Dungeons and Dragons (5th edition).

Among them: the title of the forthcoming D&D film. It’s Dungeons & Dragons: Honor Among Thieves. I actually like that title (despite the infelicitous removal of the “u” from “Honour”). I think a film focusing on thieves (and their associates) could be a lot of fun. Of course, as we all know, the first D&D film was a disaster (worryingly, I note that Courtney Solomon is one of the producers). And I don’t know anything about the other films. But perhaps this one will be decent? We’ll see. (Here is a recent brief description from the star Chris Pine.)

The Spelljammer setting is being “rebooted.” I’m happy for fans of the setting but I never got into it back in the day. That’s not a criticism – I wasn’t really engaged with AD&D during the 1990s. Later I got into Planescape a little bit (primarily thanks to the CRPG) but that’s about it for the 2nd edition settings. Perhaps it was, and will be, great. I might check it out once it’s available. Anyhow, here’s the ENworld page with three “preview videos.”

Also being resurrected is Dragonlance. Again, I’m happy for the fans. But I’ll be passing on this, as Krynn is my least favourite D&D setting.

Of greater interest to me is Goodman Games’ plans for Dark Tower (announced a few days ago). I don’t know whether I’ll take part in the kickstarter but I expect that, barring personal financial collapse, I’ll get this once it’s available in gaming stores. 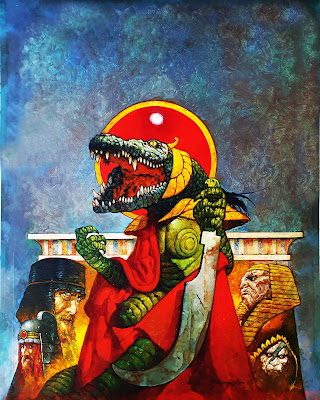