I’ve always found the Second Age of Middle-earth intriguing. One reason is that, unlike the First and Third Ages, it is not a period during which any of Tolkien’s primary stories occur, and hence remains somewhat mysterious. Unlike the First Age, human civilization matures during this time and becomes more than a mere imitation of that of the Elves. Also, unlike the Third Age, it’s not a kind of twilight era of slow decline: human civilization reaches its peak with Númenor, and even after its fall its successor kingdoms Gondor and Arnor successfully secure a future for the most virtuous survivors of the lost island realm. In addition, during the Second Age there remains vital, active, and important Elvish realms (Lindon and Eregion in particular).

The Age’s overarching themes of time and mortality greatly appeal to me as well. The latter theme can be seen most vividly in the rise and corruption of Númenor. The fall of the mighty kingdom, its turning away from the Valar and the Eldar, is primarily because of the Númenoreans’ bitterness with respect to the “curse” of mortality. This theme also appears in the temptation that the nine rings of power have for mortal men. Time afflicts the ageless First Born as well. It is during the Second Age that Elvish efforts are made to render the realms in which they dwell as timeless as themselves – indeed, such power was a primary motivation for the three rings of power forged by Celebrimbor.

Finally, Sauron is a rather intriguing antagonist during most of the Second Age. He’s a fair deceiver – “Annatar,” the Lord of Gifts – capable of fooling both men and (some) elves, rather than simply the hideous powerful creature he becomes following the fall of Númenor.

For these reasons (among others) I’ve long thought that the Second Age would make an excellent role-playing setting. It’s “open” enough to give game masters a lot of room to create new stories and adventures – especially on the main continent, outside of the western Elvish realms – but nonetheless firmly embedded in the amazingly rich history and mythology of Middle-earth.

So, when I first learned that the forthcoming television series (Amazon’s “Rings of Power”) would be set during the Second Age, I was cautiously excited. Alas, my excitement has cooled quite a bit. But it looks like we’ll be getting a new book – The Fall of Númenor – this fall, probably because of the series. (I suspect that the publishers were at least in part motivated to produce and release this book with the event of the Amazon series.) 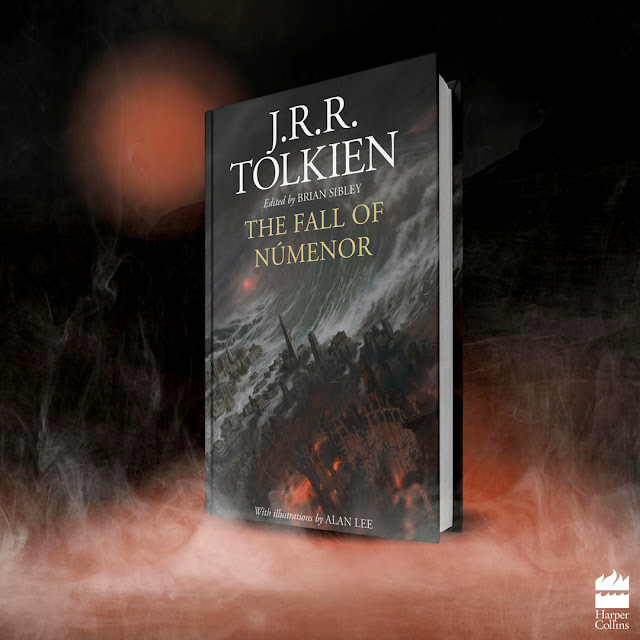 Here's the blurb (taken from the Tolkien FB page):

We are proud to announce the publication in November 2022 of The Fall of Númenor by J.R.R. Tolkien, edited by writer and Tolkien expert, Brian Sibley, and illustrated by acclaimed artist, Alan Lee. Now available to pre-order: https://smarturl.it/TheFallofNumenor

Presenting for the first time in one volume the events of the Second Age as written by J.R.R. Tolkien and originally and masterfully edited for publication by Christopher Tolkien, this new volume will include pencil drawings and colour paintings by Alan Lee, who also illustrated The Lord of the Rings and The Hobbit and went on to win an Academy Award for his work on The Lord of the Rings film trilogy.

J.R.R. Tolkien famously described the Second Age of Middle-earth as a ‘dark age, and not very much of its history is (or need be) told’. And for many years readers would need to be content with the tantalizing glimpses of it found within the pages of The Lord of the Rings and its appendices.

It was not until Christopher Tolkien presented The Silmarillion for publication in 1977 that a fuller story could be told for, though much of its content concerned the First Age of Middle-earth, there were at its close two key works that revealed the tumultuous events concerning the rise and fall of the island-kingdom of Númenor, the Forging of the Rings of Power, the building of the Barad-dûr and the rise of Sauron, and the Last Alliance of Elves and Men.

Christopher Tolkien provided even greater insight into the Second Age in Unfinished Tales of Númenor and Middle-earth in 1980, and expanded upon this in his magisterial 12-volume History of Middle-earth, in which he presented and discussed a wealth of further tales written by his father, many in draft form.

Despite the possibly mercenary motivation for producing this book, it should be a solid scholarly work. It’ll be great to have the history of the Second Age presented in a coherent unified single work. And I’m always happy to see more of Alan Lee’s artwork!