Trailer for Dungeons and Dragons: Honor Among Thieves

Here’s the poster for the forthcoming Dungeons and Dragons movie: Dungeons & Dragons: Honor Among Thieves. 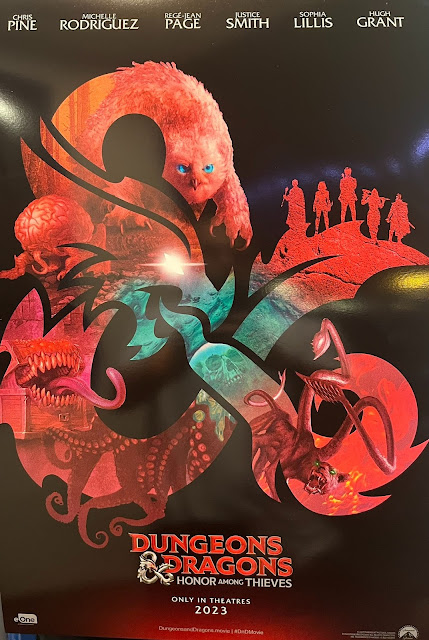 As you might note, it looks like there’s an owlbear, mimic, brain devourer, displacer beast, and probably a mind flayer (or something with tentacles) in the movie.
And here’s the trailer.
Some of the monsters mentioned above (owlbear, mimic, and displacer beast) appear in the trailer — plus a gelatinous cube and, of course, some dragons (black and red).
It looks rather heavily loaded with CGI. I guess that’s to be expected. The trailer is a bit too “busy” for my tastes. But the tone seems irreverent, which is good. And I quite liked the bit with the lute at the end. It could be a fun fantasy romp. I hope it is!
If you have twenty minutes to kill, here’s a breakdown of the trailer from Chris Perkins and Todd Kenreck, focusing on the monsters and some of the locations for the movie. Unsurprisingly, it is set in the Forgotten Realms (Sword Coast region).
Addition (22 July 2022): Here's a list of the main characters and their D&D classes: