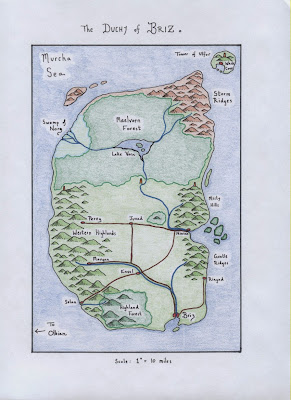 The Duchy encompasses a medium sized island (roughly 80 miles north to south, and 40 miles east to west), off the eastern coast of the Island of Ilmahal. The northern third of the island is dominated by a shadowy woodland called the Maelvorn Forest. Beyond the forest, on the northeastern corner of the island, are some wild highlands called the Storm Ridges. The southern part of the island consists of fertile farmlands and river valleys, though rocky hills dominate the eastern and western coastlands.

The island – called ‘Brohn’ in the ancient Morghain tongue – was inhabited by a couple of relatively peaceful Morghain clans for many centuries until it was conquered by Aphorian legions twelve centuries ago. The island was abandoned by its human population approximately four centuries ago, when the Aphorian Imperium withdrew its legions from Ilmahal. Much of the island was overrun subsequently by disorganized bands of humanoid savages (goblinoids and forgrim). These bands settled in the abandoned Aphorian villages and forts that dotted the island, and fought amongst each other in a disorganized fashion for many years.

Approximately 225 years ago, a troop of mercenaries and adventurers led by the renowned warrior Flavius Briz landed in the ruined southern port of Irylond. Briz and his followers subsequently re-conquered the southern part of the island, slaying thousands of humanoids and driving the remainder into the dark Maelvorn Forest to the north, or the Storm Bridges beyond. Flavius Briz then declared himself duke of the island, renamed the port Irylond after himself (now simply ‘Briz’), encouraged the resettlement of the farmlands, and established three guard towers to protect the southern island against future humanoid incursions. Over the subsequent decades, a number of freemen from southern Ilmahal, tempted by the prospect of establishing their own farms and businesses, settled in the duchy, contributing to its wealth and stability.

Most of the duchy’s human population live in the southern part of the island. The one exception is the fishing town of White Cove, which is considered part of the Duchy. The present Duke of Briz is Duke Aelig Briz II. A small number of furtive Waldleuti dwell in the southern Highland Forest. A handful of Vadhre traders live in Briz.

The nine towns of the Duchy:

1. Briz. (Formerly called ‘Irylond.’) The capital and only sizable town in the duchy. It is a moderately cosmopolitan cultural and economic centre, and hence the only place where the Vadhre have a permanent trading base.

2. Solan. A fishing village on the southwestern coast. A number of ancient Morghain cairns can be found to the southeast of the village.

3. Riagad. A fishing village on the eastern coast. A couple of small copper mines in the nearby hills provide additional revenue for the town. Riagad has a reputation for being dull.

4. Ninian. Another fishing village on the eastern coast. Sometimes called ‘Old Foggy’ because of the cool mists that perpetually form off the coastal hills. An important lighthouse lies a few miles to the northeast of the village, the residence of the mage Karthedon.

5. Juvad. A trading village surrounded by a number of grain farms. The ale and lager served by ‘The Golden Grain’ are famous throughout the duchy.

6. Envel. Envel is surrounded by farmland. In addition to grain, some farmers near Envel grow an unusual crop – pumpkins.

7. Maugan. A small town located in the coastal highlands. It supports a few nearby silver mines.

8. Pereg. A highland town surrounded by farms to the east, and a large temple devoted to Amithos and the Solar Court to the west. Many religious subjects of the duchy make pilgrimages to the temple. It is well known for its potent whiskey (‘Pereg’s tears’), which is somewhat popular with the temple’s clergy.

9. White Cove. The second largest town in the Duchy, White Cove dominates a small rocky island to the north of the dreaded Storm Ridges. The tower of the powerful wizard Ulfor – a friend of the Dukes of Briz – overlooks the town. Ulfor is the formal ruler of the island, holding the title of ‘baron,’ although he typically delegates responsibility for day-to-day affairs to White Cove’s mayor.

Three imposing guard towers stand at the southern border of the Maelvorn Forest to limit forgrim and goblinoid incursions into the civilized lands of the south.

Other areas of note:

Highland Forest. A small forest made up of a mix of deciduous and coniferous trees. A number of small Waldleuti settlements are scattered throughout the forest. The Waldleuti avoid contact with outsiders. Some ancient Morghain barrows are said to exist in the wooded hills.

Maelvorn Forest. A dark and grim forest, the Maelvorn dominates the northern part of the island. Many tribes of forgrim and goblinoids live scattered throughout the woods. More dangerous and unnatural creatures are rumoured to dwell deeper within. Legend suggests that a few Alfar ruins can be found near Lake Vorn.

Misty Hills. As their name suggests, these hills typically are covered in mist formed by moisture blown in from the Murcha Sea.

Western Highlands. An imposing range of rocky hills that dominates the western coast of the island. A number of ancient Morghain cairns can be found throughout the highlands. Local tales speak of an ancient Aphorian monastery somewhere within the northern hills, concealed by mystical means.

Storm Ridges. An unpleasant, broken land, with little vegetation, the Storm Ridges primarily consist of reddish and black rocky hills. Sailors and fishermen regularly report seeing a mysterious, ancient tower on one of the highest hills on the northern part of the ridges, near the Maelvorn Forest. No one who has ever investigated the tower has ever returned.

Swamp of Norg. A fetid marsh covered in a perpetual miasma of evil. According to legend, the swamp was created many centuries ago following a great battle between a demon lord and a great Morghain hero. Sailors have reported seeing mysterious barges leaving the swamp in recent years.