So, gentle readers, here is an overview of my homebrew 'swords and sorcery' setting Ilmahal. It is meant to be used with all of my 'swords & sorcery' house rules. 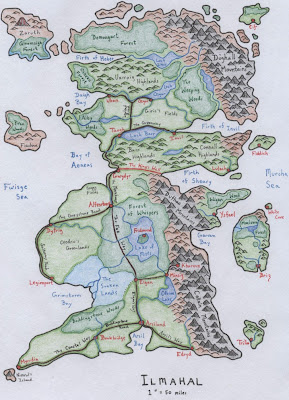 The island of Ilmahal is slightly smaller than the island of Britain. It resembles Britain in terms of geography and climate, except for the fact that Ilmahal has a number of small but imposing mountain ranges along its eastern coast. It exists in the northern part of the world of Ilden. Culturally and politically, Ilmahal somewhat resembles post-Roman, Dark Ages Britain. The southern portion of the island was once the northernmost province of a great empire, the Aphorian Imperium. After the collapse of the Aphorian Imperium, Ilmahal descended into a dark age of chaos and barbarian invasion. Two centuries ago the southern portion of Ilmahal was united into the Kingdom of Olbian, which resembled pre-Saxon ‘Arthurian’ England. Alas, Olbian collapsed after its second king failed to produce an heir. Since then, the realm has been divided amongst petty kingdoms, city-states, and bandit lords, all struggling against each other – and against the many vile sub-human tribes that ravage the land – for supremacy.

An Absurdly Brief History of Ilmahal

In the time before the rise of human civilization, a people from the plane of Faerie – the Alfar – arrived in Ilden. On the isle of Ilmahal, the Alfar established the Kingdom of Adalbrikt (which means ‘noble and bright’ in the Alfar tongue). Adalbrikt lasted many eons, during which time humans lived as primitive feral creatures, away from the viridian cities and emerald towers of the Alfar. Also during this time some small, scattered clans of furtive Vadhre (a culturally sophisticated subterranean race distantly related to humanity) established underground towns in the mountains of eastern Ilmahal.

The last Eldar War, roughly 3500 years ago, ruined the Kingdom of Adalbrikt, and the surviving Alfar entered into a period of gradual decline. Some centuries later, the ‘Morghain’ – the human peoples of Ilmahal – emerged as a distinctive culture. Feeling some affinity with these human peoples, the grim Vadhre taught the Morghain the art of metallurgy, as well as the essential elements of magic. The Alfar, who thought of humanity as little more than wild beasts, were disgusted by this development, and withdrew even more into their enshrouded fey enclaves.

Around 2000 years ago a great empire arose to the south of Ilmahal. This empire was called the ‘Aphorian Imperium,’ and over time it conquered the entire continent of Rylindar (the island-continent a hundred miles to the west-southwest of Ilmahal). Approximately 1200 years ago the Aphorian Imperium conquered the southern parts of Ilmahal. They ruled this province – which they called ‘Arsilonia’ – for some eight centuries. However, they eventually were forced to abandon Arsilonia because of an event called ‘the Devastation’ which destroyed the ancient Alphorian capital and plunged the empire into a bitter, ultimately self-destructive, civil war.

Shortly after the collapse of the Aphorian Imperium, the northern Vadhre towns and strongholds were lost to hordes of vile sub-human tribes (goblins and the like) – all led by a powerful, enigmatic being known only as the ‘Golden Prince.’ Also around this time, a small Morghain island to the west of northern Ilmahal called Fiachna was conquered by ‘blue’ Forgrim pirates. (The Forgrim are a savage race of humanoids distantly related to humans. The term ‘blue Forgrim’ is used to refer to sea-faring bands of Forgrim.) Raids from Fiachna have troubled the western coasts of Ilmahal ever since.

Hope returned briefly to the southern lands of Ilmahal some two centuries ago with the establishment of the Kingdom of Olbian by Emrich Silverdrake. Olbian included the lands that previously were part of the imperial province of Arsilonia – all of the lands of the people now known as the ‘Arsilonians’ (the people of mixed Morghain-Aphorian descent). In order to defend his kingdom against raids by humanoids and Morghain brigands from the north, King Emrich built a great wall along the northern marches of his realm. Sadly, King Emrich’s son, King Fredigar Silverdrake, failed to produce an heir – consequently, the Silverdrake crown (a powerful artifact forged for the kings of Olbian by the arch-mage Nimrul) has since languished unworn. The kingdom broke apart within a decade after Fredigar’s death.

Today, the island of Ilmahal is a divided land. In the north, the scattered clans of the Morghain fight off raids from the many hordes of humanoids (goblins, forgrim, gnolls, and the like) that threaten them – many of which are under the sway of the mysterious Golden Prince. To the west the island of Fiachna remains a haven for forgrim and ‘mangrim’ (humans with forgrim blood) pirates. Only the mysterious Republic of Cif, in the far northeast, seems secure and wealthy, despite the cold winds that assault it for much of the year. In the south, the Arsilonians live in a number of city-states and petty kingdoms, the shards of the once strong Kingdom of Olbian. The taciturn Vadhre of the Duthac and Collain Mountains interact on civil, if aloof, terms with the surrounding Arsilonians, trading finely crafted tools and weapons for food and liquor. Nonetheless, many Vadhre long to reclaim their lost holds within the Dughall Mountains from the much despised Golden Prince. The Alfar of the Forest of Whispers and the mysterious city of Fridmund remain entirely indifferent to the affairs of man.